Musings on the Sentencing of the Umbrella Nine 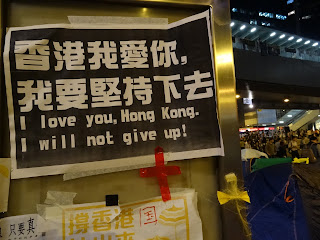 Two weeks and a day after the pro-democracy activists now collectively known as the Umbrella Nine were found guilty of public nuisance charges by district court judge Johnny Chan, sentencing was carried out on eight of the nine.  Two of these individuals (Law professor Benny Tai and retired sociology professor Chan Kin Man) were given 16 month prison sentences; two others (League of Social Democrats vice-chairman Raphael Wong, social worker-lawmaker Shiu Ka Chun) got eight month jail terms; three others (Reverend Chu Yiu Ming, Democratic Party veteran Lee Wing Tat and former student leader Eason Chung) received suspended jail sentences of varying lengths; while the youngest of the group (former student leader Tommy Cheung) was given a community service order of 200 hours.
As expected, opinion is divided along partisan lines as to whether the sentences meted out were too harsh or lenient. The blogger behind The Big Lychee summed it up as follows: "If you consider the fact that the accused hadn’t done anything wrong by Hong Kong’s old (pre-2014) ‘1 Country 2 Systems’ standards, the charges, trial and sentences are an outrage. But if you buy the story that the defendants caused citywide chaos and misery, the penalties could be described as ‘lenient’."
When the news of the Umbrella Nine's sentencing broke yesterday, I felt less sadness and shock on the whole than I had thought that I would.  On reflection one day on, I think this was partly because, in view of these individuals having faced a maximum of seven years behind bars (for the parts they (allegedly) played in inciting tens -- if not hundreds -- of thousands of people to Occupy Central and a number of other parts of Hong Kong), the sentences they received were actually not as terrible as I feared (even while, of course, wishing for far better).  In addition, my sense is that the whole thing is still not yet over; and this not least because sentencing for one of the group, lawmaker Tanya Chan, has been postponed for at least one and half months in the wake of the shocking revelation that she has a brain tumor that urgently requires surgery.
On the legal front, there are options to appeal the sentences -- and it is looking like at least three of the convicted individuals will go ahead and take their battle to the higher courts.  And, more generally, if the sentencing judge thought that the sentences he meted out would serve to deter those seeking genuine universal suffrage, self-determination and other political freedoms for Hong Kongers from doing so in the future, I believe he's very much mistaken.  Actually, if anything, I think that he's added fuel to people's frustrations, anger and sense of injustice -- and I sincerely hope that he hasn't made them feel that the non-violent route that the Umbrella Nine had advocated and adhered to is a dead end.
Posted by YTSL at 9:43 PM