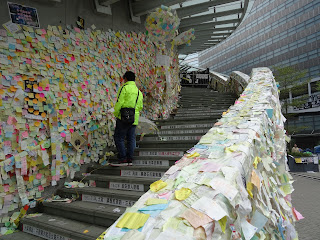 Reading the writing(s) on the (Lennon) Wall


Two days ago, a Hong Kong court found nine pro-democracy campaigners guilty of charges of varying levels of public nuisance pertaining to the street protests that took place in various parts of the territory close to five years ago.  A week earlier, I had attended a screening of the extended version of a documentary film by Evans Chan featuring interviews with a number of these individuals along with other political activists like Agnes Chow, Ray Wong and Alex Chow.


A sequel to his Raise the Umbrellas (2016), We Have Boots documents the government backlash, especially in the past few years, against those making calls for genuine universal suffrage for Hong Kong that have been ringing out for decades but were particularly loudly voiced in the latter part of 2014.  An apparent work in progress that has been added to and updated since I viewed an earlier version of this cinematic labor of love last November (and may well be added to and updated again in the (near) future), it includes footage of protests in Tung Chung over the influx of Mainland Chinese daytrippers in the wake of the opening of the Hong Kong-Zhuhai-Macau Bridge last year and memorial events in honor of Liu Xiaobo held in Hong Kong in 2017 as well as from the 2016 Legislative Council swearing-in ceremony whose repercussions Hong Kong continues to feel, and the pro-democracy camp to reel from).


Whereas Evans Chan's 2016 coverage of the Umbrella Movement and its aftermath had concluded on a positive note, the thought-provoking We Have Boots may leave viewers sympathetic to the cause in two minds at best, and feeling down and at a loss at worst.  It's not just that, in picking up where Raising the Umbrellas left off, the filmmaker had to chronicle multiple setbacks for Hong Kong's political opposition, including the disqualification of a number of politicians who had been voted into the Legislative Council by thousands of voters in 2016 and also budding politicians seeking elected office (including Demosisto's Agnes Chow) and the conviction of a number of political activists (on charges that seem dubious or outright unfair).


Rather, it's also how a number of Chan's interviewees, among them four members of what has come to be known as the Umbrella Nine, appear to envision their and Hong Kong's (near) future.  More specifically, there looks to be a sad acceptance that those seeking self-determination -- forget independence -- for Hong Kong are going to be rigidly opposed by the authorities and punished, including with years of imprisonment.  And while a number of these individuals feel it is their duty to press on regardless, their examples don't actually come across as all that massively inspiring any more.

In view of their knowing -- not just fearing -- that political prosecution and persecution is in their future, it is perhaps only logical that their thoughts often tend to turn inwards and towards how to deal with the ordeals that they will be undergoing.  It also doesn't help that more and more paths seem to be closed to people seeking to agitate for a fairer deal for Hong Kong than Beijing is willing to give; this not least since, in delivering his verdict on the prosecution of the Umbrella Nine, presiding judge Johnny Chan has stated that civil disobedience is not a defence for a criminal charge.


Amidst all this doom and gloom though, We Have Boots actually -- and rather surprisingly -- contains some moments of levity; with such as comments made during interviews with the likes of Alex Chow and Chan Kin Man getting viewers at the screening of the film that I attended chuckling and even laughing out loud.  Perhaps some of the jokes made can be seen as gallows humor but I'm also inclined to see hope for those who retain a sense of humor in the face of adversity -- and also seek to learn from trying experiences they expect to undergo.


The Nicki Giovanni poem that inspired this documentary work contains lines about laughing all through the storms that are bound to come.  Where Do You Enter concludes with the following lines:-

We have umbrellas
We have boots
We have each
other

And it is true enough that there do remain a good number of people out there seeking genuine democracy from Hong Kong and who thus are not alone in their quest, however quixotic it may seem to be.