Caring for and thinking about the environment while at the beach 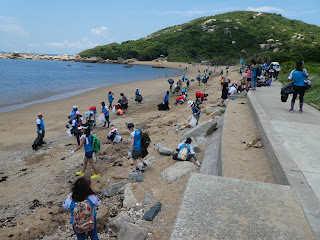 Beach clean-up on Lamma on Sunday 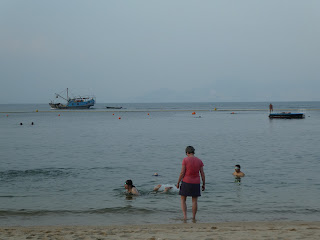 View from the beach at Cheung Chau yesterday
Late last week, I returned from Spain to a Hong Kong experiencing a record-breaking heat wave -- and although I wish it wasn't the case, the "very hot weather" warning days have continued into this new week.  Having already decided some months back that I'd halt the monthly Cheung Chau beach clean-ups I've been organizing for the past year or so (and taking part in for even longer) when summer came along, I ended up also cancelling this month's beach clean-up after foreseeing a low turn-out, given the demanding conditions, but also because I had signed on some time back for another beach clean-up the same weekend over at Lamma.
Organized by (some of) the same folks behind the emergency beach clean-ups prompted by the palm oil spill last summer, the long planned event in aid of the green turtles which have been known to nest on Lamma's Sham Wan beach attracted over 2,000 volunteers, many of them Filipina and Indonesian helpers on their Sunday off, despite the searingly hot temperatures.
Although we were originally scheduled to clean the beach at Sham Wan, it seemed that the government had been freaked out by the idea that so many civilians would descend on that sandy beach -- and probably more so, at the thought that we'd find it a mess rather than that we'd make it so -- that on the day itself, it deployed some 100 Marine Police to clean the beach and also had been having others going hard at it for the two weeks immediately before that!
Rather than decide that there no longer was anything we could do, the participants of the #cleanforturtles event went ahead and set to cleaning up the beach next to Sham Wan.  Shek Pai Wan, about an hour's hike away from the main Lamma ferry pier, was scoured for trash, in particular  microplastics that newly hatched baby turtles often fatally mistake for nutritious food and end up ingesting early on in their consequently prematurely shortened lives.

As one of the event participants remarked: you think the beach is clean but it turns out to not be so when you look closer.  So often what looks like sand turns out to be a plastic microbead or a kernel of styrofoam -- and I speak from experience when I tell you that they can be more difficult to pick up and get rid off as well as spot than larger items of trash such as the plastic bottles and styrofoam boxes that I must admit to being really upset by when I see them strewn about a beach that could otherwise be oh so beautiful.
One day later, I took a friend visiting from the US and her 10-year-old son over to Cheung Chau.  Learning from the previous day's experience, we planned our excursion for the latter part of the day, when things were a few blessed degrees cooler than a few hours before.  With the added pleasure of sea breezes helping to fan the island at times, Cheung Chau managed to charm once more.
Spying the beach and water early on during our visit, it was inevitable that the boy would end up happily splashing about in the sea for the greater part of an hour while his mother and I watched from the shore (though it's also true enough that his mother also would be unable to resist going and dipping her toes -- and a bit more! -- in the water for a few minutes).  And this especially since the mother had remarked on how clear the water was and we had seen the sign pronouncing that the beach water quality was indeed optimally high there that day.
Sitting on the beach that's among those looked after by the Leisure and Culture Services Department (LCSD), I tried to enjoy myself too for the most part but couldn't help noticing the microplastics, pieces of glass and cigarette butts that still could be found on Cheung Chau's Tung Wan Beach.  To be sure, much of it wasn't all that obvious unless you made a point -- like I had done -- to look.  Even so, I wish it wasn't the case: that is, that we don't usually think something is a problem unless we actually notice it as well as that we don't seem to care that much for the environment in which we live, play and move about, and -- this with regards to the air -- breathe.
Posted by YTSL at 10:40 PM