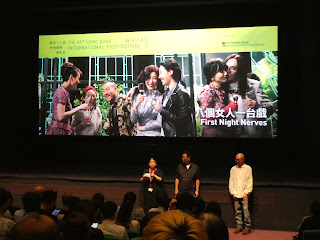 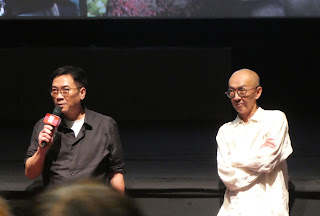 First Night Nerves (Hong Kong-Mainland China, 2018)
- Part of the Hong Kong International Film Festival's Gala Presentation program
- Stanley Kwan, director
- Starring: Sammi Cheng, Gigi Leung, Bai Baihe, Kam Kwok Leung, Angie Chiu, Catherine Chau, Qi Xi, Kiki Sheung
After it had its world premiere at the Busan International Film Festival in October last year, I eagerly looked forward to checking out Hong Kong auteur Stanley Kwan's first feature length Hong Kong work since 2005's Everlasting Regret in his home city.  What with my not having gotten any word of a cinematic release for First Night Nerves in the months afterwards, I worried that there was a problem with the movie until I saw it appear in the 43rd Hong Kong International Film Festival's Gala Presentation program -- with screenings at the over 1,700-seater Grand Theatre of the Hong Kong Cultural Centre and the venue where much of the film takes place: Hong Kong City Hall.

In an interview published by the Hong Kong International Film Festival Society, Stanley Kwan shared that: "A couple of years ago the Hong Kong government suggested demolishing City Hall.  A lot of people were against the idea and of course the plan was called off.  But the news reminded me of the many times I'd used the building -- going to film festivals, seeing stage plays and concerts -- so I told my scriptwriter [Jimmy Ngai] that it might be interesting to come up with a story set in and around City Hall, using the place itself as a background and filling it with colorful characters"; with the highly entertaining cinematic offering that came out of it being the one that I was in the audience at Hong Kong City Hall to see one evening last week.
A female-dominated work whose Chinese title roughly translates into English as "eight women, one stage", First Night Nerves stars two luminaries of music and screen as thespians appearing together on stage in a period melodrama about two estranged sisters.  Sammi Cheng is Xiuling, a once shining star making a reluctant return to acting in the wake of the death of her husband in a play produced by her wealthy sister-in-law (Angie Chiu), while Gigi Leung plays Yuwen, a glamorous younger actress secretly intimidated by having to share the limelight with Xiuling as well as regularly put off by the criticisms that the play's director (Kam Kwok Leung) throws her way as well as by the helmer's eccentric ways.
Set in the week leading up to their play's opening night, First Night Nerves also features Bai Baihe (described by Stanley Kwan in the post-screening Q&A as the Meg Ryan of China) in an atypical role as Fusha, a super rich lesbian who has been a fan of Xiuling's ever since she was a child; Catherine Chau as Yuwen's personal assistant cum long-time friend, Yilian; Qi Xi as Nini, Xiuling's personal assistant cum confidant, who also happens to be a relation of Fusha; and veteran actress Kiki Sheung as the City Hall general manager who is up on the latest celebrity gossip and thus has quite a bit of knowledge along with definite views about certain of the personalities who are literally in her space for a time.
A multi-layered ensemble drama-comedy which is full of local references and entertainment industry in-jokes, First Night Nerves is one of those works that will be a particularly fun watch for audience members who are "in the know", or at least sufficiently clued in to realize that certain seemingly improbable occurrences in the film (such as a billionaire offering a fortune to the man who can win the heart of a lesbian relation) actually were inspired by real life events that took place here in Hong Kong.  Often over-the-top in a way that accentuates its comedy quotient, it looks to be Stanley Kwan's funniest and most enjoyable film in years, if not ever.
At the same time, however, this is an offering with lots of points to make and messages to deliver.  While there's no fear of it getting untolerably pedantic, First Night Nerves does require its audience to be open minded enough to accept -- and like -- its characters, who have quite the range of personalities and also sexual identities.  My sense is that even if one initially isn't, Jimmy Ngai's smart and sassy script -- which gives more than one supporting character in this film more complexity, dimensions and cool moments than is found in many other works' protagonists -- still will entertain you for much of the movie, if not win you over by its conclusion.
My rating for the film: 8.5
Posted by YTSL at 11:54 PM