While hiking with three friends one beautiful afternoon from Wong Nai Chung Gap to Stanley via Violet Hill, the focus during the first part of our outing was on the many scenic views to be had, and which I considered fair compensation for trekking up to two -- rather than one -- of Violet Hill's three peaks.

Actually, even after we were done with the most difficult part of the hike once we got to Tsin Shui Wai Au and opted to go along the Tsz Lo Lan Shan Path to Stanley (rather than the route that would have taken us up and down the Twins), a fair few view bonanzas still awaited us.  But truly, the most memorable sights while walking along a trail that borders a catchwater for much of the way involved a number of critter spottings, a number of which were considerably creepier than others... ;b 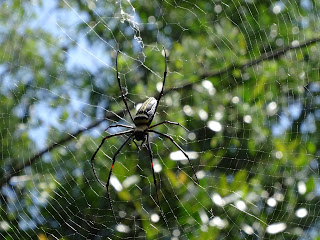 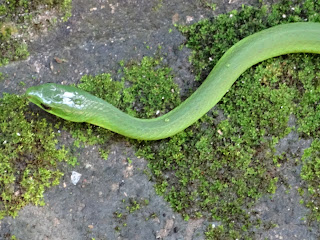 Those with a fear of snakes also may want to give this
photo-essay a wide berth... ;S 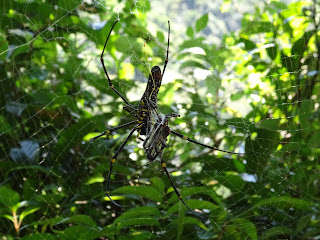 The creepiest sight of all in my eyes: a spider that considers
other members of its own species to (also) be fair game! :O 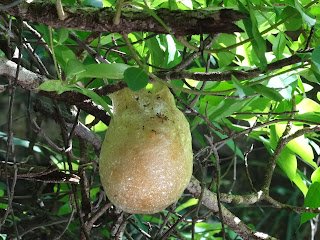 The nest of insects that instinct told me that I absolutely
shouldn't be near and/or disturb... :S 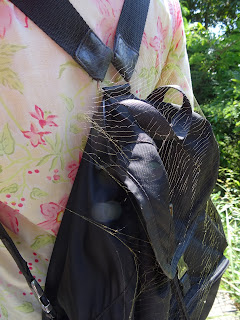 What can happen when one walks too close
to a spider's super sticky web! 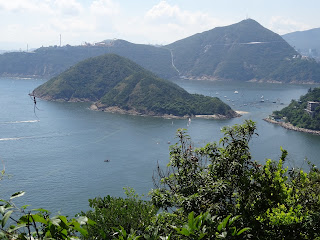 A scenic view, with a spider and parts of a web in the picture 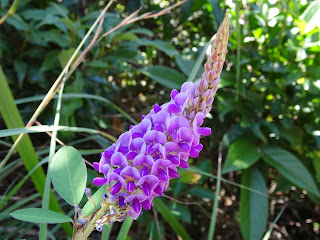 No creepy creatures in the photo for a change ;) 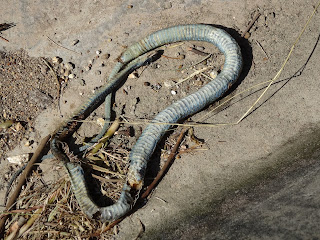 Will the creepiness never end?  A long dead snake
whose decaying sight still can make one shiver...

A panoramic view bonus (do click on the image to enlarge it)
for those of you who've made it thus far down the page! :)
Posted by YTSL at 6:37 PM

1. That green snake looked poisonous;
2. What is the size\volume of that 'nest' of sort? The photo looked sort of foamy.....

I can't quite decide to this day whether that green snake was a not poisonous Greater Green Snake or the considerably more venomous Bamboo Snake. Either way, I was glad that I was further away from it than the photo (taken with a zoom lens) may make you think!

Am not sure about the volume but reckon that the nest was about 30 centimeters high. I've seen that kind of material before: it's not foamy but, rather, kind of solid and sticky...

Ugh.... If it is that big it is certainly a nest. Just I am uncertain if what's within would bit or sting.

Anyway, if you do not see sentries in formation near the nest it is unlikely to be a wasp hive. I have encountered wasp hives in close quarters twice. (Once along the path from Tung Chung to Ngong Ping, just before reaching Po Lam Monastery, the other in the woods in Wong Juk Yeung, Sai Kung).

Usually you should be able to hear the buzzing from a short distance. For these encounters I was alone and had to drift away in extreme slow motion between the sentries.....

I could imagine if it was a group going through the proximity of the hive with someone freaking out when they saw the wasps.......

If you click on that image, you should be able to enlarge it and see more clearly the insects on the surface of the nest. Maybe then you can identify them (for me)!

But yes, I've seen wasp hives before and heard the buzz of the wasps. Whenever I hear the wasps buzzing, I pray that the trail I'm on won't go too close to their hives and -- touch wood -- I've been lucky that way thus far. ;S

I downloaded the photo and blown it up on screen. Those look like wasps. However I don't recall seeing the nest of a hive in such a shape. Are they on the surface facing the camera or behind it?

Maybe they are a migrating hive and building a new nest.

From what I could see, the bugs were on the surface of the nest/ball thing with their backs to the camera.