In Phuket despite it not being a place I particularly wanted to visit ;( 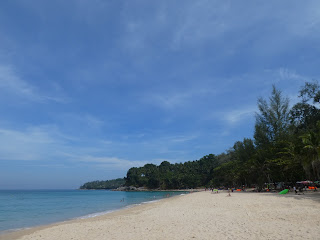 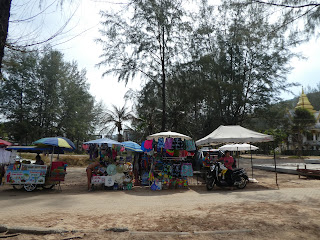 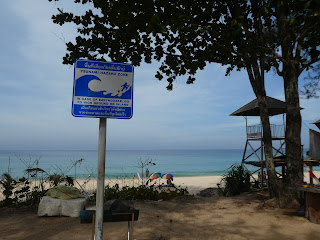 A reminder that Phuket was hit by the 2004 Indian Ocean tsunami
This time last week, I was in Phuket, Thailand; having flown there from Penang, Malaysia, where I had flown over to from Hong Kong the day before.  Those who know me well would be absolutely correct in thinking that this Thai locale would not be anywhere near the top of my "places I want to visit" list -- and it's true enough that I reacted with horror after doing some research on Phuket in the weeks prior to my trip there and realizing that it's primary attractions involve sun, swimming, sand and spas.
Suffice to say here that my reason for agreeing to go to Phuket wasn't the usual tourist one.  As it turned out though, the hotel into which I was booked was indeed one located right by a beach -- and I ended up going there twice out of a sense of obligation to check out an attraction that was about the only one that I could get to on foot from where I was staying.
The first time, it also was to view the sunset -- which was pretty enough to sooth my soul somewhat.  The second time around, it was on the morning of the day of my departure from Phuket -- and, because of the blazing heat that was typical of what I encountered on my visit to this Thai island, I only lasted about 15 minutes before beating a hasty retreat to the air-conditioned confines of my room!
The Russians who appear to be particularly attracted to Phuket may have loved the 36 degree Celsius high temperatures but I found it pretty unattractive and hard to tolerate.  In addition, I actually found, to my great surprise, that Phuket's much vaunted beaches are less visually attractive than some I've been on in Hong Kong (e.g., I think Sai Kung's Tai Long Wan and Long Ke, and Lantau's Cheung Sha beaches has the one in Surin beat), never mind those to be found in the likes of Okinawa!
As it turned out, it was a good thing too that I (also) hadn't planned to spend time in a spa having a massage or such since the spa in the Phuket hotel I stayed in was -- unannounced on its website -- closed for renovations!  Instead, I spent a good bulk of my daylight hours venturing far away from Surin itself as well as its beach -- and it was on my visits to other parts of the island (and, on one day, over on the neighboring mainland section of the country) where I was happiest on this Thai trip.
Posted by YTSL at 11:29 PM

Oh I went to Phuket and stayed at The Surin last year and loved it so much that I actually have spent ALL my vacation by the beach not going anywhere else in Phuket. At noon I went to my room for a siesta and at night I went out to see what is there to eat (the only thing I didn't like there was the food) and lots of restaurants had Russian menus and signs. Other than these times I was at the beach from early morning to sunset. Reading and swimming to my heart's content.

I do like Koh Samui better than Phuket (better beaches and better coconuts).

Wow, "eliza bennet", I didn't think you'd be the luxury beach resort type! Also, aren't there good/better beaches over in your part of the world?

And yes, I'd agree with you re the food. The problem at Surin was that the Thai food had been noticeably modified to suit those tourists who can't deal with the usual Thai levels of spiciness and consequently ended up lacking in overall flavor. (And this was at the restaurants that didn't have Russian menus which I figured it'd be good to avoid.) As I said to my mother, I feel like I can get better and more authentic Thai food in Kowloon City than Surin!

"Wow, "eliza bennet", I didn't think you'd be the luxury beach resort type! Also, aren't there good/better beaches over in your part of the world?"

I never knew this about myself either but it turns out that I'm :) I loved the beach and the sea so much there. And yes there are much better beaches in my country but not at the time I visited (I think it was at the end of October last year). Although with the amount of Russians I saw during my dinner forays, it felt a bit like home at times :)

I, OTOH, like beaches -- but there's no way that I could be satisfied with making them the focus of a vacation. It doesn't help that I'm not a fan of getting into the sea. Just looking at and photographing -- and moving about on big motorized vehicles in -- those bodies of water is fine by me!

Re the Russians: I didn't realize they were such a big presence in Phuket until I arrived at Phuket airport and saw that the signs there were in Thai, English, Chinese and Russian! Did you?

Oh I love the sea, the only sport I can safely say I'm very good at is swimming -I'm not fast but I have technique and endurance- and there is nothing like swimming in the sea. When there are a lot of waves (like in Surin) it is a different sort of fun, just to play with the waves and jump up and down etc.


I didn't realise it too, in fact I didn't even notice the signs at the airport. But when I went out for a meal I saw them all. And the menus were all in Russian. Actually tourists from Russia are very nice. Pretty much all they need is alcohol and sun and they never bother other people or staff.

Take care should you return to Surin Beach and opt to swim in the sea there again...

Oh that beach is dangerous and I saw that right away. Meanwhile I applaud the Surin approach to safety when sometimes the staff had to warn people one by one to stick to the one side of the beach, or in one case get out of the water, but not to worry, I have swum in more dangerous waters and a good swimmer knows when to get out - especially in an ocean.

Your posts about the island are fun though if I go there one more time maybe I'll visit those places too :)

I'm amazed that you're consider visiting Phuket again. On the other hand, one visit there's enough for me!

I want to visit another island closer to Phuket (30 minutes boat ride from Phuket I'm told) for yet another lying by the beach and reading sort of vacation. So if the former happens I may take a tour the last day before my flight.

And I would want to visit Surin and its lovely beach again :)

I know you tend to revisit places you like. But while I share your love for Hong Kong and Japan, I most definitely do not for Phuket in particular and Thailand in general.