A threat of drought in Hong Kong's future? 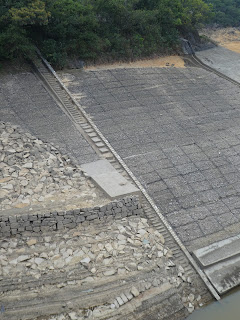 The water level is so low at Tai Tam Upper Reservoir
that it's off the scale! :O 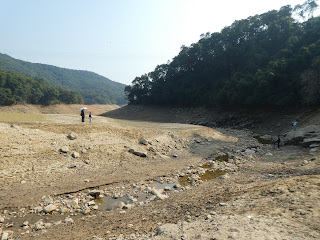 Even more eye-opening is how people can walk on dry land
that's usually underwater over at Aberdeen Lower Reservoir!
In recent months, I've been hearing from various friends about how the weather has been on the weird side in their parts of the world; with those living in various parts of Japan, London, New York and even Chicago complaining about how they've been getting much more snow than usual.  In turn, I've reported about how we've been having unusual weather in Hong Kong too; with it having been a good deal drier this spring as well as recent winter than I'm used to.
There are those who'd argue that I shouldn't complain about getting finer weather than usual -- and it's true enough that I've felt rather blessed at times by how many sunny days of (relatively) low humidity Hong Kong has had thus far this calendar year.  But while out hiking in the likes of Aberdeen Country Park and Tai Tam Country Park in recent months, I've been shocked to discover how low the water levels of the reservoirs within those country parks have got -- and reckon that this is something people should be concerned about.
If Hong Kong were still largely reliant on the reservoirs for its water supply, then we would be in deep doo-doo.  Even so, there is a sense that something's seriously wrong when one sees how low the water levels are at the likes of Tai Tam Upper Reservoir -- and also how dirty brown-looking the water there has become.
So low have the water levels gotten in such as Aberdeen Lower Reservoir that sizable sections of dry bed have now been exposed -- which people have taken to feeling that they can safely as well as casually walk onto!  When doing so, it still feels rather novel -- and I hope that this remains the case.  Put another way: It surely would not bode well for Hong Kong if one of the consequences of climate change is for there to be drought in this part of the world since, among other things, it's not as though the territory is getting water from places so far away that they won't be similarly affected like the Big Lychee!
Posted by YTSL at 10:56 PM

I checked and found the current storage status (https://www.wsd.gov.hk/en/core-businesses/operation-and-maintenance-of-waterworks/waterworks/current-storage-position-of-impounding-reservoirs/index.html) and it showed a little bit over 60% of total local reservoir capacity.

Owing to the thunder storms in the past few days I think the reservoirs should have been replenished a little bit. Shouldn't be too bad, for now.

Thanks so much for that link. I didn't know such a page existed! Noticed when I checked it out that Aberdeen Lower Reservoir and Tai Tam Upper Reservoir are among the reservoirs whose current water levels are way below capacity. Re the thunderstorms: have you been getting much rain in your area? It's been more cloudy than truly rainy where I am!

The southern district had been a bit wet in the past few days. It was raining earlier today. Hope the catch water is getting some feed from the hills.

I was out in Aberdeen Country Park again this afternoon. Have to say that things aren't still looking that great as far as the reservoir water levels are concerned. If Hong Kong were still mainly reliant on the reservoirs for water, I'd say that we'd be having water rationing at this point!