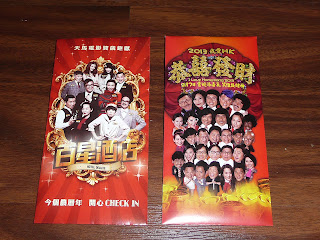 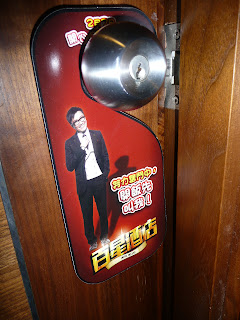 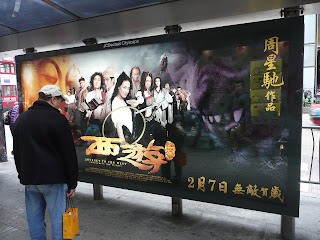 A passerby checks out the large Journey to the West:
Conquering the Demons poster at a bus stop

Kong Hei Fat Choi once more on the fifth day of Chinese New Year!  And while this Thursday brings a few new releases into Hong Kong cinemas (a few of which are romance themed as befits today also happening to be Valentine's Day), I'm glad to report that the three local Chinese New Year movie offerings still are playing on many screens -- and that advertising for them continues to be on prominent display in various parts of the Big Lychee.


The early reports had Stephen Chow's Journey to the West: Conquering the Demons selling more tickets than the Raymond Wong Pak Ming produced, Vincent Kuk helmed Hotel Deluxe and Eric Tsang produced, Chung Shu Kai-helmed I Love Hong Kong 2013.  (The same reports also, very disappointingly to my mind, had the mediocre A Good Day to Die Hard besting them all at the Hong Kong box office -- and I can but hope that the Hong Kong movies will find a larger audience in the films' second and later weeks of release.)

I have to confess to the trailer for Journey to the West: Conquering the Demons having put me off wanting to watch it though, so it's the one Chinese New Year movie that I've yet to view.  At the same time, a friend has told me that it's actually pretty good... if you don't think of it as a conventional Chinese New Year movie since it's got much more violent action than comedy.  And, also, that Hsu Chi -- an actress who I like far less than many others -- actually doesn't figure as prominently in the film as she does in the Hong Kong posters for the movie.  So maybe I'll catch it some time before its theatrical run ends.


In contrast, the trailer I saw for Hotel Deluxe got me eager to check it out.  And I also appreciate its promotional giveaways -- including decorative red packets, mini packets of tissue paper and novelty door hangers!  All in all, I think that the folks behind this very Hong Kong comedy which I thoroughly enjoyed viewing have worked the hardest at promoting their film -- and come up with creative ways to advertise the movie along with the more conventional posters at bus stops and in the MTR, and advertising on buses and trams. To wit, I was amused to find images of Sandra Ng in her Hotel Deluxe role plastered in the toilets of the President Theatre when I went to view I Love Hong Kong 2013 earlier this week!

I'm not sure if it was planned but I Love Hong Kong 2013's advertising looked to have appeared the latest of this year's three Chinese New Year movies.  And unlike with Journey to the West: Conquering the Demons and Hotel Deluxe, I didn't see any trailer(s) for the TVB film production whose story contains elements plucked from American Christmas favorite, It's a Wonderful Life. Still, in time for Chinese New Year, I found myself in possession not only of I Love Hong Kong 2013 themed red packets but also door decorations -- both of which I have indeed put to use this New Year of the Snake! :)
Posted by YTSL at 10:55 PM