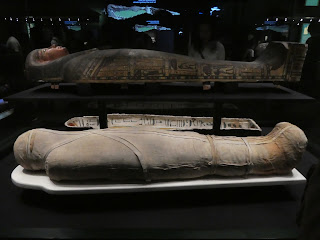 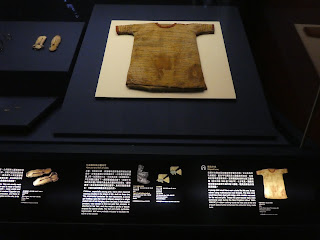 What looks like a stained striped t-shirt but really is not! 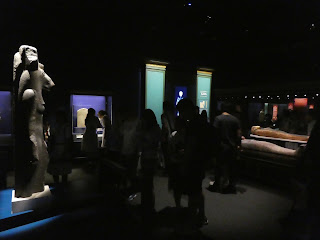 Some 200 Ancient Egyptian artifacts on (temporary) loan
from the British Museum here in Hong Kong
Until I went to the Hong Kong Science Museum earlier this week to check out its Eternal Life: Exploring Ancient Egypt special exhibition (which runs through to the 18th of next month), I had only ever been inside its lecture hall (which hosts Hong Kong International Film Festival screenings  and also is a venue for a number of other special film screenings) and public toilet (usually before or after a film screening at its lecture hall!).  One reason is because descriptions of its exhibitions tend to make them sound more geared for children than adults.
In addition, this particular museological establishment is one of the most popular in Hong Kong, so my vision of it includes crowded, noisy exhibition halls.  But whereas the areas of the museum where the temporary special exhibition about death and life in Ancient Egypt had been installed were indeed full of busy on the afternoon that I visited it, I guess I can at least count myself fortunate that the crowd actually wasn't as full of chatty and loud individuals as it could have been (especially given the young age of some of its visitors)!
Given the superstitious fears that many Hong Kongers have, I was rather surprised that this particular exhibition appears to be so well attended (with a local friend who had been to see it earlier than me having described the exhibition area as being "as crowded as Mongkok")!  Actually, I also was pretty taken aback to find that this particular exhibition that's jointly presented and organized by the British Museum and the Hong Kong Science Museum is an official event commemorating the 20th anniversary of Hong Kong's Handover to China by the British.
To be sure, it's a bumper exhibition alright.  But let's face it: even with its title emphasizing life, it really is about death -- with the visitors not only being surrounded while in the display areas by artifacts associated with people who are very much dead but also were found in their tombs and such!  Put another way: it does seem much less a celebration of life per se than an examination of how people (who lived thousands of year ago as well as thousands of miles away) dealt with death and the dead.
Furthermore, among the artefacts -- and, indeed, the exhibition's highlighted items -- are six mummies of deceased individuals who may have died as well as lived between 3,000 and 1,800 years ago but still are as human as you and I.  And if one somehow managed to be unaware that this was indeed the case, numerous digital visualizations appear on various screens in the exhibition areas of those mummies' skeletons and such, complete with identified pathological conditions.
The point about our common humanity particularly struck home when I found myself gazing at a piece of clothing that looked like a stained striped t-shirt.  It turns out that it's a striped tunic from the Coptic Period and more than a 1,000 years old.  But I really could very easily imagine it being worn by a  young boy (or girl) living today!
As someone who has long been interested in Ancient Egypt, I figured I'd find the Eternal Life: Exploring Ancient Egypt exhibition to be worth the HK$30 (~US$3.84) admission fee (despite it being HK$10 (~US$1.28) more than the usual Hong Kong Science Museum entry fee).  What I hadn't banked on was that I'd actually end up spending close to three hours at the museum, some of whose permanent displays I also got lured into checking out!  Put another way: I continue to think that Hong Kong museums are a real bargain price-wise since they often do offer up pretty good museum-going experiences. :)
Posted by YTSL at 11:26 PM