Two films viewed at the HKIFF this past Wednesday 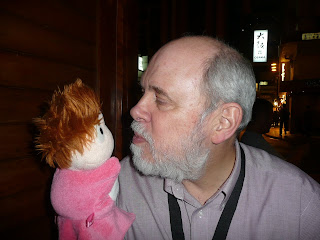 Puppet Ponyo this past Wednesday evening
with a film prof friend in town for the
Hong Kong International Film Festival :)
This past Wednesday, I took a day off from work to take in two afternoon screenings at the Hong Kong International Film Festival. And before the fest comes to a close, I'll have taken another day off work to watch films screened at times when I otherwise would be in the office. For while visitors from overseas lament that they usually can't afford to be in Hong Kong for the entire festival, those of us who work here tend to gripe about the many screenings we can't attend because they take place during office hours.

All of our complaints notwithstanding though, the committed film fans among us still do end up catching quite a few HKIFF offerings -- and the truth of the matter is that however much we moan, it often is the case that the Hong Kong International Film Festival is the highlight of our annual film-going -- and sometimes even social! -- calendar...
Good Morning to the World!! (Japan, 2010)
-From the Asian Digital Competition programme
- Satoru Hirohara, director
- Starring Yoichiro Koizumi, Mio Arai and Mutsunori Izumi

How does one go about deciding on what films to watch at a mega film festival featuring over 500 films from all over the world? Often, I rely on what I've read and/or heard about a work. At other times, I look at the names of their directors and/or stars and trust that those with a good track record will have come up with another gem. Another factor that can convince me to give a film a chance -- in terms of plonking money for a ticket to check it out -- is if it's won a prize at a significant film festival or awards competition.

Seeing as Good Morning to the World!! won the prestigious Dragons and Tigers Award for Young Cinema at the Vancouver International Film Festival last year, I figured that 23-year-old Satoru Hirohara's first feature film would be a notable work to view. And this digital work revolving around an alienated schoolboy on the cusp of adulthood looked to have also impressed some worthy members of its audience here in Hong Kong as it went on to be given a Special Mention in the Fipresci Prize competition at the HKIFF.

If truth be told, however, I actually was distinctly unimpressed by this movie whose own director seemed somewhat apologetic with regards to his work at the post-screening Q&A session -- to the extent of making it a point to inform the audience that the film had been shot at a different number of frames per second ratio from what he actually thinks is preferable!

In any case, there's no hiding that visually, the film just didn't look very good -- bar for its final extended scene which looked nice but seemed to leave the story's conclusion far too open-ended for my liking. And while I am inclined to be less negative about the sound than a fellow audience member who told the director that he thought the chosen music often seemed too ill-fitting (and consequently distracted from the story that was unfolding on screen), I also was not particularly impressed by this facet of the work.

All this I would overlook if the offering's story and/or protagonist had sufficiently intrigued. But the life of a withdrawn teenager who tends to over-internalize his thoughts and feelings, even after he discovers that a homeless person he regularly passes by on his way to and from school has died and decides to take it upon himself to look for people related to the deceased man, just wasn't made out to be all that involving in this movie whose most interesting bit might well be its title having not one but two exclamation marks.

In short: I found Good Morning to the World!!'s proceedings and film style to be disappointingly dull and mediocre, even if not outright terrible. And while its youthful director may have shown some promise with his debut feature work (notably in his choice of lead actor in the form of the even more youthful Yoichiro Koizumi), my own feeling is that he needs to mature quite a bit more before he'll make a work that I will come away from a viewing feeling really satisfied, let alone wowed by.

My rating for the film: 5

For some reason or other, this year's HKIFF has shaped out to be one in which I've viewed a number of films that have been lengthier than the 90-120 minute lengths that tends to be the norm for feature films (with the 5 1/2 hour long Carlos taking the prize in this regard). In addition, there have been a couple of offerings that I wished would have ended earlier than they ended up doing.

On the other hand, Kwan Pun Leung and Amos Lee's "making of" documentary of Wong Kar Wai's Happy Together is a work that I wished hadn't been so short -- clocking in, as it did, at a mere 59 minutes -- though, to be fair, it does manage to jam in quite a lot of information as well as evoke its share of memories and moods into its less than hour long package.

An authorized documentary, it contains interviews with Wong Kar Wai (who reveals he suffered a stroke while filming in Argentina!) and Tony Leung Chiu Wai (who talks about being so homesick for Hong Kong while in South America that he dreamnt of his mother!!) as well as elects to get the viewpoints of two ethnic Chinese who seem more comfortable in Argentina than anywhere else in the world in Happy Together's production secretary (Leticia Yeh) and person in charge of continuity (Aili Chen). It also contains footage from the finished film -- and seeing Leslie Cheung on screen made me remember with a start and sigh how handsome and charismatic he was.

Undoubtedly the highlights of the work though are the opportunity to view footage that didn't make the final cut of Happy Together -- including brief segments showing Tony Leung Chiu Wai in a crowd that Argentinian football great Diego Maradona walks by and Leslie Cheung in drag and longer and more substantive sections featuring Shirley Kwan (whose character was infamously completely excised from the finalized version the film). There also are minutes of footage showing Leslie and Little Tony taking tango lessons -- and here I have to state that a tangoing Leslie (be it by himself, partnered by Little Tony or somebody else altogether) makes for quite the mesmerizing sight.

In addition, this documentary provides reminders of how wonderful are the music selections in Wong Kar Wai's movies -- and how big a part they play in establishing and evoking moods. The standout song in this work is a song sung by Shirley Kwan (who also contributed to Fallen Angels' soundtrack with Mong Gei Tak (trans. Forget Him)) entitled Cucurrucucu Paloma. (N.B. I've found a version of Cucurrucucu Paloma sung by a male voice on Youtube but actually think Shirley Kwan's version is superior to it.)

Part of me wants to re-watch the 1997 Wong Kar Wai film just to see if her version of the song made it final cut -- yes, I confess it's been so long ago since I last viewed it that I can't remember this -- but another part of me thinks nothing can beat seeing as well as hearing Shirley Kwan singing that song as the 1998 documentary allowed one to do. At the same time though, Buenos Aires Zero Degree also makes me understand why Shirley Kwan's character ended up being cut out of Happy Together. Put another way: the work is great both for showing the interesting bits there were left out of the final version of Happy Together but also confirming that Wong Kar Wai made the right choice after all by having not included them, however good they are in of themselves!

I have been meaning to see Buenos Aires Zero Degree for years! Thanks for the write up and jogging my memory. I will have to do a double bill w/ Happy Together soon. One of WKW's best! Thanks again, YTSL! =)

The thing that stayed with me most from Buenos Aires Zero Degree is that how I admire the directing style of WKW. He let Tony feel home sick on purpose so that his performance will reflect the genuine feelings. I actually felt very sorry for Tony when I saw the docu. Even though in the film all my sympathies lies with the character Leslie acted.

Glad I jogged your memory re "Buenos Aires Zero Degree" and hope you'll enjoy your viewing double bill of it and "Happy Together". :)

I'm not sure that I'd consider WKW's directing style to be admirable but it certainly is interesting! ;b

WHat fun you have!
I liked Happy Together; wish I could see this documentary.

The documentary is available on DVD. It's just that the last time I checked, it was on the expensive side -- hence my deciding to wait to see it... for a cheaper price and on a big screen to boot! :b

Yes, Puppet Ponyo does seem to have a lot more fun than her other plushie sisters! ;D

Whoops, I'm 5 years late, but stumbled here when I was rewatching Buenos Aires Zero Degree (editing my own making of documentary of a Japanese director I was working with in Penang last month, needed some inspiration, hehe)

Anyway, yeah, Shirley Kwan's rendition of Cucurrucucu Paloma is stunning, but sadly it didn't end up in the final cut. Caetano Veloso's version was the one playing during the majestic waterfall scene at the beginning of the film. (There's also a scene of Veloso singing this song in Almodovar's masterpiece Talk To Her)

I find it really cool that there are people reading my older blog posts still -- and seeing new comments on them makes me happy!

Thanks for pointing out whose version of "Cucurrucucu Paloma" ends up in the final version of "Happy Together" -- and for naming the singer too. :)