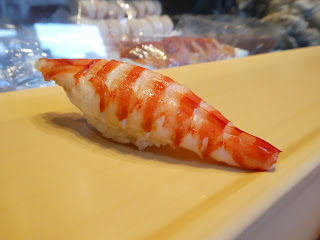 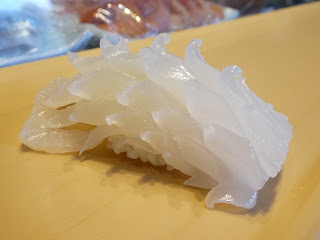 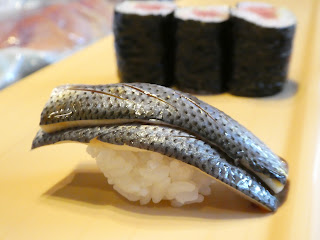 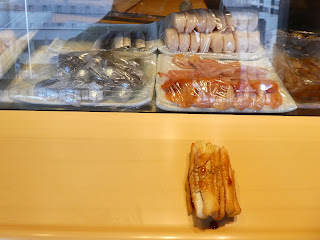 Anago (sea water eel) sushi, with so many other toppings
I wanted to try behind glass in the background!
Considering how much I love to eat sushi, it can come as a surprise to those who know me that I don't eat sushi every day whenever I'm in Japan; and this particularly since, almost needless to say, there's so much delicious sushi to be found in the country where this delicacy was invented and it also being the case that so much of it is a good deal less expensive than you might expect (with my actually never ever having paid more than 10,000 Yen (~HK$739 or US$94) at a sushi-ya in the Land of the Rising Sun; and my regularly paying one third what I would do in Hong Kong for the equivalent quality).
One big reason for this is that there are so many foods I want to try and/or want to eat when I'm in Japan, including regional specialties (such as Hiroshima-style okonomiyaki, Osaka kushiage, Obuse's kuri okawa and Funabashi's sauce ramen!) that are hard to find in other parts of the country, let alone beyond Japan's shores.  Still, it's true enough that I frequently end up going to a sushi-ya for the final meal of each of my Japan trips!

On this most recent Japan trip, the restaurant in question was a sushi-ya located in Kawabata-dori, Fukuoka's oldest shopping arcade.  When looking at Tenjaku's understatedly shop front, I got a really good feeling about the place and I also thought that its advertised lunch set was a pretty reasonable 4,320 Yen (~HK$319 or US$40) since it consisted of an appetizer, bowl of chawan mushi (steamed egg custard), sides of pickles, miso soup and dessert (which turned out to be a super large and sweet seasonal Hakata Amaou strawberry) along with seven kinds of nigiri sushi and one order of maki sushi.
And so it proved, with Tenjaku's chef/owner proceeding to serve up some of the best sushi I've ever had in my life (and most definitely the most worth it in terms of quality at its price point)!   And yes, I know that is indeed quite the claim but just look at the photos at the top of this blog post!  Put another way: Look how big that tiger prawn and consider that the portion of rice on which it was placed on top is a regular sized portion for nigiri sushi; check out how masterfully cut the slice of squid I was served was; and just marvel at how beautifully shiny was that delicious slice of gizzard shad that I had at the restaurant!
Speaking of beautiful: I must admit to being one of those people who often makes happy noises and will let Japanese chefs know how I oishii I find the food they have prepared.  But I don't think I ever told a chef how beautiful I thought the food he put in front of me as many times as I told Tenjaku's chef/owner over the course of that one meal I had at his restaurant!
And on the subject of the chef: one big contributing factor to my thorough enjoyment of my lunch at his sushi-ya was my interactions with him, which included him obviously wanting to see and hear my reactions to the sushi he served up, and appearing to derive quite a bit of pleasure from witnessing how happy his creations made me!  In addition, thanks to a friendly customer able to speak English as well as her native Japanese (who, much to my surprise, was the only other customer there in the restaurant the entire time that I was there), we got to chat quite a bit -- and I also got to add two more slices of nigiri sushi to my overall order.
On occasions like this, I wish I had a greater stomach capacity than I in fact do.  If so, I'd have happily ordered even more sushi to eat at Tenjaku!  As it was, I reluctantly stopped myself from asking to try the akagai (ark shell clam), awabi (abalone) and other hikarimono (shiny blue/silver-skinned fish) I saw in the glass cases on the sushi counter besides the kohada and sayori (Japanese halfbeak) I couldn't resist getting.  And while I know there are people who'd be horrified at the thought, the main reason why I didn't try kujira (whale) sushi at Tenjaku was because I felt too full to eat anything as fatty looking as it by the time I spotted it in the glass case and asked the chef what that was!
For those wondering what else I ate: I definitely remember eating a decadent piece of chu toro (medium fatty tuna) nigiri sushi and also delicious pieces of ikura (salmon roe) and uni (sea urchin) gunkan maki.  And while I cannot recall which were the two other types of nigiri sushi I was served, I think I can state with some confidence that they were pretty tasty affairs too! ;b
Posted by YTSL at 11:59 PM

That semi-translucent Ika is the most beautiful piece of Ika I've seen! 4000-ish yen sounds like a really good deal for the whole dinner.

I ended up paying closer to 7,000 Yen for my lunch as I also drank a couple of glasses of nice nihonshu and got two more slices of nigiri sushi on top of the lunch set. Even so, I thought I got a pretty good deal, price-wise and also quality-wise! Tenjaku really is one restaurant I can unequivocably recommend to you. :)