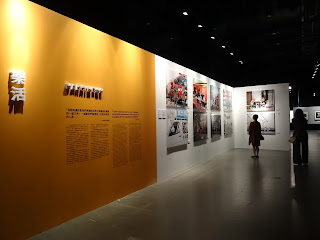 The 1000 Families exhibition being held at Artistree 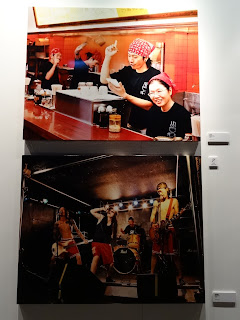 Two photos from Masashi Asada's Asadake series
If what's written on its website is to be believed, the biennial Hong Kong International Photo Festival is a pretty big deal, having "attracted tens of thousands of visitors, creating a photographic ethos and fostering the art and culture of photography in Hong Kong".  But, in all honesty, I didn't realize that the fourth edition of the festival which began in 2010 was taking place until I read about the 1000 Families exhibition at Artistree on the Bluebalu: Living in Hong Kong blog; and it's only been in the past week or so that I've noticed advertising for the festival in general and this exhibition in particular on such as a tram and a few billboards around the city.
Running from August 8th to September 4th at the cavernous 20,000 square foot multi-purpose Artistree in Quarry Bay, the 1000 Families exhibition features works by 13 artists, of whom the three most prominent are Japan's Masashi Asada, the late Ho Fan (AKA Fan Ho, as the Shanghai-born photographer-filmmaker's name would be written in the USA, where he made his home late in life), and Yang Shaoming, the photographer son of Yang Shangkun, the President of the People's Republic of China from 1988 to 1993.  Seeking to provide a multi-layered definition of "family", the exhibition groups the photos into and under three themes: happiness, love, and memory.

If truth be told, I didn't really "get" those concepts when going through the exhibition.  And for that matter, I'm not totally convinced either that there truly are 1,000 families depicted in the works -- or even that there genuinely are 1,000 photos on display at Artistree!
One big problem that I -- and a friend who had gone along with me to check out -- had with the 1000 Families exhibition is that its text is not well presented at all: with way too many words being emblazoned on the introductory panels, way too small fonts used for some of the accompanying texts and other sorts of problems that this sometime museologist finds pretty irritating, not least because they really could have been fairly easily avoided or remedied.  In addition, the inclusion of entries for the 2015 Photoeat Competition in this exhibition seemed to have occured primarily for numbers- and content-padding reasons; and it didn't help that the manner in which they displayed made it hard to really appreciate any of the photos individually.
Yet, I'd consider my trek to Artistree worthwhile because there actually are works in there which catch the eye and grab one's attention.  Among these are Masahi Asada's commemorative photographs of his family on holiday, during which they make a point to stage situations in which they amusingly role-play as pretty much everything ranging from campaigning politicians to ramen shop workers, intimidating-looking yakuza to a wild-looking rock band in concert!
Next to Asada's colorful -- both in spirit and visually -- works, those of Yang Shaoming initially appear pretty mundane until one gets realizing that among the people shown in candid shots having a laugh with their grandchildren and relaxing in their living room reading a newspaper are Chinese Communist Party luminaries such as Deng Xiaoping and Hu Yaobang.  Then there's the black and white works of Ho Fan, whose photographs of ordinary folks on the streets of Hong Kong back in the 1950s are absolutely evocative as well as so beautifully framed that they can appear to have been staged, only they really weren't.
As the proverbial "they" say, a picture paints a thousand words.  And not only do the works of photographic talents like Asada, Yang and Ho confirm this but they also convey a wonderful sense of the fun (Asada), humanity (Yang) and beauty (Ho) that being part of a family along with greater community can invest in individuals.
Posted by YTSL at 11:59 PM

Glad you made it! I can't understand why events at ArtisTree are always so poorly promoted and hard to find out about...

I've been to a few very well-attended events at Artistree in the past -- including free HK Sinfonietta concerts. But the promotion of events there looks to have dropped (in quality/quantity) in recent years.

BTW, I wrote in the survey form for this exhibition that I found out about it via your blog -- which is entirely true! :)