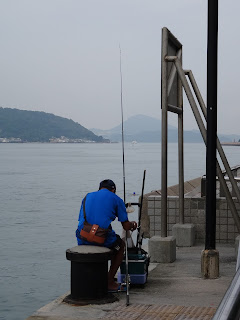 Would you swim in -- or, for that matter, eat
any fish caught in -- Victoria Harbour?! 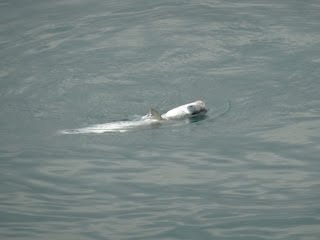 This particular after seeing this fish behaving
abnormally in that same body of water... :S
Last Saturday afternoon, I took advantage of a break from the rain that's been coming down quite a bit over the past few weeks to walk from Shau Kei Wan to North Point.  With visibility not being all that great, I tended to gaze out less at the opposite side of Victoria Harbour while strolling along the Quarry Bay Park waterfront promenade and more at the body of water itself along with the land on which I was on -- which is how I got to noticing a couple of unusual sights in the water close to the Hong Kong Island side of the harbor.
While I grant that human swimmers are way more common than, say, pink dolphins or whales, I must admit to finding it surprising to see any of these living beings in the waters of Victoria Harbour!  And although I have seen people swimming in Victoria Harbour on a couple of occasions before, the fact of the matter is that there is a designated swimming area (complete with shed and wooden pier) over at Sai Wan and the waters off Siu Sai Wan seem less busy than those off Quarry Bay and Sai Wan Ho (from where ferries go across the harbour to Kwun Tong and Sam Ka Tsuen, near Lei Yue Mun.
Yet it was in that very stretch of Victoria Harbour that I spotted a man swimming rather nonchalantly about in the water, sometimes seemingly riskily close to my mind to the anglers with their long rods and even longer lengths of fishing line!  And I know that I was not the only person who was surprised to see that swimmer out there as I saw quite a few other follks gawking at him and taking pictures of their own!
Speaking of risky: I must admit to being of the opinion that Victoria Harbour is a pretty polluted body of water -- with the amount (and variety) of boats that go about and through it as well as the amounts of rubbish (including way too many plastic bags, particularly of late) that can be seen floating in it.  Consequently, I can't help but think that it's not all that safe to eat fish that have been living in Victoria Harbour -- which is what I assume at least some of the anglers one regularly see out fishing at places like Sai Wan Ho and Quarry Bay do with their catch!

This perspective was given credence later during my walk when I caught sight of a surprisingly large fish behaving strangely.  Actually, given that it was swimming in circles and had its mouth out of the water for much of the time that I observed it, I think it's probably safe that that poor creature looked to be struggling to breathe, and for life.

I realize that in 2011, the waters of Victoria Harbour were deemed clean enough for the annual cross harbour race to resume after a hiatus of more than 30 years, and that it's attracted thousands of willing participants.  I also am fully aware that the Hong Kong Chief Executive known as 689 proposed earlier this year that swimming and fishing areas be set up in Victoria Harbour so that office workers working in places like Central could go swimming or fishing during their lunch hour if they were so inclined.

But I honestly find myself wincing whenever I see people jumping into the waters of Victoria Harbour in a Hong Kong movie (such as 2004's Escape from Hong Kong Island) and applauding the actors involved for their willingness to do so.  And even on the hottest of days, you can't convince me that it'd be a good idea to go for a soak in this body of water that I am far happier sailing on in one of the many ferries that cross it daily and take their passengers through it to and from the likes of Mui Wo, Cheung Chau and Peng Chau!
Posted by YTSL at 11:59 PM