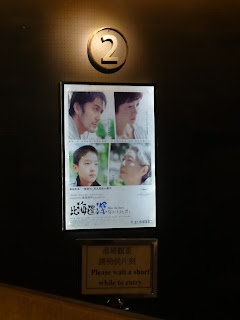 The sight that greeted me while I waited to go into
a screening of After the Storm here in Hong Kong
After the Storm (Japan, 2016)
- Hirokazu Kore-eda, director and scriptwriter
- Starring: Hiroshi Abe, Kirin Kiki, Yoko Maki, Taiyo Yoshizawa
There are some movies that leave so little impact on their viewers that just a day or so after viewing them, they can hardly remember what those efforts were about, or actually really care.  That's not the case for every one of Hirokazu Kore-eda's films that I've viewed thus far; including the emotionally devastating Nobody Knows (2004), moving Still Walking (2008), magical I Wish (2011), satisfying Like Father, Like Son (2013), absolutely delightful Our Little Sister (2015) -- and also this year's After the Storm.

Indeed, my appreciation for this family drama that reunited the director-scriptwriter with two of the stars of Still Walking and bears some thematic resemblance to that earlier film has increased with each passing week since I viewed it; not least because it has enabled me to get over Kore-eda's new work not having the warm exuberance that made Our Little Sister such a delight and realize that After the Storm does indeed very much possess the sort of emotional depth as well as complexity that I've come to expect of this auteur's offerings.
Like in Still Walking, Kirin Kiki (who also had appeared in Our Little Sister, Like Father, Like Son and I Wish) and Hiroshi Abe (who also had briefly appeared in I Wish) play a mother-son pair.  And as in that affecting 2008 movie about grown children and unfulfilled parental expectations, Abe's middle-aged character has not been satisfyingly successful in life.
A physically towering individual who appears intent on making himself appear smaller he actually is, Ryota had authored a prize-winning novel some one and a half decades ago but is now reduced to pretending that he's moonlighting as a small-time private detective "for research purposes".  Even more emotionally upsetting for him is that he's divorced from Kyoko (Yoko Maki), who he still loves but regularly frustrates because he often gambles away the money that's supposed to be used on their preteen son Shingo (Taiyo Yoshizawa) -- who, again, he obviously adores but nonetheless can't seem to stop letting down.
Recently widowed but remaining full of life and cheer, Yoshiko (Kirin Kiki) continues to live in a compact, cluttered apartment which her tall son often looks to be physically uncomfortable to be in whenever he visits.  Although she's aware of Ryota's failings, it's obvious that she continues to love her imperfect but still relatable offspring, and also have much affection for her grandson -- whose favorite relative she looks to be -- and his mother.  And when all three of those younger individuals end up sheltering from a typhoon at her abode one night, who can blame her for hoping that they will become a family again against all odds?
Slow-moving and subtle rather than grandly dramatic, After the Storm is the kind of movie whose complex characters reveal themselves gradually through small, often subtle gestures and actions.  A masterfully bittersweet drama that's more bitter than sweet (and feels eminently more like a film fashioned by an heir to Mikio Naruse's legacy rather than Yasujiro Ozu's), its story is tinged with regret on the part of more than one individual but also a "life must go on" nonetheless vibe that seems realistic as well as stoic, be it embodied by an elderly woman, middle-aged man or young boy.
Although Hiroshi Abe has top billing and his character dominates the proceedings, 73-year-old Kirin Kiki easily steals the show with her portrayal of a woman with her wits very much intact, and whose advanced age doesn't stop her from continuing to wistfully dream as well as have a comic sense of mischief.  For her part, Yoko Maki quietly shines in a role that could so easily have been much less sympathetic in lesser hands.  And while Taiyo Yoshizawa initially looked out of his depth in the company of such cinematic luminaries, the child actor ended up acquitting himself pretty well, and having a big part in a couple of After the Storm's strongest scenes.
My rating for this film: 8.0
Posted by YTSL at 11:57 PM