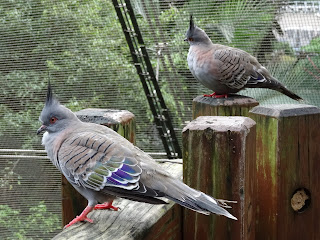 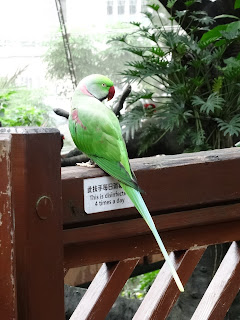 A serious looking Alexandrine parakeet
surveys the scene at the aviary 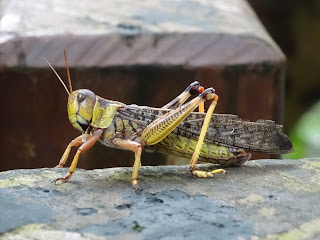 Another large grasshopper spotting -- this time in
the confines of the aviary at Hong Kong Park!


In addition to its many country parks and special areas which cover approximately 44,300 hectares of its total land area of around 110,400 hectares (or 1,104 square kilometers or 426 square miles), Hong Kong also has a number of urban parks and related facilities.  And often after visiting one of the latter, I get to thinking that I really should visit them more often -- since they tend to be pretty convenient to get to and possess some cool attractions.

Take, as an example, the very centrally located Hong Kong Park, with its large aviary containing some 600 birds of 80 species (some of them larger and more colorful than others), tons of different plants and more besides.  Named after the same Governor of Hong Kong who also has given his name to a memorial pavilion in Pat Sin Leng Country Park, the Edward Youde Aviary is around 3000 square meters in size and its highest point is 30 meters -- providing ample room for the birds to hop about,  fly around and find plenty of places on which to perch.


A visit to the cavernous facility makes for a wonderful multi-sensory experience, since many of the feathered creatures whose home it is appear totally unafraid of human visitors and consequently are not shy about being seen and also happy to burst into song.  Adding to the fun of spotting and watching the birds is one's being able to get up close to, and photograph, many of them -- unlike the case with their usually far more skittish cousins found in the wilds of Hong Kong.  And so comfortable do some of the aviary's denizens appear to be in the presence of humans that they will perform mating dances when they're so close to you that the loose feathers they end up shaking off might even fly and brush you!

In addition, on my most recent visit to this central birdwatching spot, I also came across a sign warning of a snake having been spotted in the facility(!) as well as a few other distinctly unbird-like species.  The least attractive of these to my mind was a rat -- which fortunately, was "only" scrambling about on the "valley" floor far below the raised walkway on which humans get to walk.  On the other side of the coin, I have to admit to having gotten pretty happy and excited by the sight of a large and beautiful grasshopper in the aviary -- which, frankly, I'm amazed had managed all this time to elude being captured and devoured by one of the many birds in the area! ;b
Posted by YTSL at 8:44 PM

One of my favourite places in Hong Kong!

I love Hong Kong Park in general and I always make sure I visit the birds. They trimmed down a lot of the trees in the Aviary about five years ago and I don't think it has fully recovered from that. And what happened to the Great Argus and the Pelicans?

The Bali Mynas have become quite friendly in recent years, but my favourite must be the Maroon Breasted Crowned Pigeon.

I didn't realize you're a big fan of Hong Kong park and its aviary! Maybe the Great Argus and Pelicans are great ar hiding from view. I figure there for every bird that doesn't worry about the presence of humans, there are one or even two that are on the shy side, like is often the case when they're out in the wild... ;)

The crested pigeons are beautiful, posted like regal guardians in this aviary which looks to be well worth visiting. This second grasshopper recent photo is a stunner, more armored and primeval than your previous one. And I hope it doesn't get "devoured" by any birds!

I'm glad you like those photos -- and yes, I do reckon that the Edward Youde Aviary is well worth visiting. Also, I totally know what you mean about this second large grasshopper I've seen in recent days being more primeval looking than the previous one -- and, at the same time, with parts whose look I could imagine sci-fi as well as monster movie artists wanting to copy! ;b