Pedestrian precinct(s) in Hong Kong this past Sunday 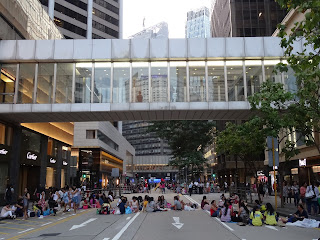 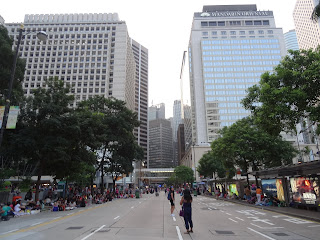 How nice to see a road bereft of cars -- and where
people can safely walk -- in the middle of the city!
Yesterday afternoon, I decided to go check out the 200 meters of Des Veoux Road Central which was going to be car-free for what I mistakenly had thought would be the whole day.  But even though I got to Central too late to see that car-free scheme being effected, I got to belatedly discovering that sections of nearby Chater Road and Ice House Street are regularly turned into a pedestrian precinct between 7am and 12midnight on Sundays and public holidays -- and thereby got to see stretches of road that were car-free after all!
With a carnival-esque atmosphere in effect, the scenes I came across did get me thinking of the car-free spaces of Occupy Hong Kong early on during the Umbrella Movement.  But upon looking closer, it became very apparent that pretty much all the people I saw sitting on the street, dining out al fresco and chatting away with friends, dancing and even doing some flag-waving (to music) were female and Filipina -- and that almost everyone else other than me who were taking photos of the scenes they had come across in the middle of Central were tourists!
For those who not aware of this: there are hundreds of thousands of foreign domestic helpers in Hong Kong; the vast majority of whom are female and hail either from the Philippines or Indonesia.  Over the years, the Filipinas have congregated in Central on their days off (Sundays and public holidays) whereas the Indonesians look to meet up with friends and hang out in Causeway Bay, particularly Victoria Park and its surrounding areas.

When Occupy Hong Kong resulted in sections of Central as well as Admiralty, Causeway Bay and Mongkok being closed off to vehicular traffic in late 2014, jokes were often cracked about how the city's foreign domestic helpers and Umbrella Movement participants had joined forces, and it sometimes being hard to tell where the politically "occupied" spaces and those "occupied" as a matter of course by women who habitually hung out in public spaces on their days off began and ended.
Something else I remember about the Umbrella Movement was, as just one example of its civility, protesters having made a point to stay off the grass of the Cenotaph.  And it was lovely to see that the people hanging out in the vicinity yesterday -- this time for purposes of enjoyment rather than political action -- were giving that memorial space the respect it's due too.
Posted by YTSL at 11:59 PM

The pedestrian zone along Chater Road on Sundays and public holidays had been in effect for decades. Usually it would be occupied by domestic helpers. Some organizations would also hold events and concerts there.

I like to go hiking on Sundays and public holidays -- and generally avoid Central on those days even when I'm not hiking. So I guess it took me a while to realize that there's a temporary pedestrian precinct there on those days even while feeling all this while that it surely is a good thing! ;S