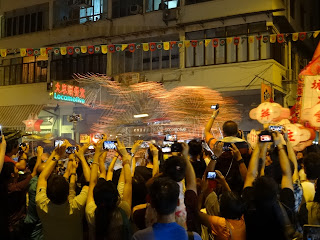 What's that blur of lights in the picture? 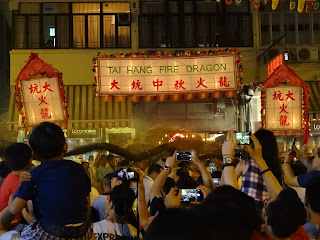 The Tai Hang fire dragon, that's what! ;b 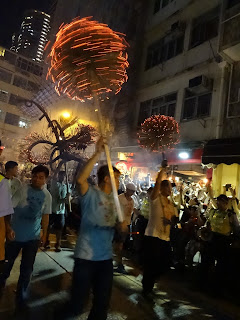 And imagine my joy to get as clear a picture
as this one of its remarkable head! ;b
Today's a public holiday in Hong Kong on account of it being the day after the Mid Autumn Festival according to the Chinese lunar calendar. It's also the day of the Monkey God Festival held in honor of the Monkey King who figures in Journey to the West (and lots of movie adaptations of that Chinese classical novel), Malaysia Day -- and the last of three days this year that the Tai Hang Fire Dragon goes "dancing" in the streets of that Hong Kong Island enclave.
Back in 1880, the then small village by the water suffered a triple whammy in the days leading up to the Mid Autumn Festival.  First, a typhoon slammed into Tai Hang and destroyed many of its houses and other buildings.  Then a plague spread illness in the community.  After a python entered the village shortly after and devoured the livestock, a village elder came up with a plan to stop Tai Hang's spell of misfortune -- or, rather, if the legend is to be believed, Buddha himself appeared in a dream to tell him what the villagers needed to do.
As unbelievable as it sounds, the cure for Tai Hang's woes involved a large "dragon" -- which these days is some 220 feet or 67 meters in length -- made from straw and covered with over 70,000 incense sticks being paraded through the area streets for three nights, guided by two "pearls" (that actually are made of pomelos into which numerous sticks of incense are stuck) and loud drumming.  Even more amazing is that this scheme worked so well that since then, pretty much without fail every year, the ritual has been repeated -- and has become a festive annual commemoration whose fame has spread far and wide!
Earlier this evening, I went with three friends -- two American, one a local Hong Konger -- to Tai Hang to see its fire dragon in action once more.  This time around, the crowd may well have been the largest I've seen to date -- but, actually, better organized too, with the police having been pressed into action along with community representatives.
Also, if truth be told, the fire dragon looked to move slower this year than I recall from previous years.  But while this brought down the excitement quotient somewhat, I'm not going to complain since this made it so that I got better and clearer photos than previously.  Or maybe it's a case of practice leading to improvement, even if not resulting in perfection just yet! ;)
Posted by YTSL at 11:59 PM

I have been there a few times in the past. Even tried to be there a bit after 1700 hrs for front row standing space. That time got hit a few times by some flying jos sticks got spun out of the dragon balls. Got spactacular veiw that night but got a thin layer of ash all over with a few minor burn marks on my hands. Nothing serious though. Took me quite a while to blow all the ashes from my camera with a dusting can.

Long weekend for Mid Autumn Festival, so nice. This type of fire ball is considered dangerous event in Singapore. hahaha....

Wow re your dedication! I've never gone so early to make sure that I'd get prime views of the fire dragon! I've also never been hit by flying joss sticks -- though, last night, I belatedly discovered that the front of my backpack was covered with ash that I'm just going to leave on for now as I like to think that it's like a blessing from the fire dragon itself! ;b

Yes, well, Hong Kong isn't as strict as Singapore in many ways -- though I do sometimes think that it has nanny state tendencies too... ;)