Make a point to go out and vote on September 4th -- if you're a pro-democrat registered Hong Kong voter, that is! 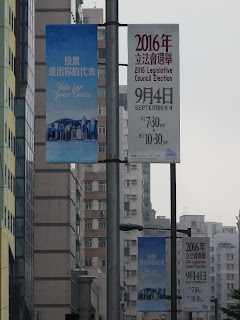 The polling centers for the 2016 Legislative Council Election
will be open tomorrow (September 4th) from 7.30am to 10.30pm 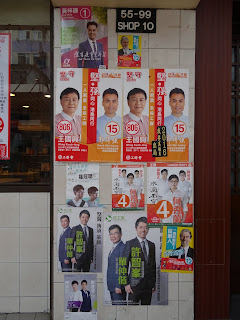 Posters advertising some of the very many
candidates standing for election tomorrow (Sunday)
During the Umbrella Movement, protesters and supporters were urged to register to vote, if they hadn't done so already.  So shortly after I came by my Hong Kong permanent residency status, I promptly went and did so.  And tomorrow, I'll be voting in my first government elections ever.  (Yes, you read that right: i.e., I've never voted in a Malaysian political contest (in large part because I wasn't eligible to do so for most of my life on account of my not having lived that many years in my native country since I turned 21 years of age).  Also, in last year's district council elections, my district had had only one contestant!)
What with the polling stations being open from 7.30am to 10.30pm, I'll be able to sleep in late, have a leisurely brunch and go hiking (if it doesn't rain), and still have plenty of time to go cast my vote!  (And for the record: even if it's really the world's weirdest election, it's still a legitimate one.)  So I would like to urge all my fellow registered voters who are pro-democrats to go and do just that tomorrow -- even while hoping that those on the side of the pro-Beijing individuals will feel disinclined to do so!
Posted by YTSL at 11:59 PM