Kampai! For the Love of Sake and more at Sake Bar Ginn 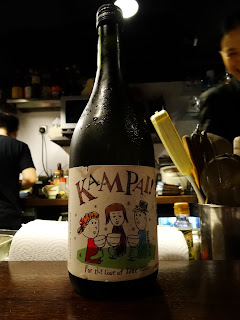 A bottle of sake which has the same name
as the documentary movie I viewed earlier today :) 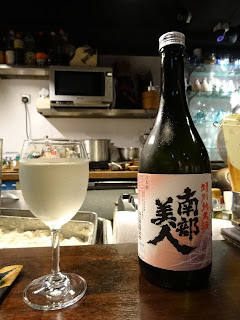 
Less than a year ago, I viewed my first documentary film about sake.  On a visit to my favorite sake bar in Hong Kong a few days later, I mentioned my having checked out The Birth of Sake to the proprietor; whereby she told me that they had some junmai daiginjo from the sake brewery which had been the focus of that particular documentary!


Although it remains officially an "off menu" item, that fine tasting Tedorigawa junmai daiginjo has become one of the sake I regularly order on my visits to Sake Bar Ginn.  So consider me pretty excited after I told its owner (who's a certified sake sommelier and "sake samurai") on a visit last week that I was going to see another sake documentary this afternoon -- this one entitled Kampai! For the Love of Sake -- and was told in turn that she had a special bottle of sake brewed as a tie-in to the making of that film, which she'd save some of it for me to drink after I had viewed that documentary offering!


As I also had told her, I figured that I would want to head straight over to drink some sake after viewing that sake documentary.  And so it proved!  I wonder how many others of the viewers at the screening had the same urge, and obeyed it...

In any case, I feel particularly privileged that not only did I get to try the Kampai! For the Love of Sake tie-in sake (which was a pretty tasty, multi-note affair) but I also got to drink a staple flavorful product of the Nambu Bijin (Southern Brewery) brewery whose fifth generation owner cum master brewer, Kosuke Koji, was one of the primary featured individuals in this commendable film that I think may get some of those unfamiliar about sake to want to try this  this Japanese drink as well those who love sake to enjoy and appreciate it all the more.  :)
Posted by YTSL at 11:59 PM