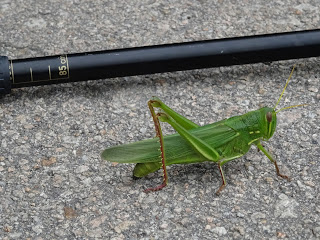 The largest grasshopper I've ever seen -- by
a long chalk! -- resting on Cape d'Aguilar Road 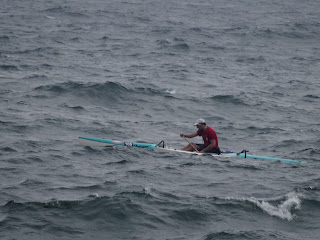 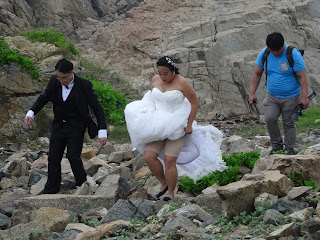 A couple and their photographer on their way
to the cape's rocky edge to take wedding photos ;)


After waiting several years before going and checking out the sights at Cape d'Aguilar, I definitely wasn't going to wait that long before returning to that picturesque part of Hong Kong Island.  With service seeming to have been suspended (or, at least, decreased) to the nearest bus station (over at the Cape d'Aguilar Road roundabout at Windy Gap) on Sundays, it took the three friends I went out hiking with today and I some time before we got to realizing that the bus stop marked as "Quarry" actually wasn't all that far away from it.  But once we found that out, our excursion could commence in earnest -- with a stroll along the section of Cape d'Aguilar Road on which buses normally go along but which was pretty much vehicle free this afternoon.

While I've passed that way on a bus several times before, things look as well as feel different when you're walking there -- and one is more able to notice such as a trail leading out from Windy Gap down in the direction of Shek O's main beach and this section of the Big Lychee's name being well deserved (so much so that I took off my baseball cap for fear that it'd be blown off and away!).  Still, it wasn't until we got on to the more secluded sections of the southeastern tip of Hong Kong Island that we got to seeing some truly interesting sights.

Among these was a green grasshopper that I don't think it'd be an exaggeration to estimate at being around 10 centimeters (~3.937 inches) long!  In all honesty, until I saw it with my own eyes, I hadn't realized that grasshoppers could grow that big, in Hong Kong or elsewhere in the world.  (And for the record: the measure visible on my hiking stick in the photo at the top of this blog entry is for 5 centimeters!)

But even while I did spot a number of other interesting critters this afternoon (including a couple of cool looking caterpillars and over 20 large spiders!) and the rock formations of Cape d'Aguilar -- and the waves that crash onto them -- continue to awe, the two other sights that may well have made the largest impression on me this afternoon were of humans doing the kind of things that I could never imagine myself ever being inclined to do.

First up was a solitary man in an outrigger canoe in the kind of churning gray waters whose waves looked like they would be a major challenge to row against, if not keep a small boat from capsizing.  And although that adventurous fellow looked like he knew what he was doing, I could imagine less capable individuals ending up not only way wetter than they would like but also quite a bit closer to the cape's pretty scary-looking rocky edge.

Then there was the couple dressed to the nines in formal wedding wear who had opted to have their wedding photos taken in this particular section of Hong Kong.  I'm already well aware that Hong Kong couples can be found having their wedding photos taken in seemingly unlikely spots (such as the water's edge of a beach or scenic but out of the way spots like High Island Reservoir and Nam Sang Wai) -- but this party's bride-to-be took things to another level by feeling obliged to protect her white dress by hitching it up way past the knee and thereby amusing my much more casually -- and appropriately (for the location) -- attired friends and I! ;D
Posted by YTSL at 11:42 PM

I returned to this blog a few times mostly because of your grasshopper photo, a sure sign it will endear itself to me as one of my favorite images in your insect archive. With its powerful-looking back legs, this grasshopper speaks to me of a dynamism contained in nature's creatures...In my mind's eye, I see this magnificent insect immortalized in the form of a sculptured jade replica, sitting proudly in a display case of the Palace Museum, Taipei.

I'm gratified that you feel certain of my blog posts are good enough to check out more than once. That grasshopper is really something, isn't it? And I see what you mean about your being able to imagine it immortalized as a jade sculpture that has pride of place at Taipei's Palace Museum -- even though, at the moment, pride of place looks to belong to a piece sculpture that looks like a slice of fatty pork! ;)