Succumbing to the siren call of the Japanese golden peach 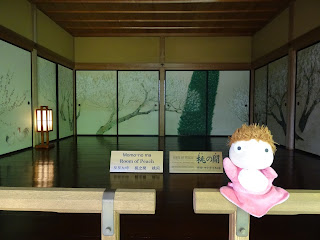 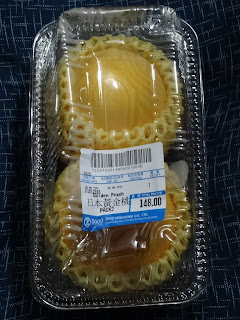 The priciest peaches I've ever seen,
paid for and eaten! ;O


How much would you pay for fruit?  I know people who'd pay a premium for excellent sushi, top notch steaks (and just about anything wagyu) and refined alcoholic beverages (such as the bottle of the Daishichi Sake Brewery's Myouka Rangoku which reportedly has a retail price of around HK$10,000 (~US$1,288) and I feel very privileged to have drank part of!) but would not consider doing so for any melon, peach or other fruit -- even highly valued ones from Yubari, Furano and other regions of Japan known for producing what in all probability are the best fruits in the world, and certainly the most expensive.


Maybe because I come from a part of the world whose most prized -- and priciest -- delicacy is a spiky fruit, I might be more susceptible than others to answer the siren call of certain fruits (and I don't (just) mean a certain lovable dancing and singing Pear either).  In any case, after recently reading about Japanese peaches that tasted like "the nectar of the gods", I decided that I really wanted to try this golden version of what is in fact one of my favorite fruits (alongside durian and mangos).


To be sure I'd get the good stuff, I went to the food hall of Sogo's Causeway Bay flagship store to get what turned out to be two golden peaches rather than just the one I had wanted to just try -- because it turns out that they're packaged that way.  More precisely, the golden peaches are not only wrapped in plastic but also are encased in the fruit version of cushioning to prevent bruising and such -- and they turn out to cost HK$148 (~US$19) for two, or HK$74 (~US$9.50) each!


Despite my having gone to Sogo this afternoon expressly to buy this particular Japanese fruit, I have to admit to baulking for a bit before deciding to bite the bullet and get by far the most expensive -- and, as it so happens, largest -- pair of peaches I've ever bought in my life.  But after going ahead and eating one of them earlier this evening, I can confirm that it is easily the most delicious peach I've ever tasted in my life: sweet, juicy and smacking of wholesome goodness!

While it's true enough that I won't be making a regular habit out of buying and eating these very precious fuzzy fruits, I totally can see myself getting them as presents for good friends on special occasions such as their birthdays.  At the same time though, those friends would have to be fellow foodies -- otherwise, they probably will not really appreciate the gesture, and the peachy fruits themselves! ;b
Posted by YTSL at 11:53 PM