The inconclusive talks, and the eye-opening interview given before them 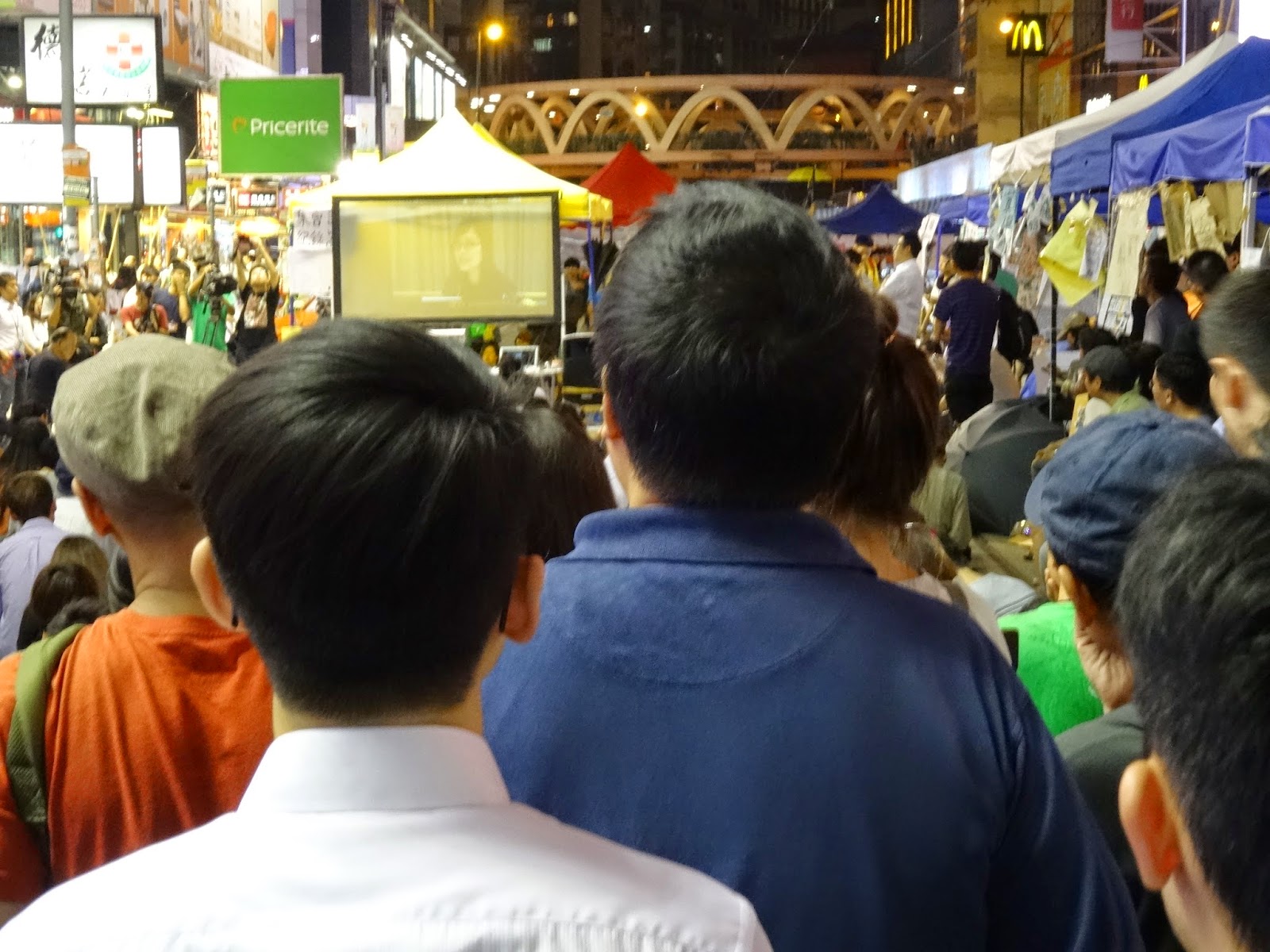 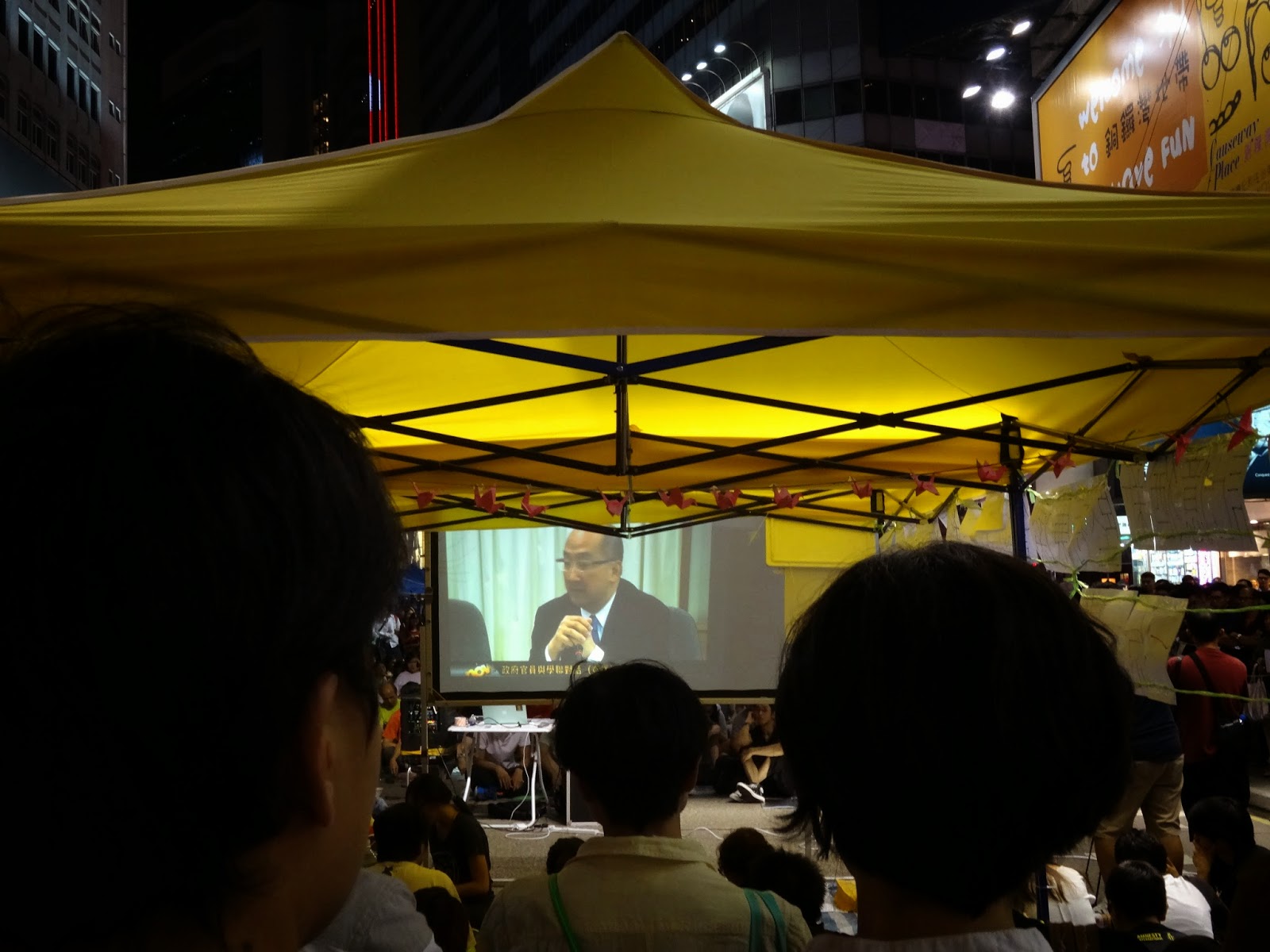 If only members of the government would come under the yellow
canopy in the flesh (Yes, you may say I'm a dreamer but...)

So the talks between the protesters and the authorities finally happened... and as widely expected, neither side looked able to convince the other of the validity of its views.  But on the bright side, they were talking -- not shouting at and haranguing the other.  And Hong Kongers got to see and hear that the Umbrella Revolution representatives aren't radical revolutionaries but, rather, overly idealistic students at worst.

Also, it may be empty words but it's still interesting that Chief Secretary Carrie Lam included the following statements in her concluding remarks:-

- The government is considering how to make a report to central government to reflect people’s views.

Still, far more illuminating to me -- and most definitely damning -- is 689's remarks ahead of the talks in an interview carried in The Wall Street Journal, the International New York Times and the Financial Times -- and reported by such as the South China Morning Post in the past 24 hours.  And while the International New York Times' article's headline read "Hong Kong Leader Reaffirms Unbending Stance on Elections", the South China Morning Post got closer to the crux of it with its headline of "CY Leung: 'Democracy would see poorer people dominate vote.'"

For those who missed it, here's the opening paragraph from the International New York Times piece: The Beijing-appointed leader of Hong Kong, Leung Chun-ying, said Monday evening that it was unacceptable to allow his successors to be chosen in open elections, in part because doing so would risk giving poorer residents a dominant voice in politics.

And here's more from the South China Morning Post's piece:-

...Leung said that if candidates were nominated by the public then the largest sector of society would likely dominate the electoral process.

...“If it’s entirely a numbers game and numeric representation, then obviously you’d be talking to the half of the people in Hong Kong who earn less than US$1,800 a month [HK$13,964.2],” Leung said in comments published by the WSJ, the FT and the INYT.

...Semi-autonomous Hong Kong has one of the biggest income divides in the world, with growing discontent at increased inequality and exorbitant property prices fuelling the protests which turned increasingly violent at the end of last week.

...Leung’s latest comments are likely to further fuel the anger of protesters who see him as hapless, out of touch and pandering to the whims of a small  number of tycoons who dominate the financial hub.

And this man is supposed to be a Communist?  Only under China's brand of Communism...
Posted by YTSL at 8:25 PM

CY Leung basically is a Communist with (PR)Chinese Characteristics...he, in fact, CY Leung's daugther needs to get out of their ivory tower and live on the streets of HK for a month under HK welfare (CSSA) including a month living at the public estates.

Totally agree with you that it'd do CY Leung and his daughter good to get out of their ivory tower and try living on the streets of Hong Kong and/or public estates. Am sure it will help them understand regular people more -- and may even make them more sympathetic when people air their grievances.

actually doubtful due to their "northern programming" about "may even make them more sympathetic" business, I just want these two to suffer..

Re CY Leung's daughter: he can't even control her, how can he expect/be expected to govern Hong Kong?