The police and the protest areas tonight 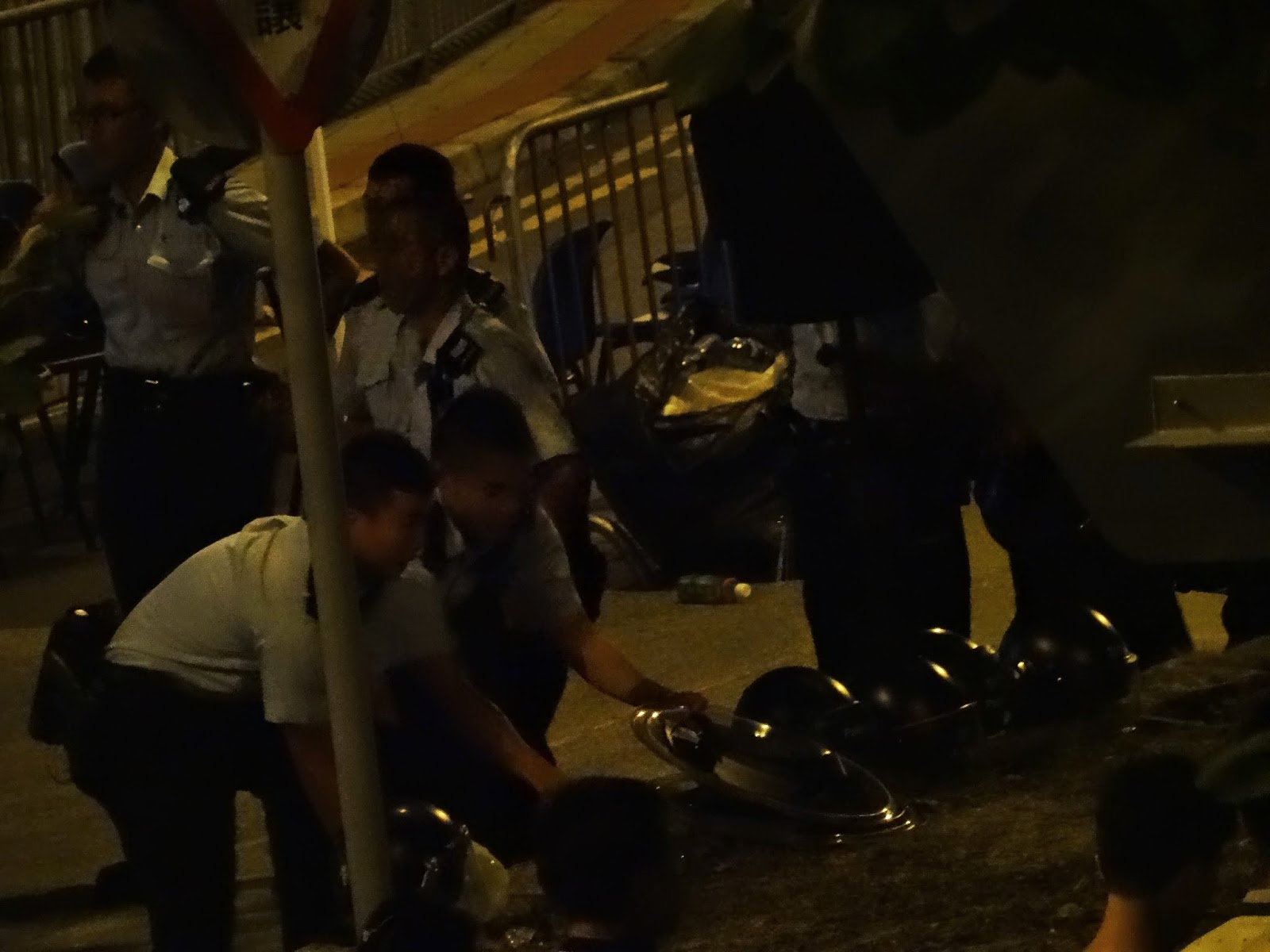 Close to the PLA Central (Hong Kong) Barracks, the police
openly lay out their gear for the public/protesters to see 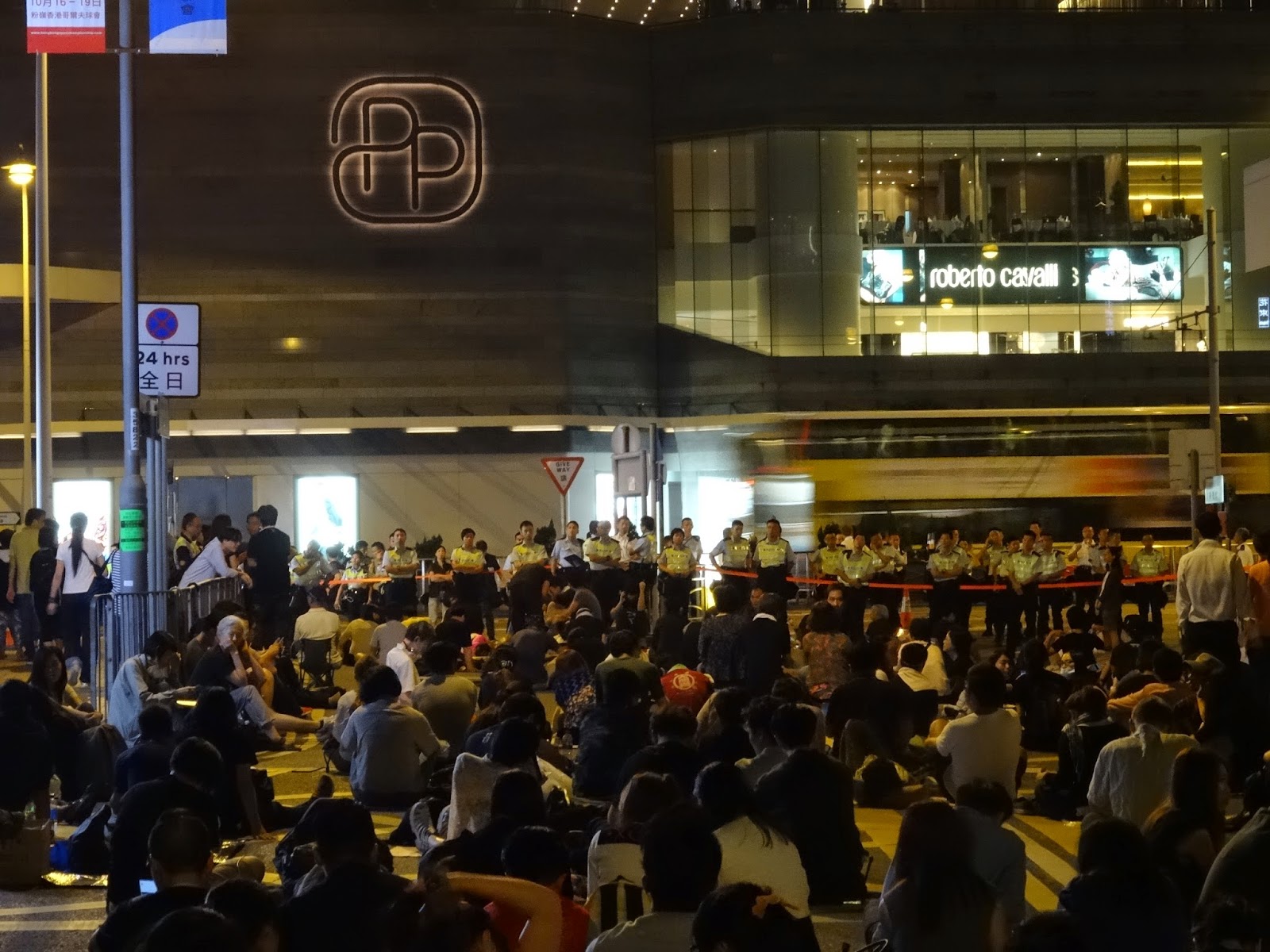 A police cordon stands between the protesters and
Queensway, which just last night was still "occupied" 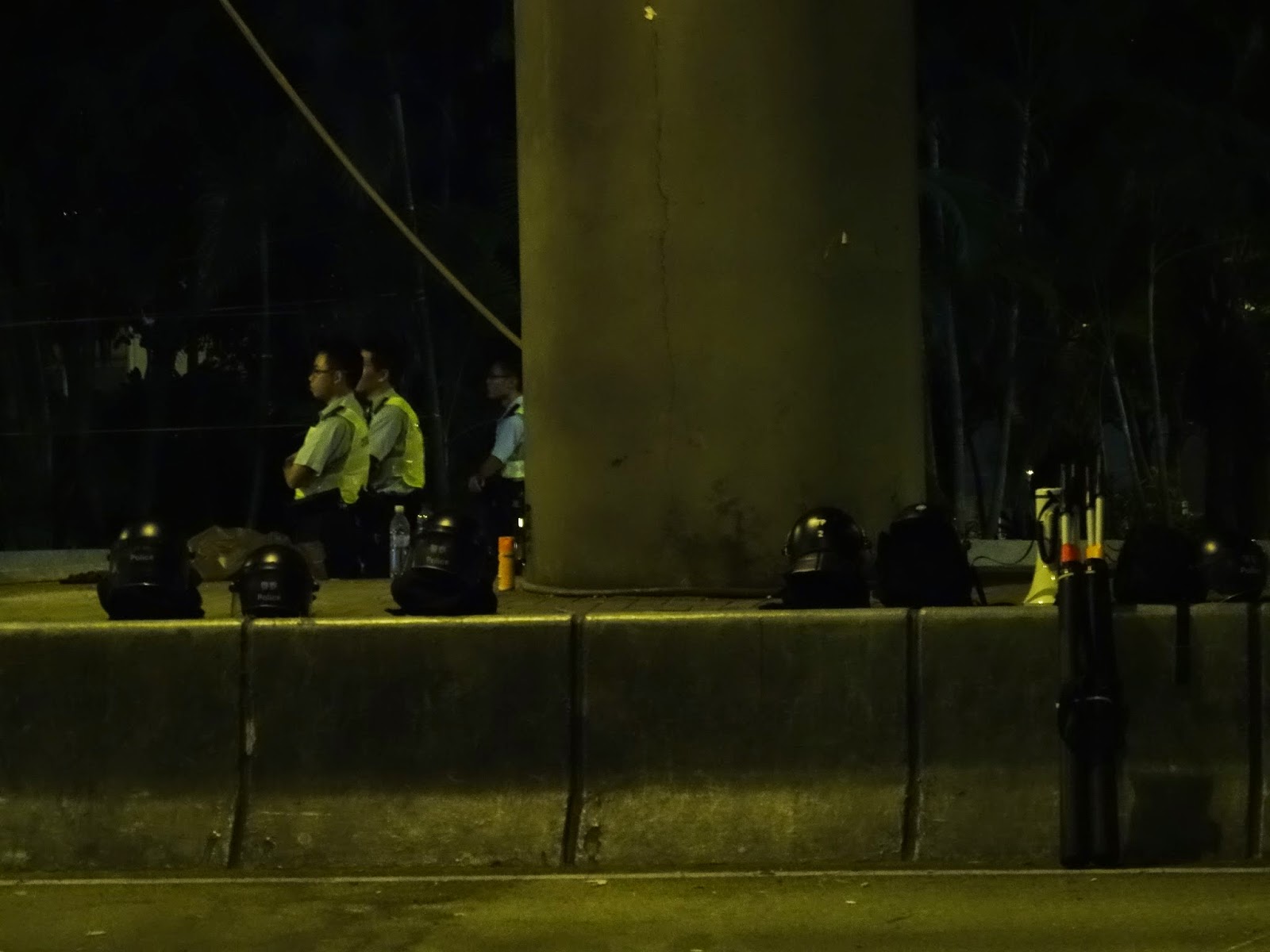 Police, with their gear nearby, on guard near the
Police Headquarters at Wan Chai 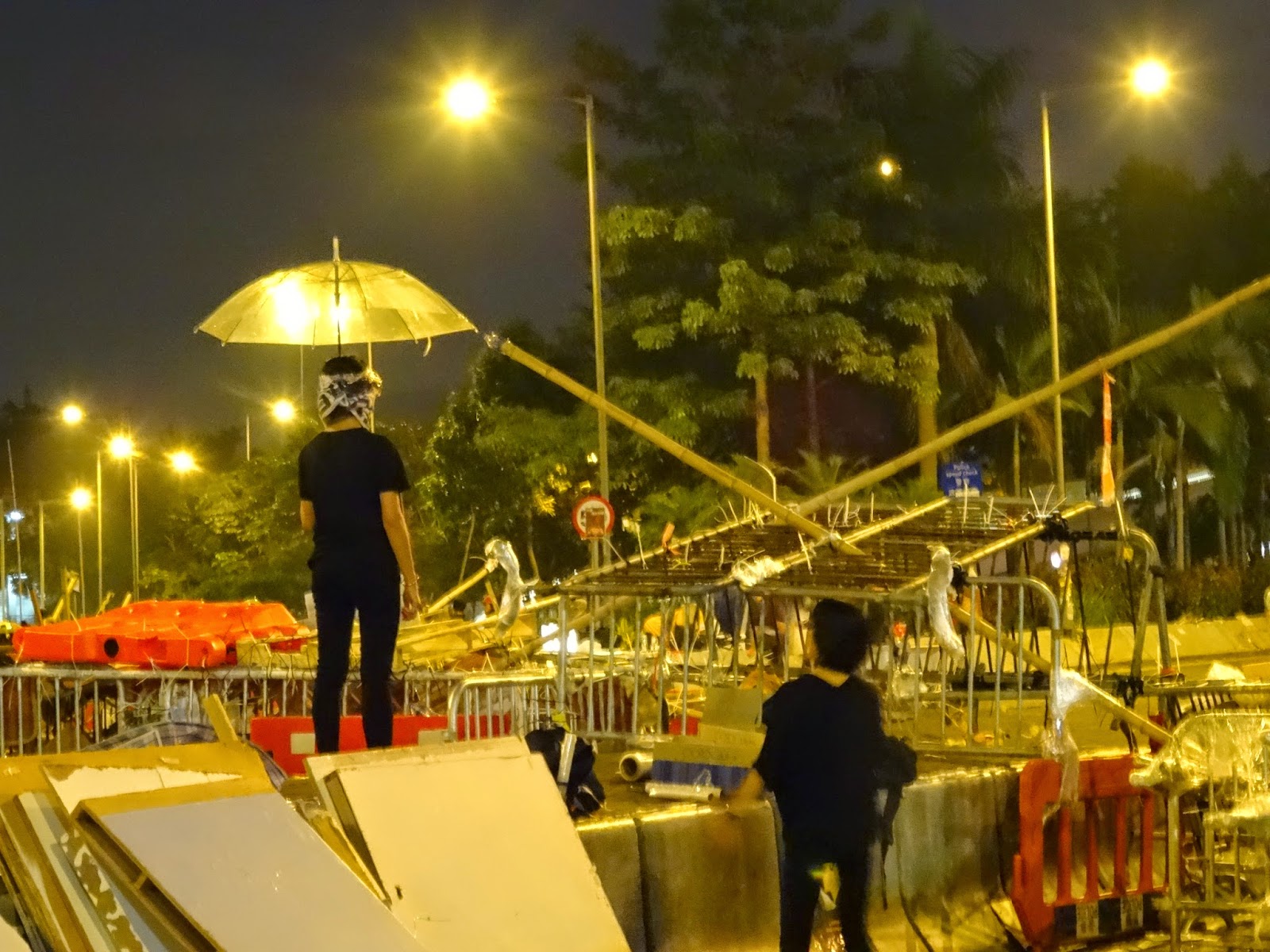 A protester acts defiant -- but seconds later, is asked by
another protestor to be less confrontational

It's after midnight as I write this, and I'm dog-tired -- not least because after dinner in Central this evening, I decided to walk from Central to Wan Chai, being unable to resist heading to the protest areas to see for myself what's it like tonight.

In brief: the size of the protest area at Admiralty has contracted -- with Queensway now being open to traffic as well as the road in front of the Mandarin Oriental Hotel, etc.  And I expect the area to contract some more in the next day or so, with Gloucester Road perhaps being the next "take back" target of the police.

But trust me when I tell you that there are a significant amount of protesters out there still -- and this despite reports of the police having resorted once more to using pepper spray and even batons against them this evening.

At one point this evening I myself witnessed a hairy moment -- whereby a team of police equipped with Darth Vader-like helmets marched into the vicinity...but then laid out their weapons for people to see rather than actually make use of them.  Soon after, a bunch of plainclothes cops, to shouts of "CID", came running into the area.  In response, the protesters went on alert, with many slipping masks onto their faces and some goggles too.


The atmosphere tonight is definitely not as laidback as it was last night, and a friend who I met there told me that a scheduled outdoor film screening (of South Korean drama The Attorney) had been cancelled due to the tense situation this evening.  Even though some would deny it, there's also a sense that the end is nigh.

But many of these people are not going quiet into the night, without a fight -- and also one last hurrah at least.  And don't bet against them returning in force when the situation allows it, as the anger and indignation sure has not died down --  and may well have built with each passing day.
Posted by YTSL at 12:47 AM

Thanks for your pictures and description. I love your hiking posts - reminds me of my youth in HK. But it is the present that needs to be attended to. Please keep safe.

Too late, police beating protesters after being arrested in at least couple scenarios (one caught on TVB video)

I urged everyone worldwide to pass the world to their various gov't representatives (including multinationals and mutual funds) to persuade them to pull foreign investment from China if the CCP doesn't change their minds with re: to Police Beatings of Ken Tsang AFTER he is arrested and handcuffed.

I also urged those working in HK to get out into the streets and join the protest, just like the social workers and dock workers. I also urge everyone in HK to STOP PATRON ANY BUSINESS OF REAL ESTATE TYCOONs/BILLIONAIRES.

What does it take for everyone in HK to do something, maybe a repeat of 1989, or police using live bullets?

Thanks for following my blogging and for your continued interest/love in Hong Kong.

Some people may not be aware of the police assault and video you're referring to. So I'm going to refer them to this:-
https://www.youtube.com/watch?v=LvsrEF3gp-U

Re your urgings: it's very difficult to get people to do this because so much in Hong Kong is owned by the tycoons and billionaires.

And yes, that's the serious irony of this situation laid bare -- that the officially communist government of China and capitalist Hong Kong tycoons have had a hand in creating this sad state of affairs. If only Beijing and the Hong Kong authorities were more understanding of and caring for regular people!

@YTSL, true everything is owned by the tycoons. However, CCP easily could pressure the tycoons given their exposure in the mainland.

I urged people to write to everyone they know, even the UN, to multinationals (at the worldwide HQ).

Personally, I will avoid purchase of anything made in China. I will avoid patron any company or utilize any services that are owned by PRC Chinese or share pro-Beijing views.

People in HK don't have to patron places owned by the tycoons.

a lot of people have MPF accounts, move away from companies that are owned by the billionaire tycoons and PRC China based (ie ManuLife is owned by the Richard or Victor Li)

Unless everyone is HK becoming more like sheep and flat slaves.

Absolutely that the CCP easily could pressure the tycoons. So if the party really cares for people rather than its' own welfare...

But, again, I don't think wholesale boycotts of things Chinese is the way to go -- because it is difficult to implement AND it could so easily spiral into racism.

Decades ago, when the anti-apartheid movement was urging boycotts against South African businesses, I also recall having discussions with Southern African friends (from Zimbabwe and Lesotho) about this. Their opinion/suggestion was one should target the big businesses that invested in South Africa while still doing such as buying fruit from there -- because with the latter, if one stopped doing so, the one that'd suffer the most economically were those picking the fruit, etc.

In the case of Hong Kong, I do try to patronise the smaller stores, etc. And most definitely try not to encourage those shops that look to have popped up primarily to serve mainland shoppers!