Thoughts on the protest area at Causeway Bay 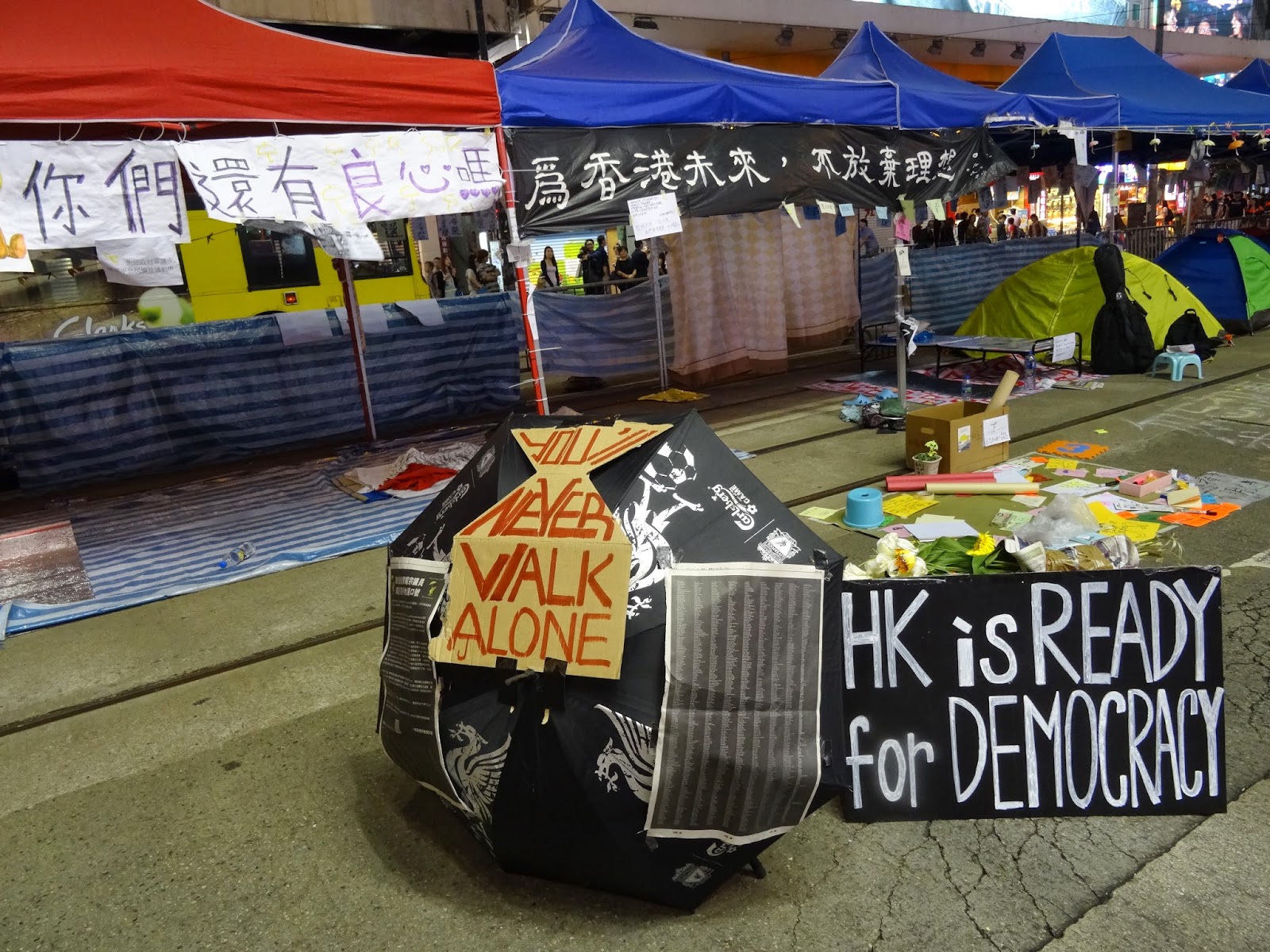 Spotted at Causeway Bay this evening 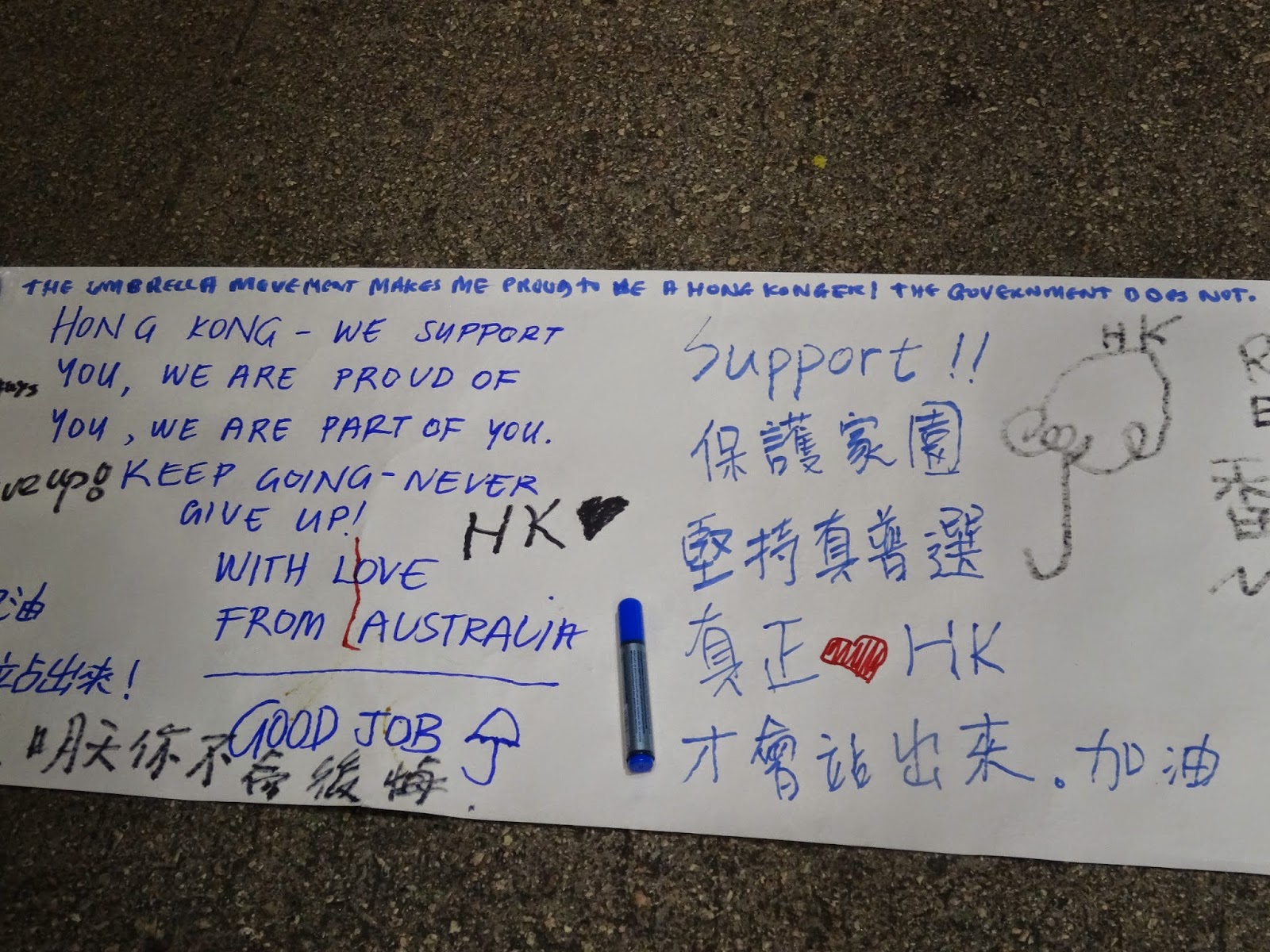 After I wrote one of the messages in the above picture,
an old guy nearby gave me a thumbs up! ;b

If this were a normal Saturday evening, I'd currently be watching on TV my favorite association football team battling an opponent thousands of miles away.  But because these are unusual times in Hong Kong, I am instead blogging once more about a protest movement that, as recently as the afternoon of September 28, many people were doubting would survive into the next day -- and happily putting up a photo in which the "You'll Never Walk Alone" phrase which I hitherto have associated with an opposing football team is prominently displayed.

For the record: yes, I was in Admiralty once again this afternoon with a number of other people (at least 1,000 -- maybe over 2,000 at any one time?) -- and after dinner this evening, went and checked out the much shrunken Causeway Bay protest area that, in all honesty, I had expected to disappear before Mongkok's, not least because when the police moved in to remove some barriers and open up some roads in Causeway Bay, they did not meet with much resistance at all.

If truth be told, I got to feeling sometime last week that Causeway Bay was in danger of being a freak show and protesting akin to enacting performance art -- since it often felt there that tourists, casual onlookers and people posing for photos far outnumbered the Umbrella Movement participants.  Consequently, I found myself feeling more comfortable -- and inspired -- at the Occupy Admiralty area and began spending more time there rather than the area that's two MTR stops east of it.

At the same time, I felt and saw more "anti Occupy" dissent in Causeway Bay -- be it in the form of "anti" people yelling at protesters or rude and/or just plain pathetic messages written there (and then put up in the protest area itself!).  Re the latter: last week, I saw a sign purportedly written by a kid complaining that the Umbrella Movement protests had made it so that he no longer was unable to go to Central.  Unable to help myself, I scrawled a retort to "Take the MTR" on it!

This evening though, the mood was calm, and even positive and encouraging with a couple of speaker's "corners" having popped up and the speakers being listened to attentively and applauded when they finished saying what they wanted to.  And while there were some policemen milling about, they didn't appear aggressive -- and I would even believe that a few of them were actually listening to what some of the protesters had to say in a way that seemed unexpectedly open.

Seeing this got me thinking that the continued existence of the Causeway Bay protest area may indeed serve its particular purpose -- in that it may well be the space which doubters, who would not venture into Admiralty (because it's too strongly "enemy territory" for them) or Mongkok (because the atmosphere there is too intense and/or "grassroots"), can go to actually see and hear things for themselves and, at some point, maybe get "converted" to the cause.
Posted by YTSL at 11:56 PM