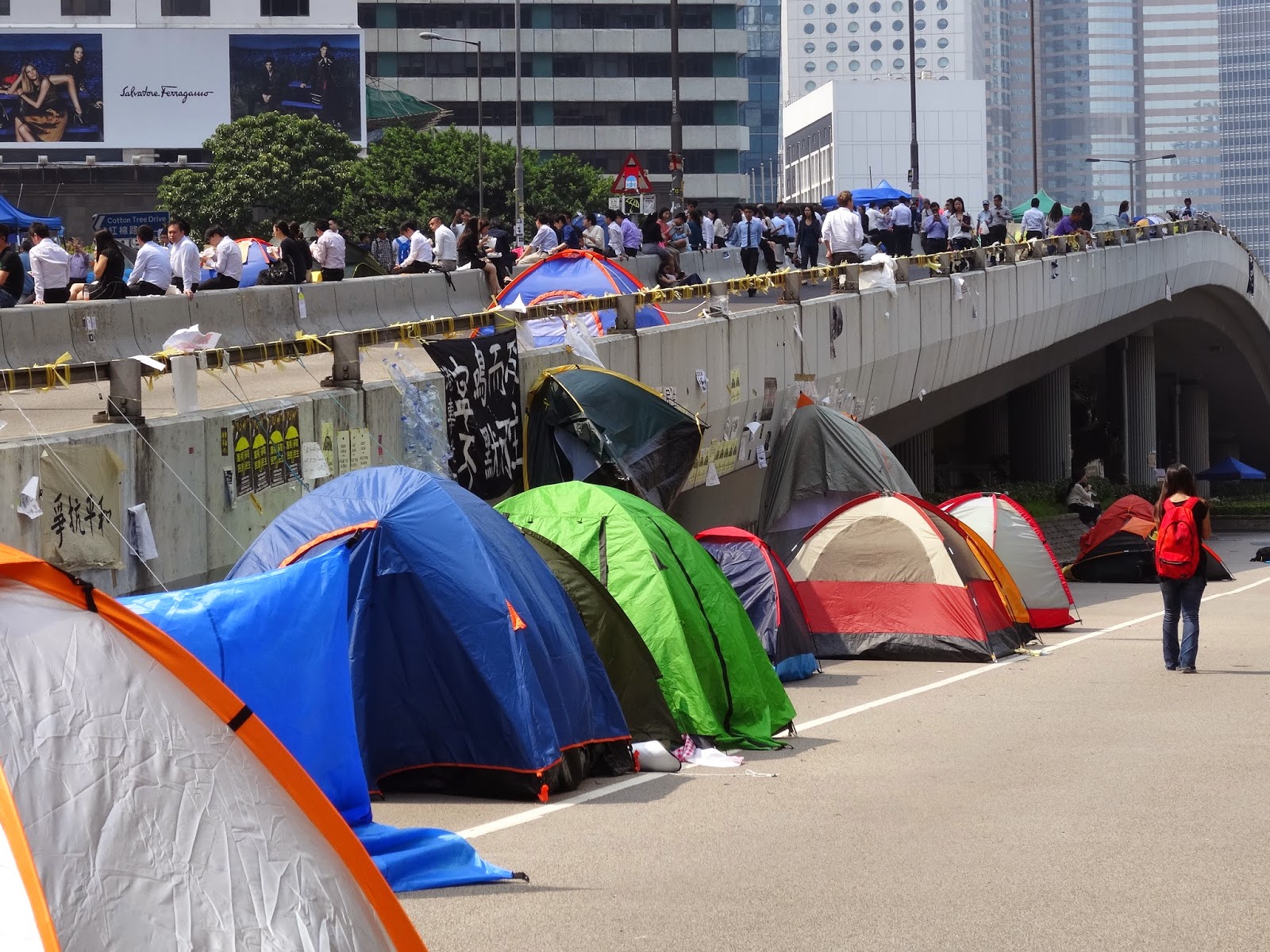 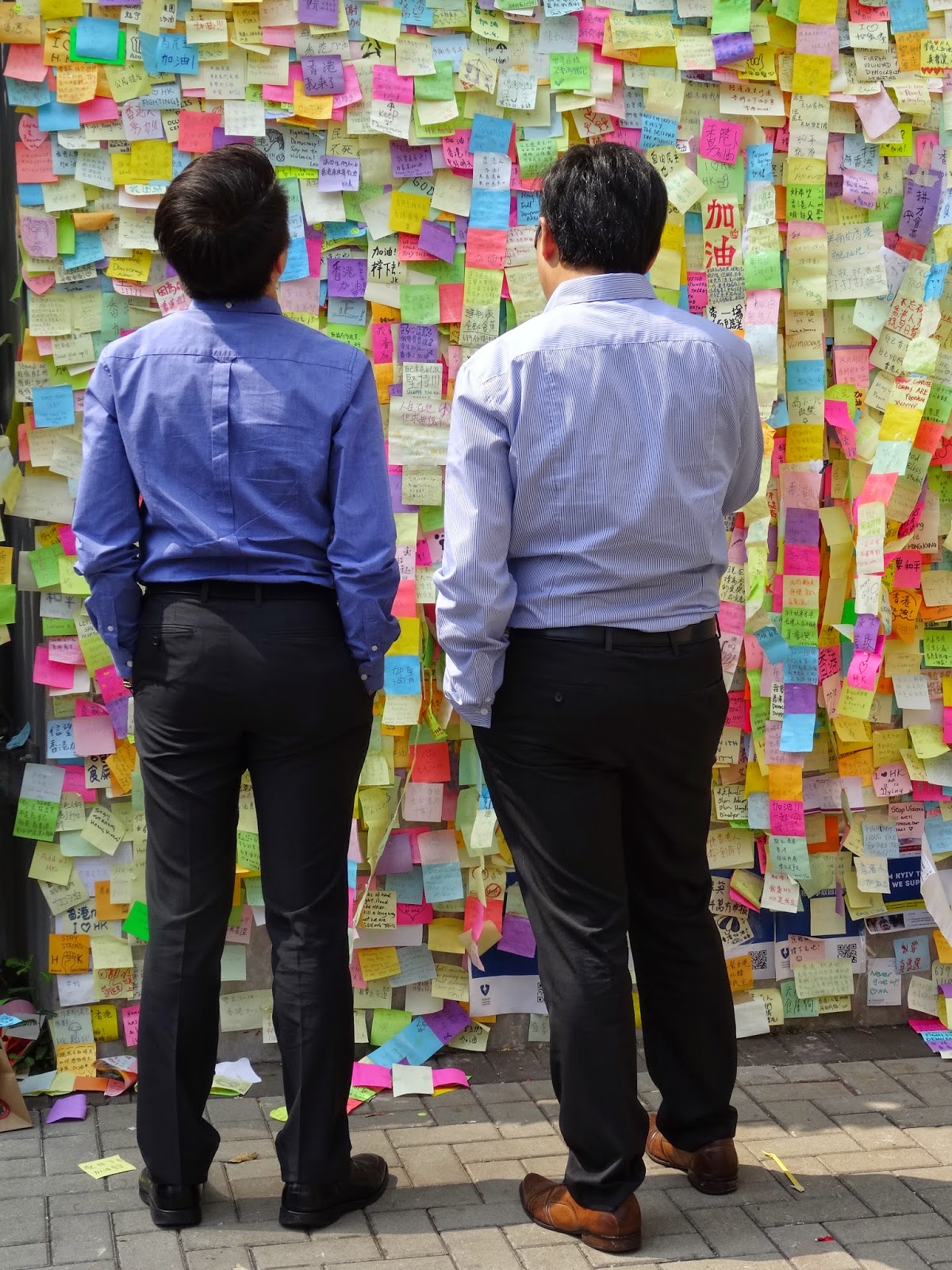 When in the area, it's hard to resist the urge to go
check out the messages on Hong Kong's Lennon Wall 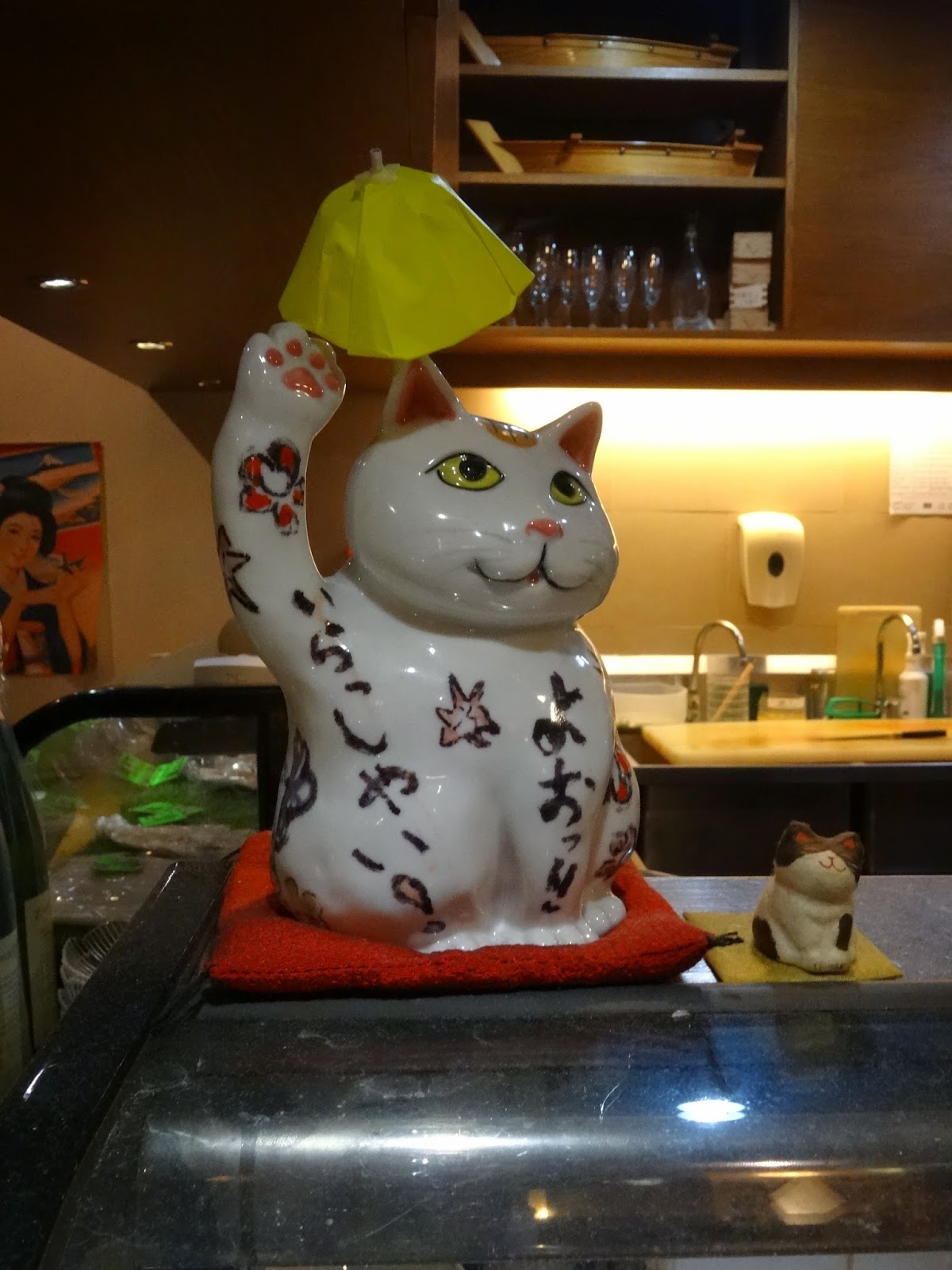 Spotted at a Causeway Bay restaurant this evening

First, some updates: The seven policemen caught on video beating up a protester whose hands were tied have been suspended from duty.  Also, at a news conference this afternoon, Leung Chun Ying said he was open to holding talks with the students -- but with restrictions that make it sound like not much good will come out of them -- and again showed himself to be so deaf -- or, at least, have a tin ear -- to public opinion that his removal from office surely would immediately improve the chances of a more successful dialogue between the protesters and the authorities!
Now for some perspective: from recent emails that I've received from friends living outside of Hong Kong, the Big Lychee sounds like a super scary place to be in at the moment.  But the truth of the matter is that I continue to generally feel far safer here than in many parts of the world.

For one thing, despite so many police having been deployed to the protest areas, Hong Kong appears as free of crime these past few weeks as it usually is.  Secondly, life continues to go on as usual -- including in a law-abiding way -- in much of the Big Lychee.  Put another way: people may be upset with the police right now but that hasn't incited them to do such as loot, pillage, destroy... or even jaywalk more than usual (i.e., not much at all!).

Actually, I've thus far not heard of a single shop window broken or store looted by protesters -- or petty crimes such as pickpocketing having taken place in the often crowded protest areas where, furthermore, I've not seen a single person drinking alcohol and taking drugs, and only have seen or smelt a very small number of people smoking cigarettes.  Indeed about the only illegal acts that has significantly risen in numbers in the past two and half weeks involves acts of civil disobedience like sitting or lying on the roads!

And while it sure did feel pretty tense when I was in the "occupied" areas of Admiralty late Tuesday night and somewhat so also there Monday evening, the mood was pretty mellow at the same site at lunchtime today -- with the scene being one in which camped out protesters and office workers on their lunch hour, hung out in the space with the odd tourist or five. (Re the last group: I have to admit I'm not sure what to make of them, especially those from mainland China, but I do try to think positively that maybe they'll actually learn something while visiting the area.)

And on the subject of false conceptions or misperceptions: not every business in Causeway Bay or other sections of Hong Kong that continue to possess "occupied" space is against the Umbrella Movement.  While it's true that I've heard dissenting voices, I've also seen signs of support -- such as the yellow umbrella on the maneki neko (fortune cat) at one of the restaurants in Causeway Bay that I like to go to! :)
Posted by YTSL at 11:31 PM

I am afraid HK is done unless its citizens willing to risk their lives to gain independence from China. Then again, most citizens only cares about making money and becoming flat slaves...

The impression I'm increasingly getting is that your agenda is not that of the Umbrella Movement's. Also, that your estimation of Hong Kongers and love of Hong Kong is actually on the low side.

I absolutely do not believe that most Hong Kongers only care about making money. However, it also is true that many of them do prize socio-political stability very much and it's a matter of them viewing the Umbrella Movement as disrupting it or showing why things already are bad enough that people do feel compelled to protest.

Re Mongkok: I'm sure you've already heard that the protest site there is now gone.

In its memory, I'm offering up the following link:-
https://paste.plurk.com/show/qlvkyb2jR1KQ5KbpCK7e/

So great to have the cat with the yellow umbrella!

It was cool to see -- and made me happy to realize that not all restaurant and shop owners think only in terms of whether their bread is buttered! ;)