Mongkok these past weeks and Admiralty earlier tonight 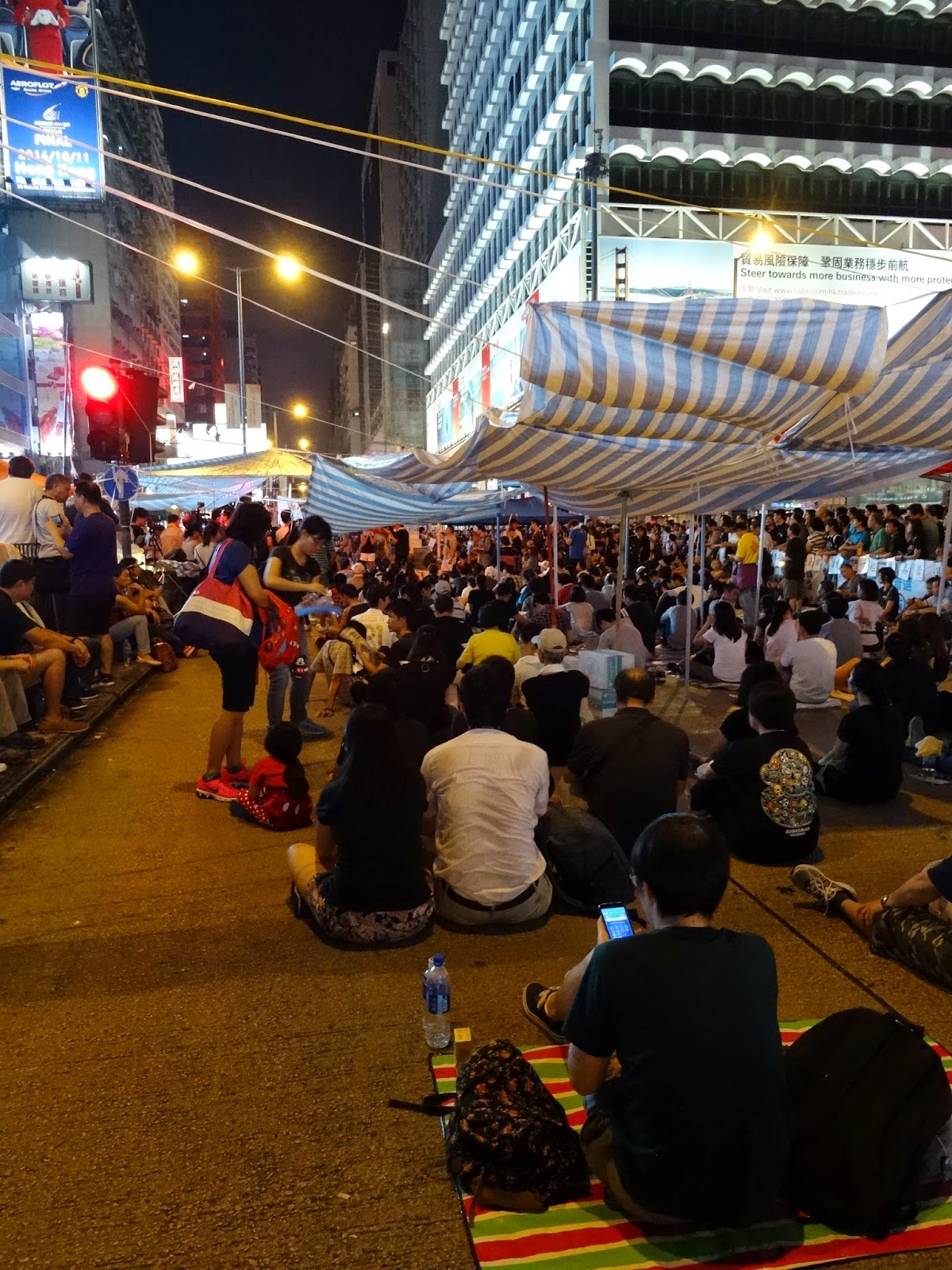 Occupy Mongkok on the evening of October 1 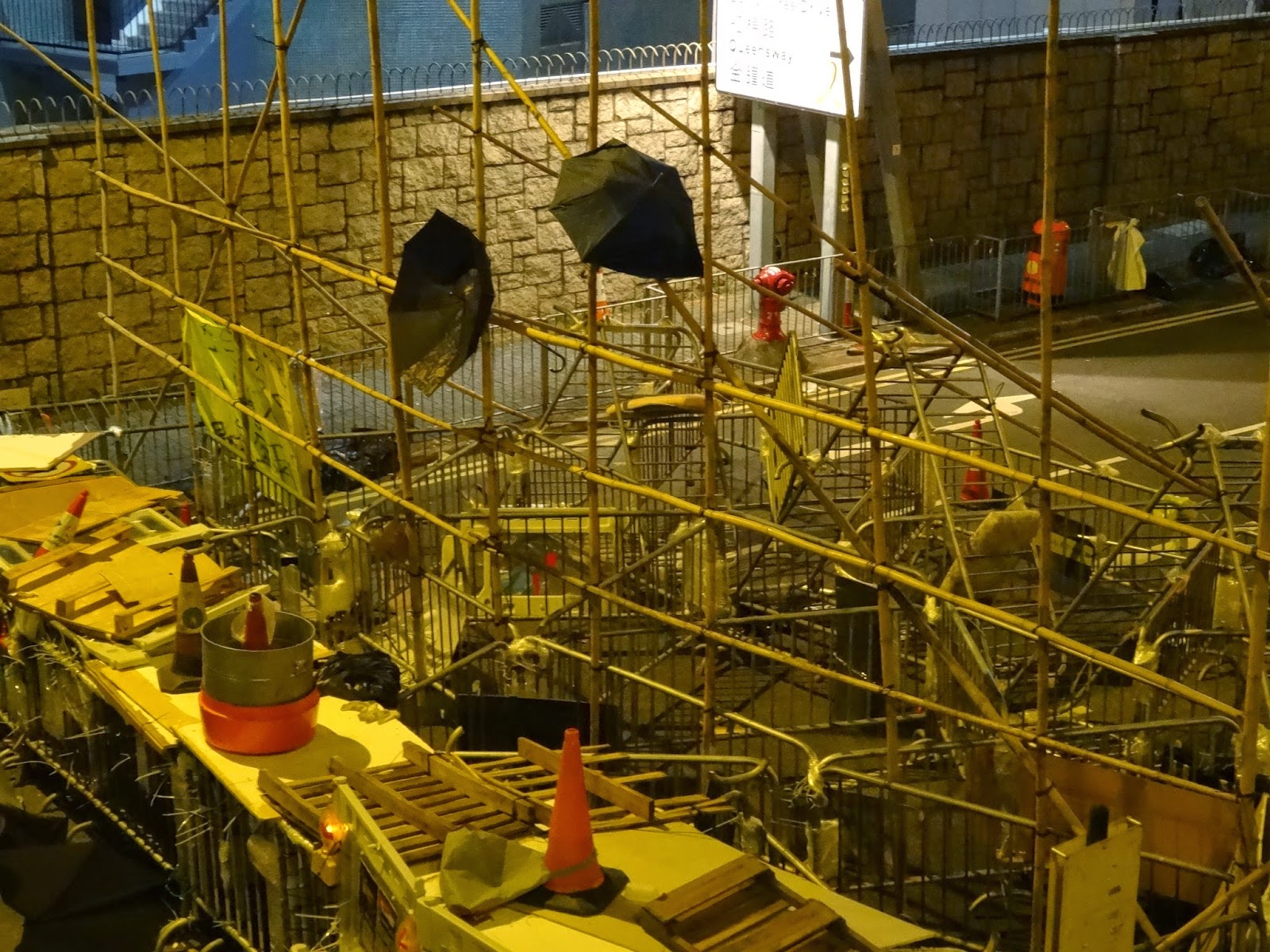 Earlier this week, a friend of mine disclosed that it would be his birthday this Friday and that he hoped to celebrate by sharing his birthday cake with Umbrella Movement members at Occupy Mongkok.  But Mongkok doesn't sound like a good place for happy moments today -- since this morning, there were reports of the police having cleared the protest site in that area and this evening, while I was out in Admiralty with three other friends, I was told by another friend that there were clashes in Mongkok between the police and protesters who were trying to reclaim the space occupied since September 28 by members of the Umbrella Movement.

I have friends who have played a part in the Umbrella Movement over in Mongkok (and at least four who demonstrated their support by spending nights sleeping on the streets there) but I only ventured out there once myself -- on the evening of October 1.  Even with one visit though, I noticed how the mood there was different from those of the other protest areas -- with it feeling by far the most intense of the four I visited that day.

Some time back, I came across an interesting piece on the Mongkok protest area and the people to be found there which made very good points about the important to the Umbrella Movement of this area and, also, the different vibe felt there vis a vis Admiralty and Causeway Bay.  And it was a bit surreal -- and hard to believe even -- that thousands of people could be protesting in a fairly relaxed fashion in Admiralty (and presumably also Causeway Bay too) this evening while Mongkok saw clashes that included the police once again using pepper spray and batons against protesters.

In truth, I also was surprised by the mellow mood of much of the large crowd at Admiralty this evening because of predictions made by a fair few that the police would be moving on to clear the protest sites on Hong Kong Island once Kowloon was completely cleared of Umbrella Movement protest sites.

Was it fatalism or a determination to enjoy one last happy hurrah before the movement's inevitable conclusion?  All I know is that the same civility and good manners that has characterised the Umbrella Movement for me continued to prevail in Admiralty tonight -- and ditto re the generosity that was exemplified tonight by several people (including one large extended family that looked to include grandparents and their grandchildren) going up to offer food to others as part of their support for this protest movement and its participants.
Posted by YTSL at 11:59 PM

Haven't seen any recent hiking excursions on your blog, which is understandable considering what is happening on the streets.

For the last few days CNN Intl news has been broadcasting live footage, in cinema verite style, from Mongkok. The cameras don't lie, these are violent protests which are provoking the police. This kind of urban guerilla warfare always leads to violence and doesn't solve anything.

Democracy is a loosely used word these days, but I'm not convinced it truly exists anywhere. Hong Kong never was a democracy, and certainly not under the British. Here in the USA what you have is a plutocracy, a rulership by the corporate and banking elite, who control everything from the candidates you vote for and anything else you can name.

In Hong Kong, even if they did elect a CE in a free election, would that solve HK's problems? I don't think so because it is the authority of the business elite that hasn't been challenged...The protestors should have initially centered their attention on the greedy property developers (tycoons, who have never considered the lives of people they have displaced) by actually demonstrating at their specific properties..I think more members of the working class would have sympathized with their cause and joined their numbers...Instead, they centered their protests on the central government. The Chinese mainland has a tradition of autocratic paternalism and nobody realistically expects that to change.

Hopefully, the more civilized protestors in Central and the perturbed anti-occupy people who want life to return to normal, will reach a compromise and maybe even a leader(s) will emerge to guide this great city through this dark period.

I don't tune in to CNN unless I'm in a hotel room with that channel. I'm not sure if cameras don't lie -- but know for sure that editing can make things seem more dramatic/exciting than things are.

Re Hong Kong and politics: part of the problem of the less than free election system is that it's heavily weighed towards the tycoons.

Also, protests centered on the central government? Sorry, but I so disagree with that opinion. Honestly, if you were to look around in the protest areas at the signs, etc. on display there, when there's ire, it's targeted primarily at Leung Chun Ying and other Hong Kong politicians -- and, yes, the police.

Check out this video:-
https://www.youtube.com/watch?v=UwizGVTmMhQ

Hopefully it'll give you a different perspective from what you've been getting from CNN.

As someone who has spent several nights and many days in Mong Kok, I can assure you that CNN is not presenting a realistic picture. The camera may not lie, but it doesn't always tell the truth either.

These protests are not violent, though there has been violence, initiated by the police and opposition. The police are inappropriately using potentially fatal force (striking at the head with batons) and have been subject to nothing more than umbrellas, which, contrary to government narrative, have not been used as offensive weapons.

The protesters are anything but urban guerrillas, and the only provoking has been done by the police and/or anti-Occupy agitators. I have personally observed this many times.

There has been illegal occupation and civil disobedience on the party of the protesters. However, they have not broken a single window, stolen a single thing, or damaged (much less destroyed( any public property. They clean the protest areas daily and have been recycling their rubbish.

I have spent, all told, at least two weeks observing these protests first hand. I slept on the streets several times including last night. Please believe me when I tell you these are not violent protests peopled by urban guerrillas. Thank you.

Thanks for adding to the dialogue.

Actually, "Anonymous" is not anonymous to me (as he emailed me to tell him who he is) -- and I know he was in Mongkok many nights and days, including from photos I've seen of as well as that were taken by him.

And yes, I'll put more stock by what he says than what you saw on CNN.

In case you return to these pages to read this, I just wanted to say thank you for taking the time to give me a more complete picture of what has been happening in Mongkok.