Since September 28, the day I returned from my wonderful Japanese vacation which I still have yet to blog about, I've not only been preoccupied by what I now come to think of as the Umbrella Movement but have heard of family members arguing and friends quarrelling about -- and some "unfriending" one another over -- the protests.

For many of us who have been to the protest areas: we are inclined to think "if only more people were more willing and less afraid to go and see what's out there for themselves..."  Then, we firmly believe, people would not only better understand the situation but also be more sympathetic towards -- and even inspired by -- what the Umbrella Movement's members are doing (or at least trying to do).

For those who have been relying only on the reports of -- and views given by -- others, here's adding my own.  One reader commented in a previous blog entry that "cameras don't lie".  I'll say that mine may be particularly truthful since I never do such as Photoshop my photos! 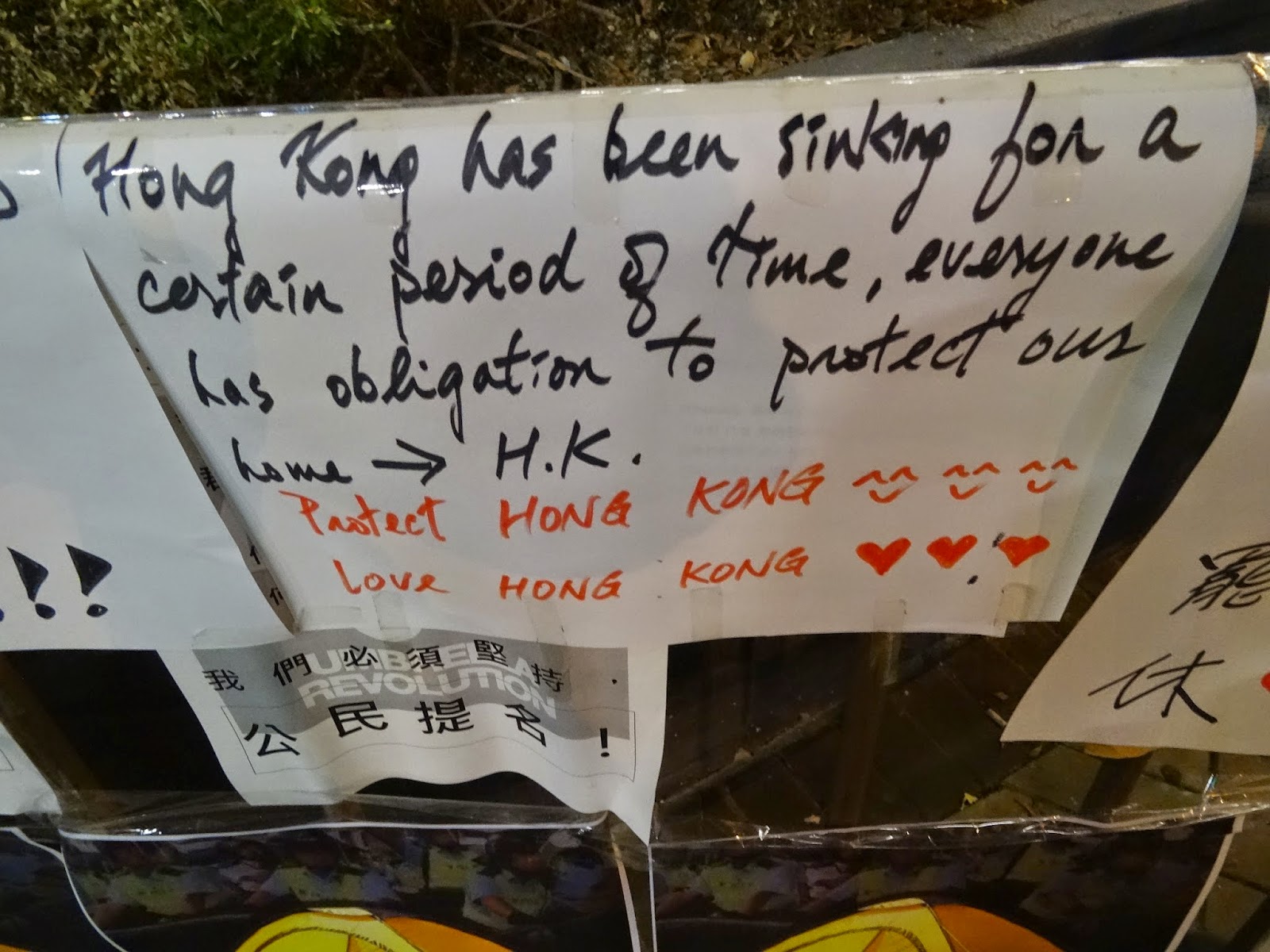 Spotted at Admiralty this past Monday 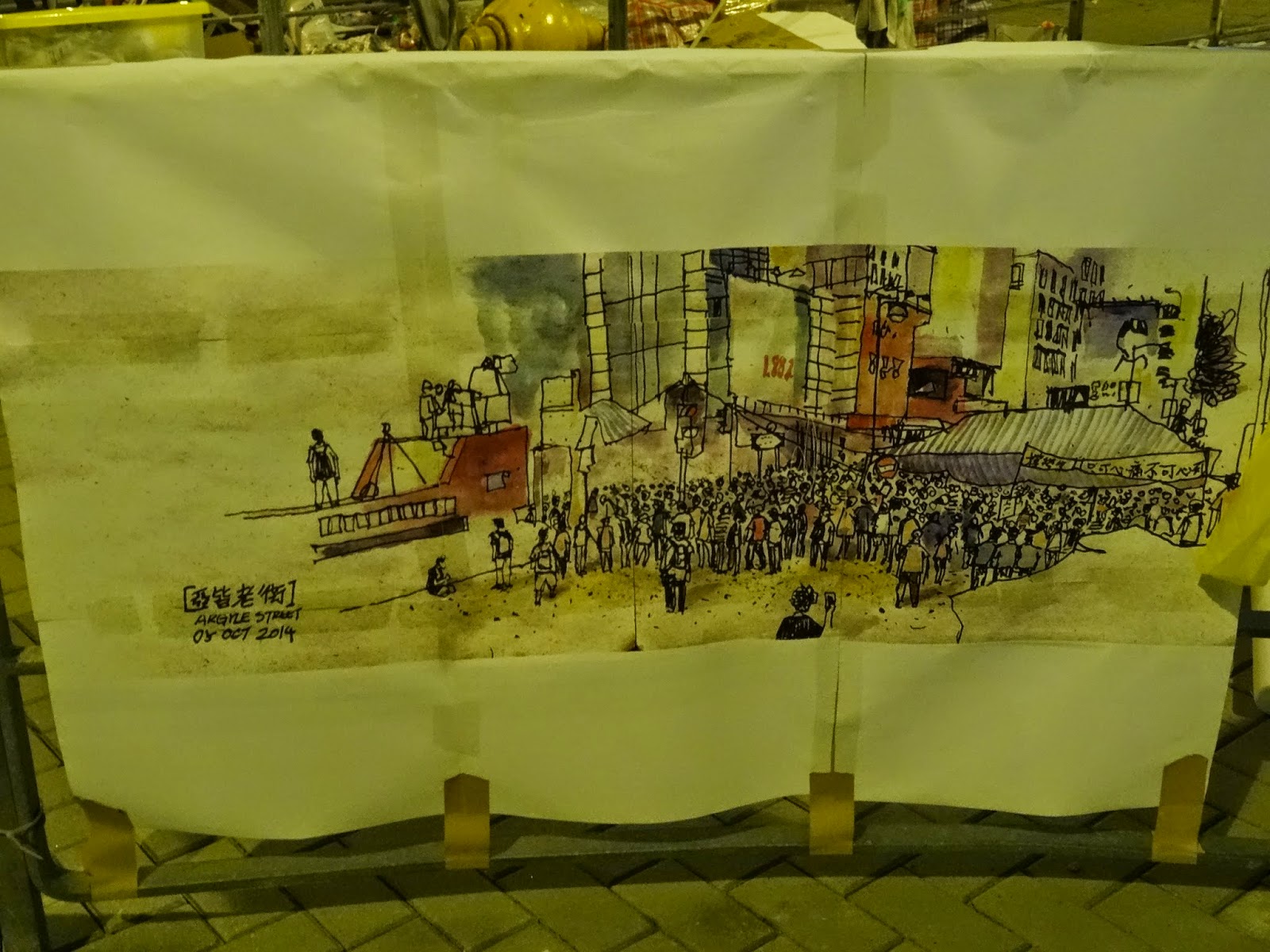 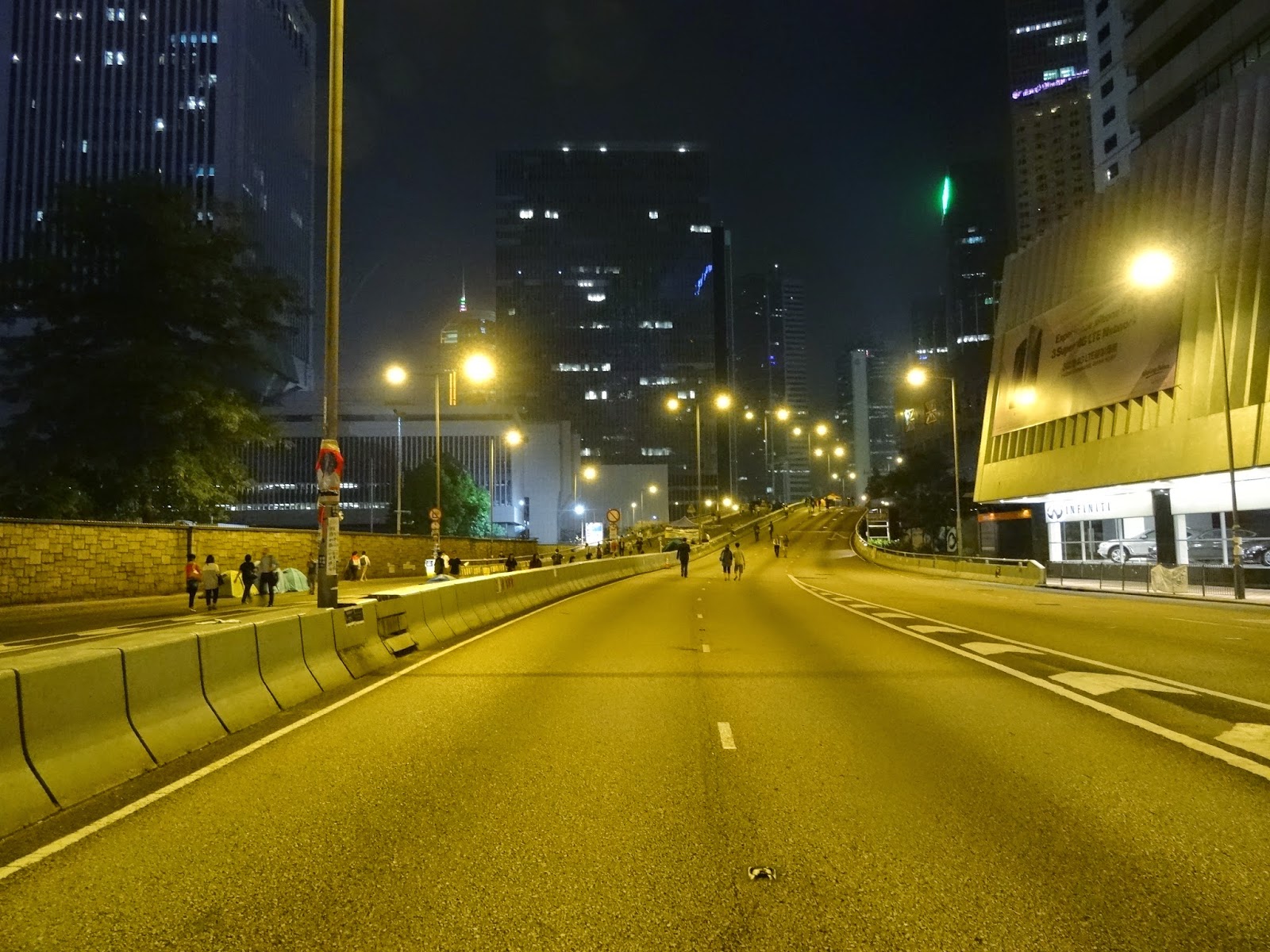 The scene in Central late Tuesday evening
(which, yes, was quieter than in nearby Admiralty) 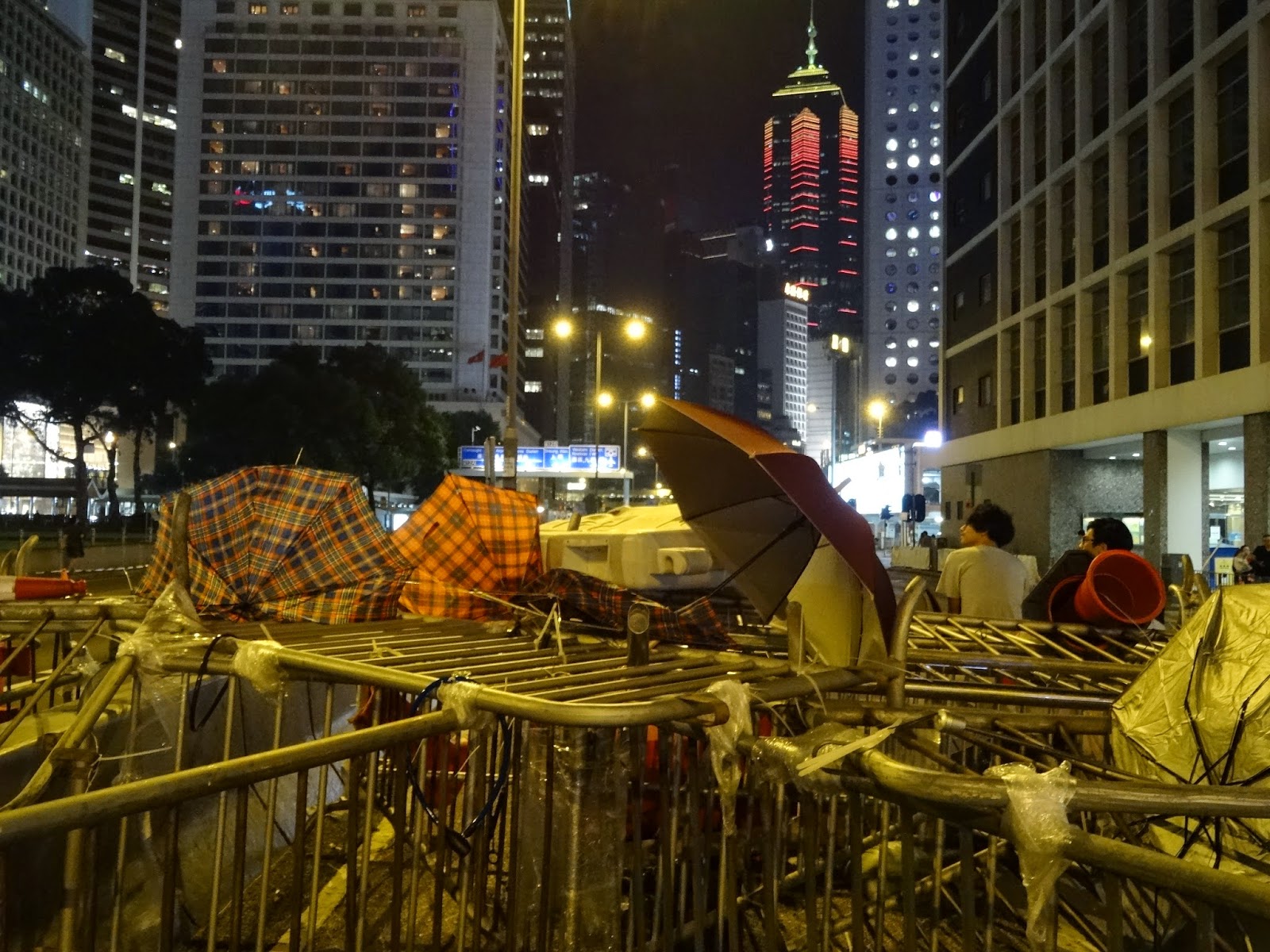 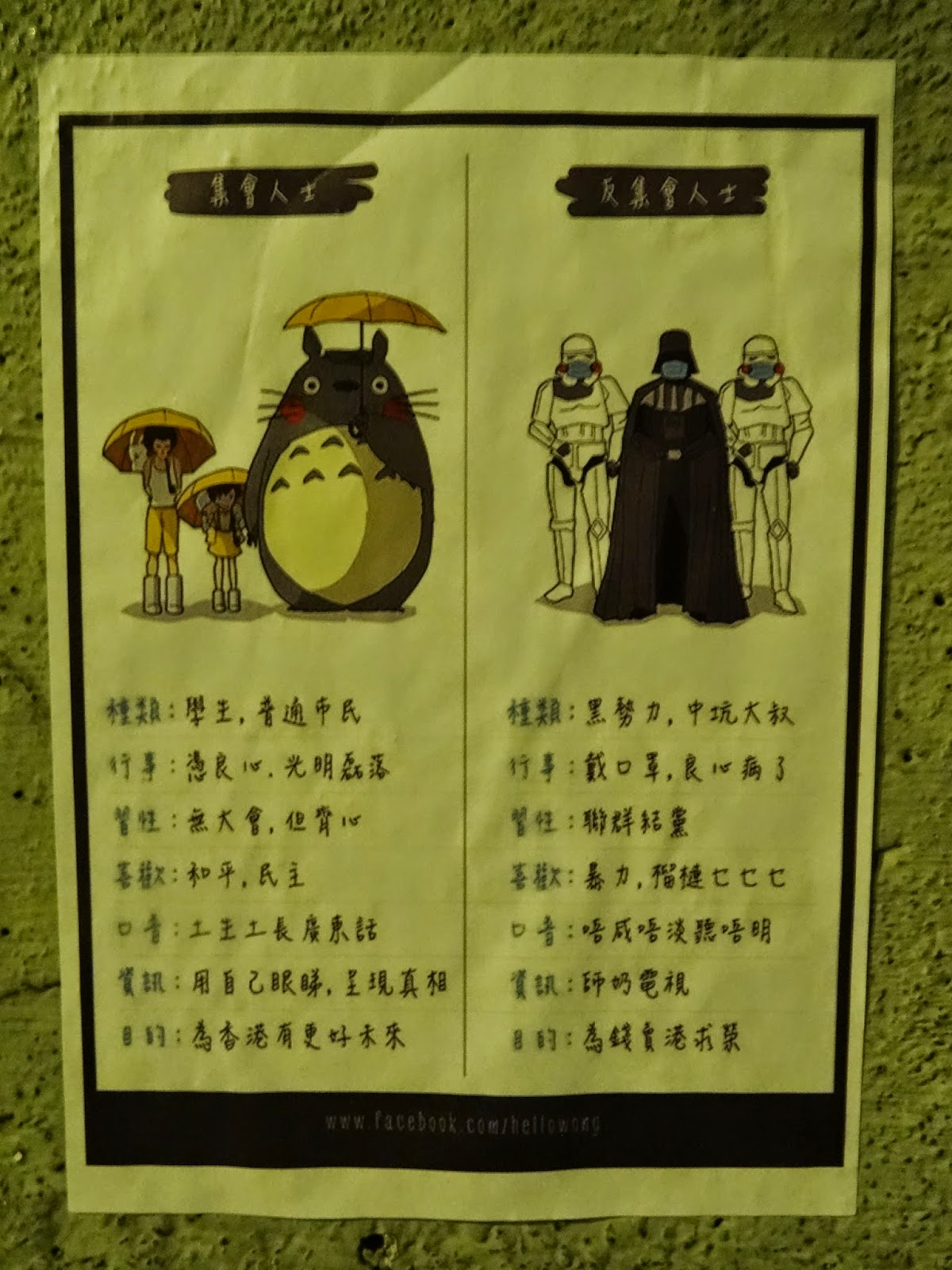 Whose side would you rather be on: that of Totoro
and friends or Darth Vader and the Stormtroopers? 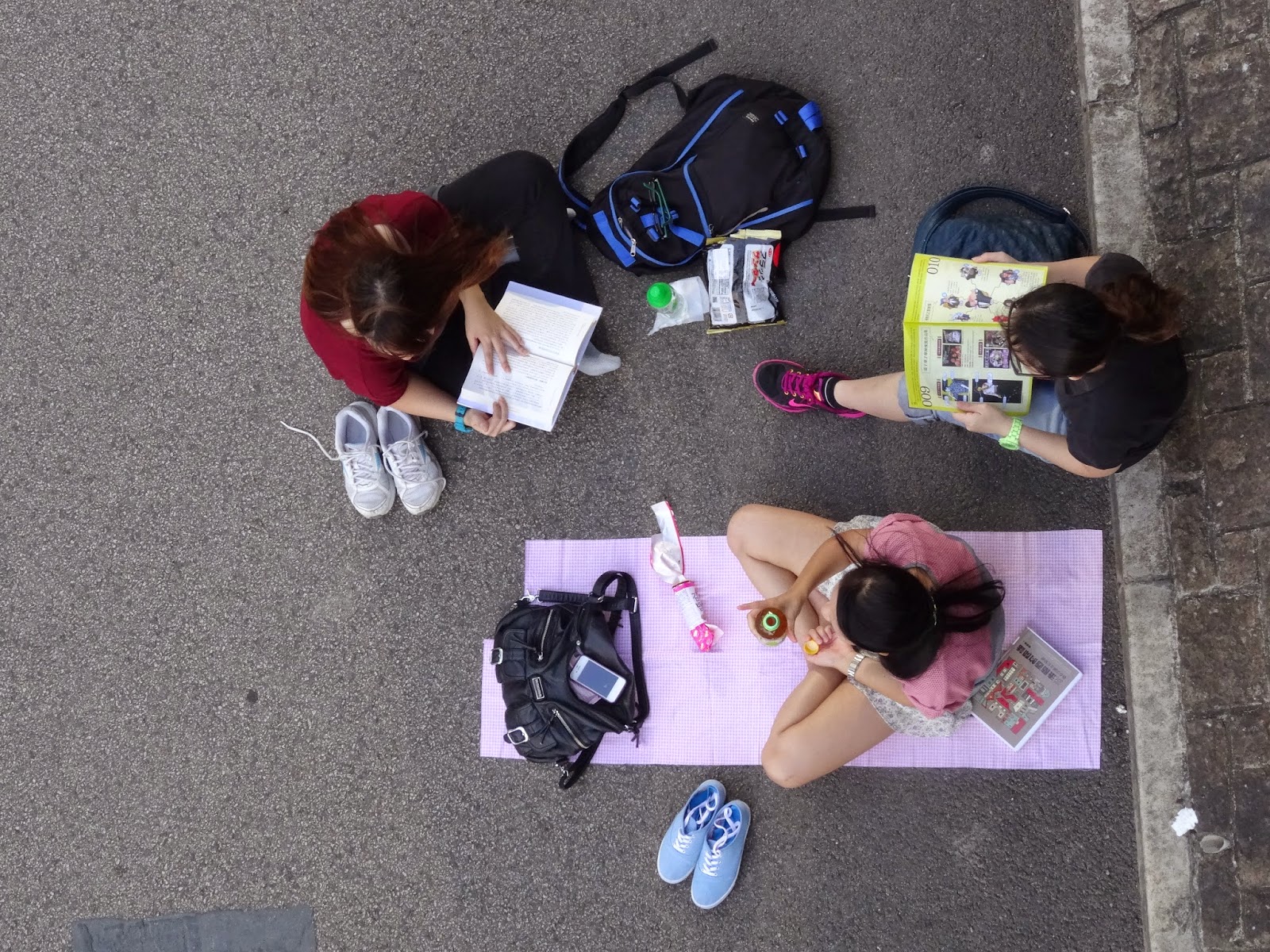 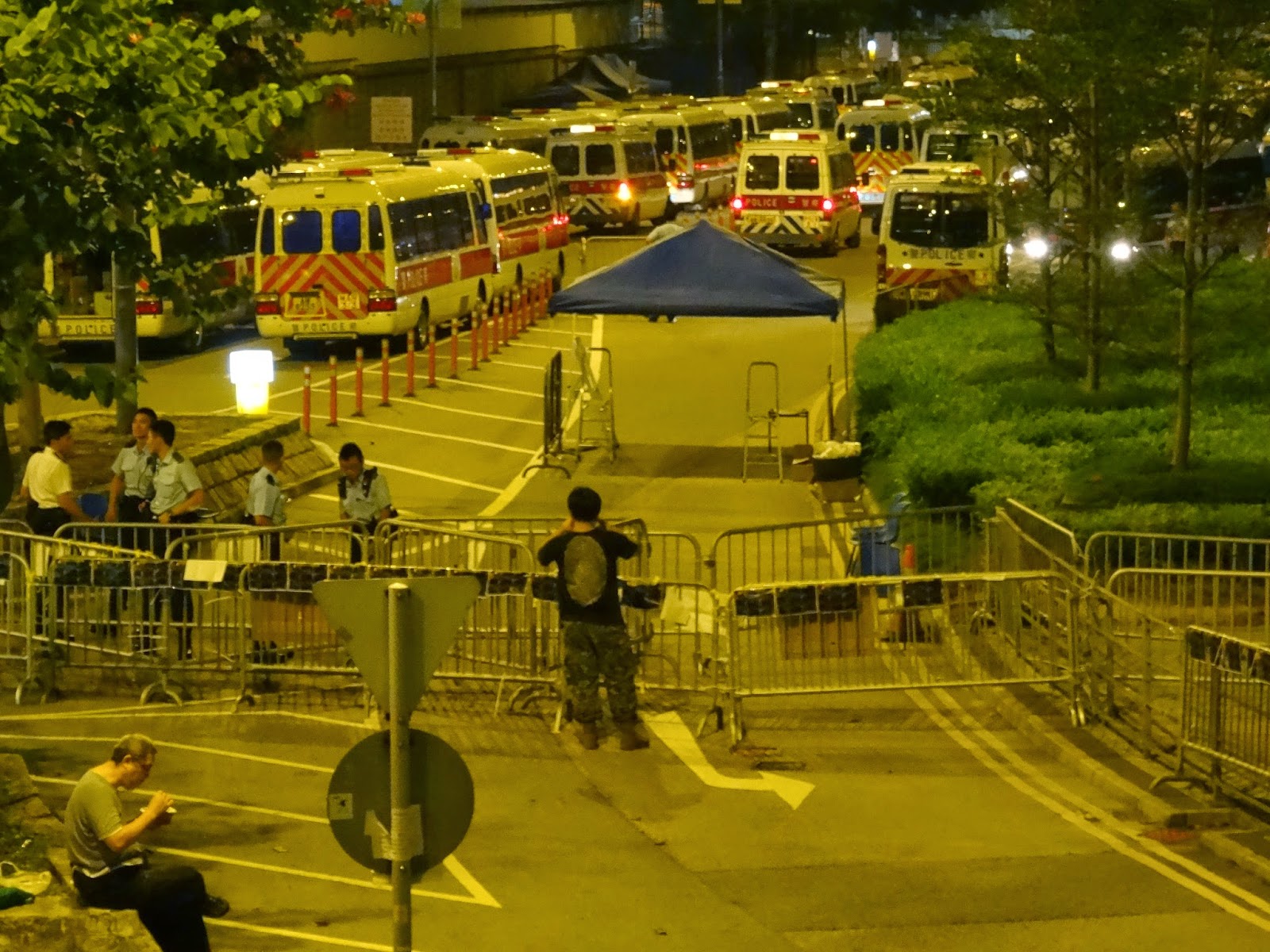 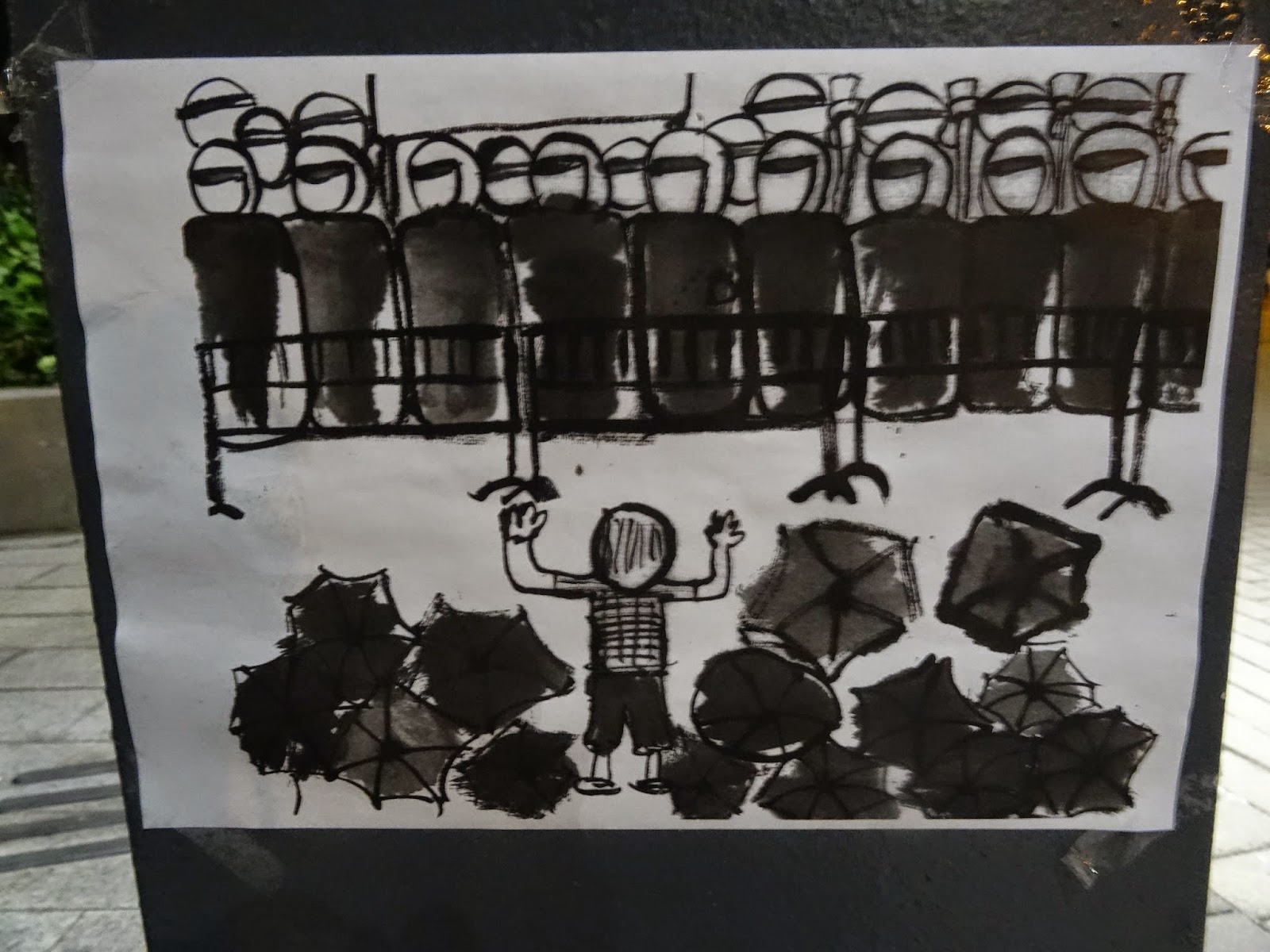 For those who need a reminder: the protestors here in
Hong Kong's greatest (defensive) weapons are umbrellas
Posted by YTSL at 11:59 PM

I haven't commented but I have been following your blog posts about the protests. I was glad to know someone actually in Honk Kong since American coverage is suspect, at best. Thanks for taking the time to let us know what's really going on!

Thanks for following my blog posts about the protests -- and commenting so I know! Re American coverage: I think it's something that's taking place so far away from home that the only way to make it interesting for many is to sensationalize it.

As I said to a visiting American friend at lunch yesterday (who had been to the protest areas on this visit), I feel calmer when I'm in the protest areas than when I'm reading about the protest areas -- not least because I can see for myself what's going on and what I regularly behold is a consciously civil movement. He agreed!

I appreciate your reporting on what you witness but please be careful. Having been in Bangkok during a few protests and coups I know that the western media can over state things but at the same time you need to be careful because things can get out of hand very quickly. Be safe.

After following the developments on the streets of Hong Kong over the last few weeks - it has created a kind of dizzying Dadaesque collage in my mind...That's why it is a relief to stroll through this particular blog, which could almost be from a street art fair...The image of Totoro vs Vader says a lot (of course for me Totoro automatically summons an image of Ponyo in my mind)...However, I think the overhead shot of the young people on the street, is the photo that might leave the most lasting impression.

There's a lot of artistic creativity on show at the protest areas -- and they make quite a contrast to the commissioned art installed as such as the Legco gardens.

Re Totoro: yeah, to my mind one of his friends is Ponyo. ;)

Re the shot of the young people on the street: remember -- that's what many of the Umbrella Movement participants look and act like... :)