Horror and fear on Halloween? 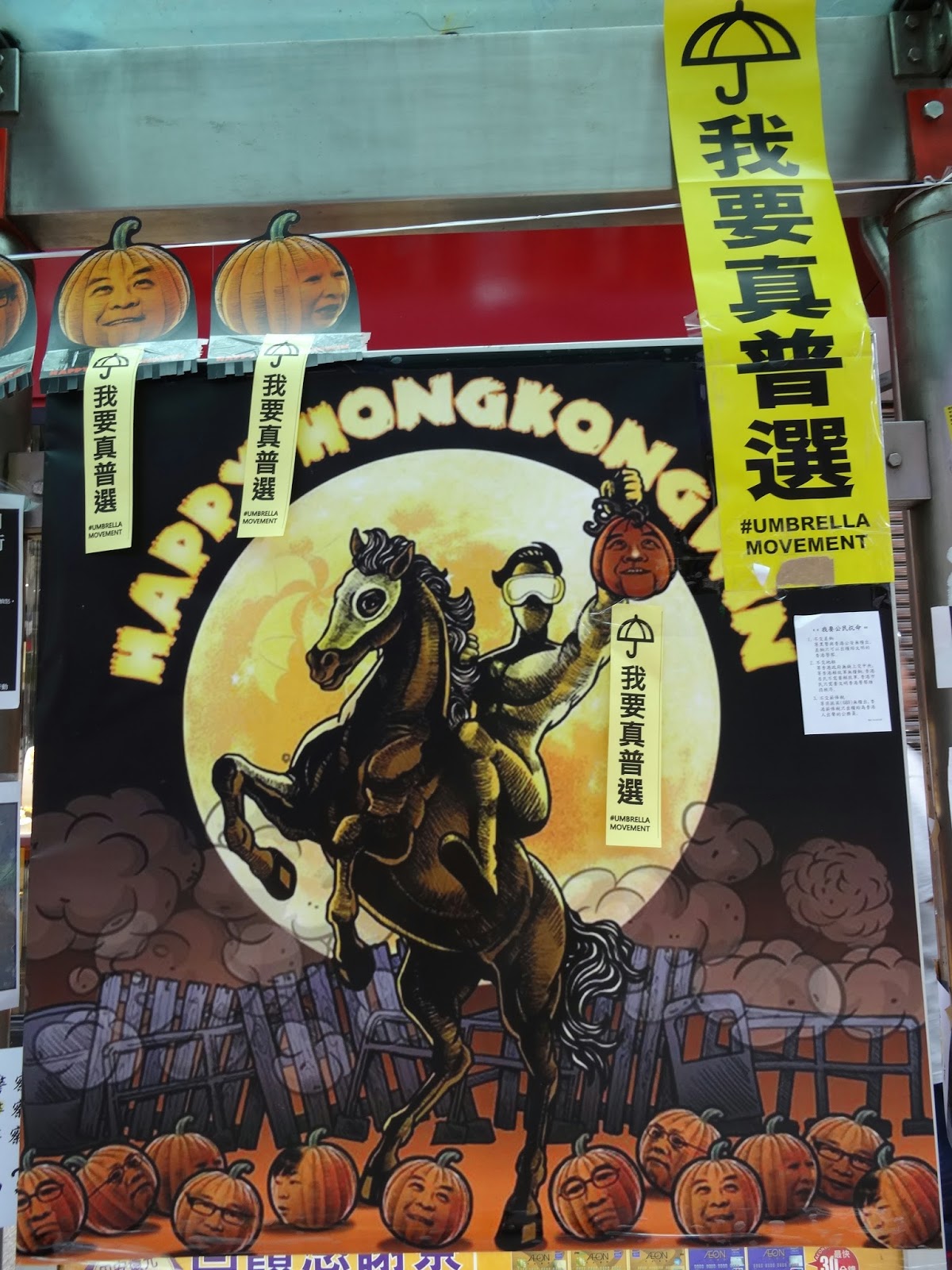 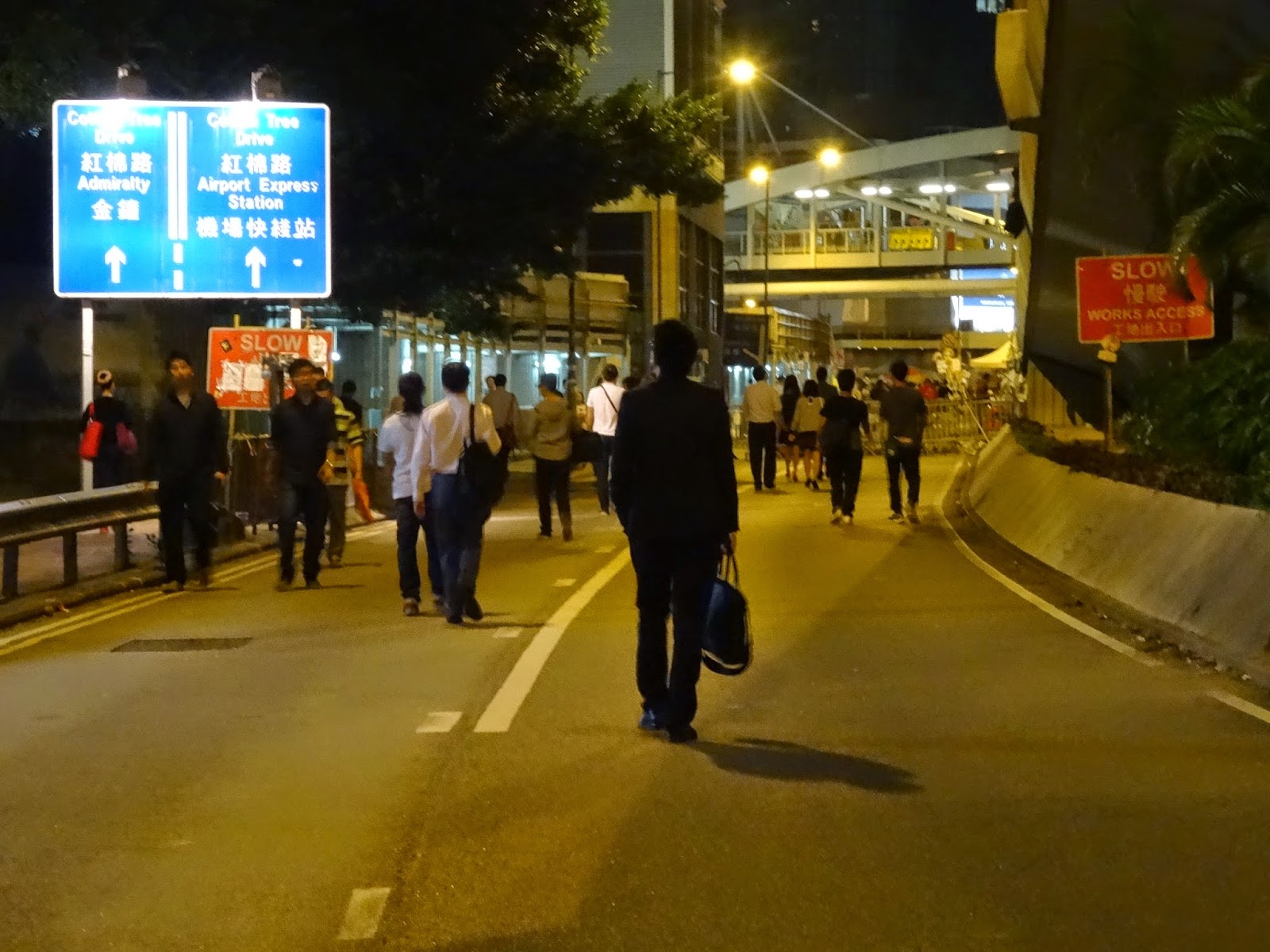 ...and for true horror, get a load of this from Laura Cha, a board member of HSBC Holdings who also is a member of Hong Kong's Executive Council, the chairwoman of the territory Financial Services Development Council and a Hong Kong deputy to the National People's Congress in Beijing:-

American slaves were liberated in 1861 but did not get voting rights until 107 years later. So why can't Hong Kong wait for a while?

Firstly, Ms Cha, you need to do a bit of studying - because, as the blogger known as Hemlock has pointed out, slavery wasn't fully outlawed in the US until 1865 and it was just five years later, in 1870, that freed (male) slaves were granted voting rights.

Secondly, what constitutes "a while" to you?  Put another way: are you saying that Hong Kongers should wait for 107 years (after 1997) to get genuine voting rights?

Thirdly, those talking about time should do well to realize that, as Scholarism's Joshua Wong has pointed out, time is actually on the side of the youth.  In an article translated from Chinese to English for The New York Times, the 18 year old also stated the following:-

Today, there are many middle school students active in the pro-democracy movement: Students as young as 13 have boycotted classes, while teenagers of all ages have been staying overnight at the protest sites. They protest gracefully, despite being attacked by police and hired thugs.

...Hong Kong’s ruling class will eventually lose the hearts and minds of the people, and even the ability to govern, because they have lost a generation of youth....

..I would like to remind every member of the ruling class in Hong Kong: Today you are depriving us of our future, but the day will come when we decide your future. No matter what happens to the protest movement, we will reclaim the democracy that belongs to us, because time is on our side.
Posted by YTSL at 11:39 PM

People should be very careful about what they say during contentious times like these. And she should make sure she has her facts right otherwise she looks even more the fool for saying them...

On one hand, I'm horrified by the utterances over the past month of the likes of CY Leung and Laura Cha. On the other hand, I'm glad that they've said what they said openly and that it has been reported -- the latter because it truly shows why many people feel there's a need to protest out on the streets of Hong Kong.

We've often tried to ignore it or sweep it under the carpet -- focusing instead on there still being much that's good in Hong Kong, in our lives, etc.

But there's no question that when doing this, it makes people like CY Leung then think that how they think is the way the majority feels, the status quo is A-okay and that they should govern and otherwise act accordingly. And that is a path that's going to lead to disaster in the long run, if not already.

I read Joshua Wong's article in the NY Times a few days ago. I'm glad you mentioned it here because it is an important statement. In choosing to be a leader, among other things, he may or may not become a martyr, whether he wants it or not. That does take time and inevitably - a bit of suffering. Aung San Suu Kyi earned her universal respect, and younger leaders today will have to earn theirs.

The other night on BBC TV, I saw an interview with the seemingly unflappable Emily Lau. She seems as persistent in her opinions as the much younger students. I don't have a knowledge of the full spectrum of Hong Kong politics, but the persistence of these older school democrats seems essential to Hong Kong and human rights.

My respect for Hong Kong's politicians also extends to the mainland. China's anti-corruption campaign seems like a good move to me.

I hope Joshua Wong won't need to become a martyr. In any case, I think he's already been more of a leader and inspiration than many of Hong Kong's nominal leaders.

From your comments, it seems that you have a greater respect for Hong Kong and mainland politicians than I do. Yes, there are exceptions -- but, right now, I think they, especially those in government, generally are failing to be the leaders the territory and country want and need.

On this subject, have you read the following linked piece by Anson Chan?

Thanks for recommending Anson Chan's article. Actually, I had already read it, but went back and read it a second time. SCMP is the best online source for info on the protests that I've seen. They present a variety of viewpoints and the quality of the writing is generally excellent. That newspaper has definitely earned my respect.

Am glad you read and liked Anson Chan's article. In an alternate universe, she'd have been Chief Executive of Hong Kong -- and, I'm sure, would have run/led it better than any of the men who have held this position.

Re SCMP: It's interesting that some people accuse it of being pro-Beijing, others anti-. I think that since there are both opinions about, it must mean that it's rather balanced in its overall coverage! ;)