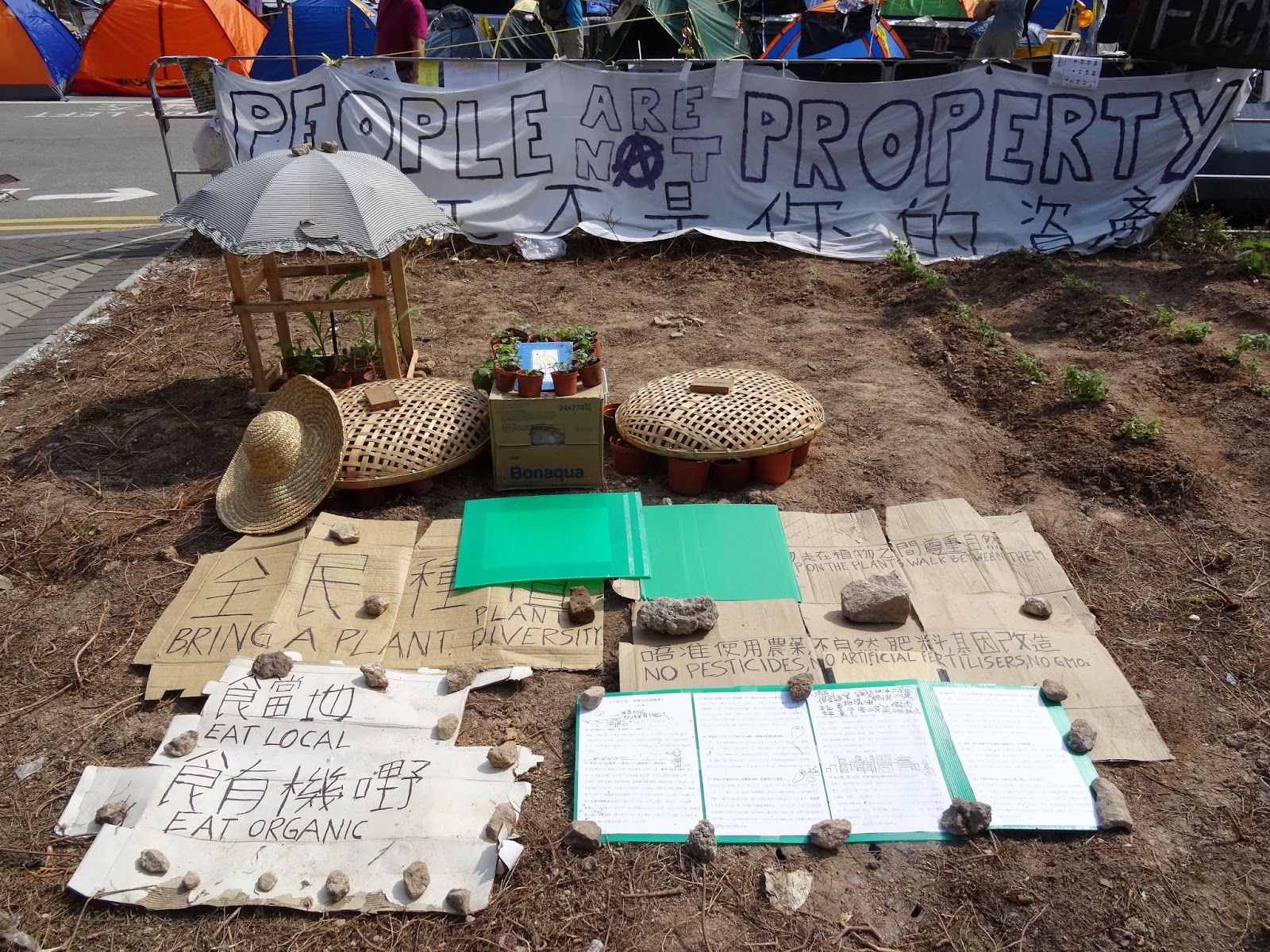 The messages at Admiralty have gone beyond
cries for genuine democracy 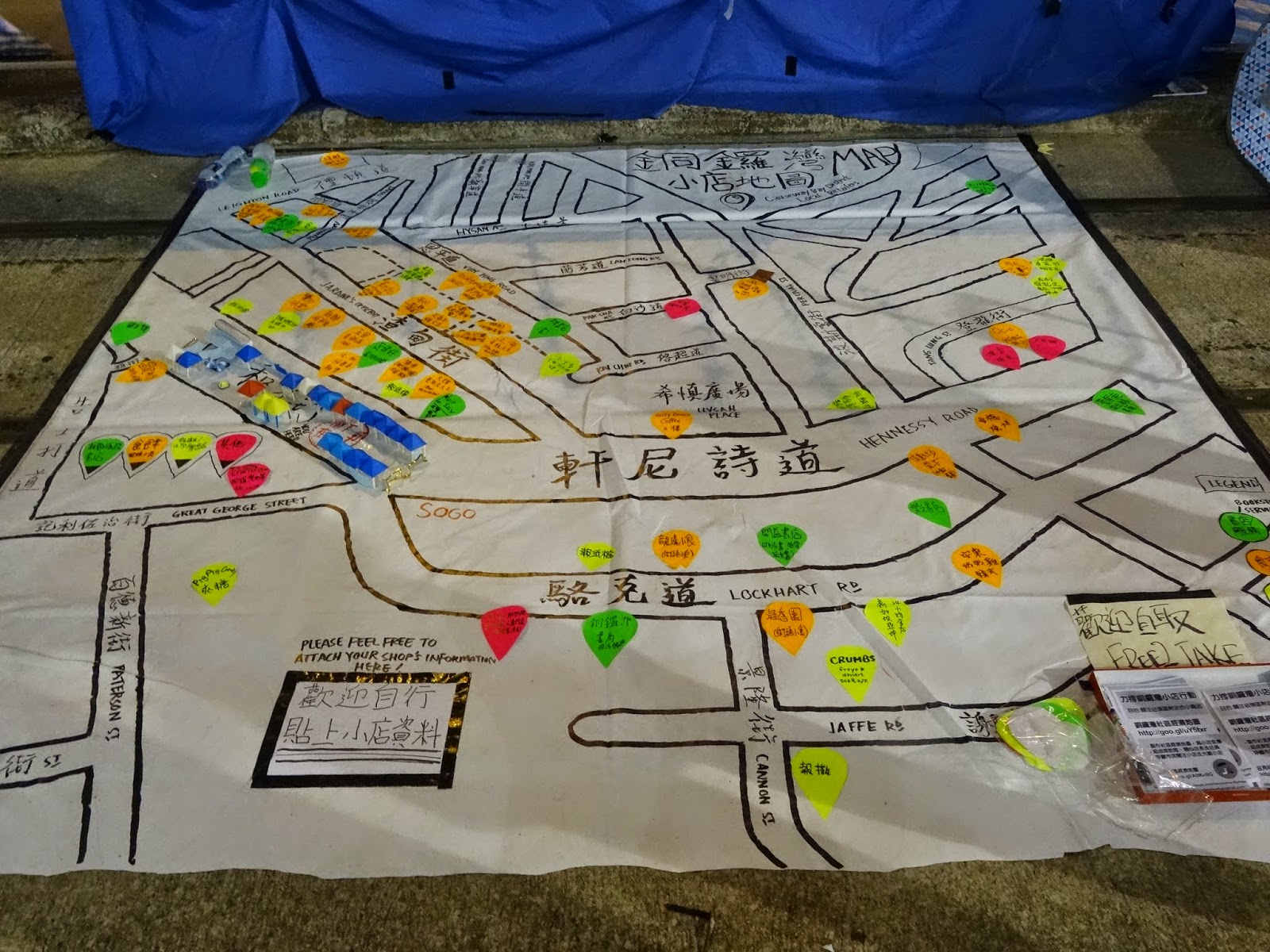 And ditto at Causeway Bay, where a map has been set up
showing the locations of local retailers, etc. in the area 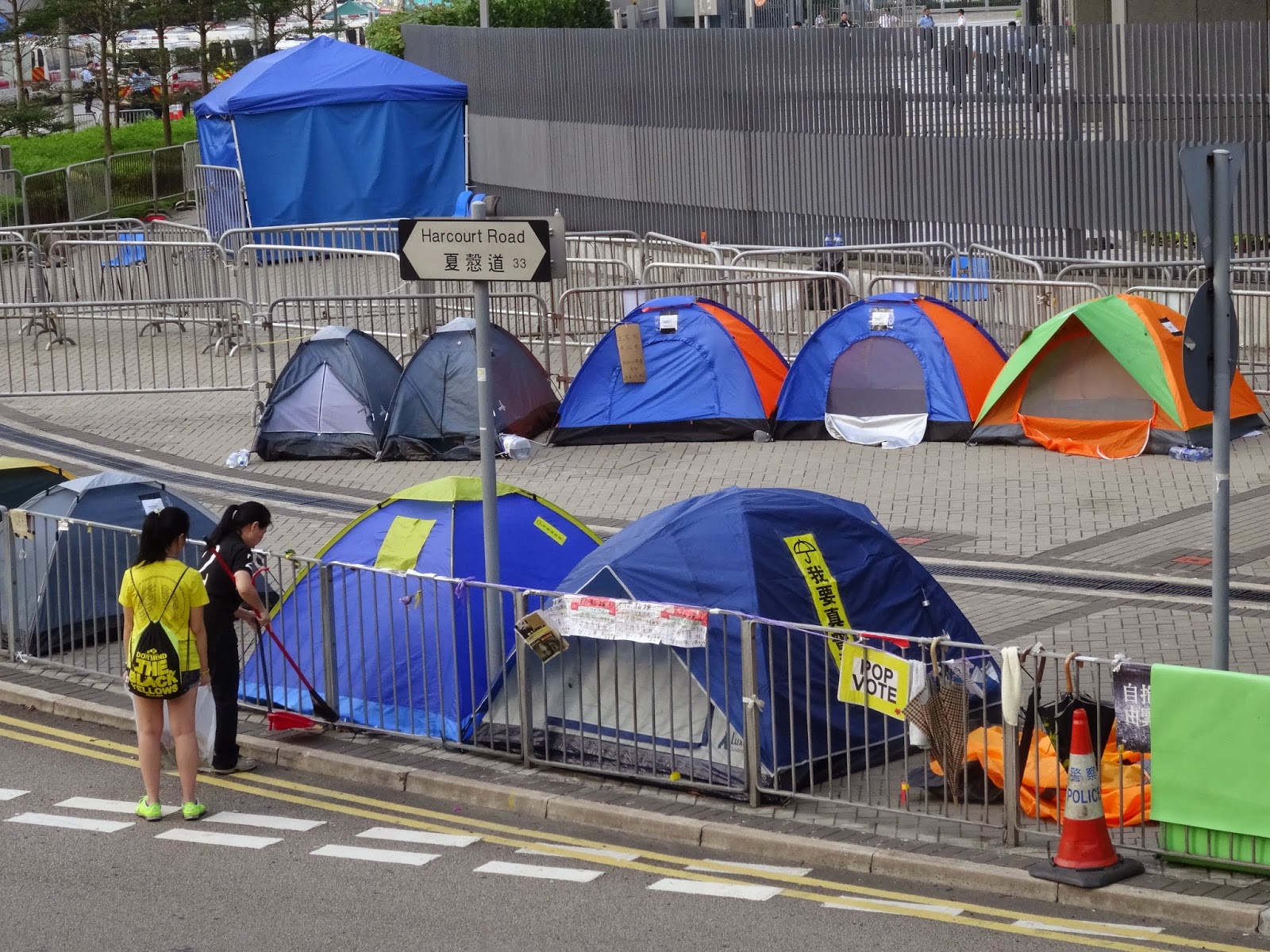 And the cleaning, and cleanliness, continues at Admiralty!

Two thoughts have been on my mind today.  The first is -- with apologies to those who are not fans of the kawaii creature -- that today's Hello Kitty's 40th birthday!  The second is that it's now November and the Umbrella Movement, which got going back in September, is still very much alive and kicking -- and, to judge from the behavior of some of the people I saw at Admiralty this afternoon, still attracting new visitors to the protest sites as well as regulars and those who don't so much visit as have made themselves at home there.


At the same time though, I think everyone knows that this "occupation" can't go on forever like this and talks of an endgame -- or, at least, the need for one -- have already begun.  In addition, while the road to genuine democracy looks to still be firmly blocked, certain other paths look to have been explored -- or even already taken -- by Umbrella Movement members to help make Hong Kong better, including the following (in no particular order):-


1) Looking after the environment -- by keeping one's surroundings clean.  This doesn't only mean no littering but also involves picking up trash, sweeping the roads, etc. -- and has been something that looks to have been done pretty much right from the start of the Umbrella Movement and remains the case at Admiralty, even if less so at Causeway Bay and Mongkok.


2) Caring for the environment -- by recycling plastics, paper, etc., and also asking visitors to the protest areas to bring water in their own containers rather than keep on purchasing small plastic bottles of it.  Add to this that the protest areas are pretty much no go areas for cars and other motorised vehicles, and you've got yourself much more environmentally friendly areas of Hong Kong than the norm!


3) Caring for other people -- by doing such as donating and sharing food, drink, etc., and volunteering time and effort to a cause one believes in.  On a not unrelated note: a fellow blogger emailed to tell me that she has been worried about venturing to the protest areas because of safety concerns but that the protests have got her wanting to do something to help Hong Kong, and she's gone and done that by way of donating to those in need.  There may be people who scoff at her fears but I prefer to focus on her being motivated to do good -- and do look upon it as a positive outcome of the Umbrella Movement.


4) Valuing local produce and agriculture -- and food security and self sufficiency.  It's been remarked by more than one person that if China wanted to quickly bring Hong Kong to its knees, it'd stop its supply of water and food to this territory with a "non-existent agricultural" policy.  While it's hard to envision a time when Hong Kong could ever be entirely self-sufficient, Hong Kong also should not be leaving 80 percent of its agricultural land idle.  And sure, not everyone wants to be a farmer -- but those who wish to do so should be encouraged, not discouraged, from doing so.


5) Rethinking shopping strategies -- and doing such as supporting local businesses, particularly those ones that cater primarily to Hong Kong residents rather than those people (who I can't really think of as regular tourists) who come over to Hong Kong and treat it as not much more than a giant shopping area.

Last Saturday, my friend over at The Fragrant Harbour wrote an excellent blog entry about the Umbrella Movement helping to re-balance the economy. It's also my hope that we're seeing a general move away from coveting luxury and "prestige" items, motivated in part by the sense that, contrary to what Deng Xiaoping said, to be rich per se is not glorious, not least since -- to judge from the examples of certain Hong Kong tycoons and other wealthy folks -- the pursuit of great wealth can sometimes make people become heartless, if not inhuman. How's that for a revolutionary idea?!
Posted by YTSL at 11:59 PM

Hi YTSL - Thanks for mentioning my blog post! We should also highlight that 80 percent of our water comes from China and the mainland could very easily literally turn off the taps on us if it wanted! Again this demonstrates our government's short-sightedness when it comes to food and resource security, making us more dependent on the mainland...

You're welcome -- and I really do think your post contains lots of great points! :)

Absolutely re the water -- and amazing, really, when I see the reservoirs that Hong Kong does have, and the tendency of people to waste it here.

Back to food: I find it ironic that so many mainlanders come over here to buy food, etc. because they don't trust the quality of the food they get on the mainland, yet Hong Kong is importing so much from the mainland!

Hi, YTSL! I'm so glad that you have been writing about this movement. I have been following your posts, but haven't managed to leave a comment yet. (I have not found much time for reading and commenting on other blogs the last couple months.) Anyhow, this is very interesting to read about! And I heartily support all those goals of the Umbrella Movement that you've listed!

Thanks for following my Umbrella Movement posts and for finally commenting on one of them!

I'm getting to the point where I'm thinking: there already have been thousands, of not millions, of words written about it. Maybe I should stop... but then I go and see something that I want to tell people about, and am encouraged by people like you reading and responding to my words. :)

I've returned to look at this particular blog several times and it is the one I will probably remember most...These photos recall the counterculture that began in the 1960's and refuses to die because it is rooted in ecology. "People are not property" in your photo is clearly an anti-corporate message that people don't want to be considered as commodities. Although I disagree with the methods of the protestors who have made unrealistic demands that have alienated too many (how else does one explain the reportedly 1.8 million signers supporting a court injunction to end the Occupation), at least these photos show a positive aspect of the movement.

Re the water - it made me recall a dvd I have in my collection, Johnnie To's and Ching Siu Tung's The Executioners (a movie which you reviewed in the past)...Another To movie I viewed this week, Life Without Principle, about HK people completely ruled by money - is relevant to the protests...Also saw Tsui Hark's early film, Dangerous Encounters: First Kind, a gritty movie which reflects the anxiety in HK long before the Handover films of Fruit Chan.

Thanks for your comments. They help give me an idea of how things can appear from afar.

Re the 1.8 million signers -- first, that campaign's so cowardly it's couched as a "Support Our Police" one. However much people's confidence in the Hong Kong police force has gone down in the past month or so, people still CAN support the police AND the Umbrella Movement.

Secondly, that campaign is happy with having children as young as 7 or 8 sign -- I personally know at least 2 people who have seen that happening in broad daylight -- and there are reports of forged names and signatures galore on the "petition".

Thirdly, when I've walked past the booths (which have tended to be manned by elderly men and see lai) set up on the street for that campaign, I've seen very few people actually seated at the table talking or signing those forms. No one has verified the reported 1.8 million signers numbers -- and I'm sure no one reputable will be able to do so.

Re movies: many films I've watched lately have had scenes that got me thinking of the Umbrella Movement. Maybe it's because of the timing and proximity but I don't think that's entirely so.

The problems that the Umbrella Movement have highlighted have been bubbling for years. Re Johnnie To: sadly, his latest film is unfortunately one of those that shows the kind of self-absorbed and -indulgent people that have done their bit to help get people out on the streets here in Hong Kong.