As regular visitors to this blog know, I think that Hong Kong rocks. Funnily enough, among the things I like about the Big Lychee are its rocks -- and so much so that I actually penned a feature article on them called Hong Kong Rocks a few years back!

More specifically, I've been blown away by the rock formations I've seen in places like Po Toi (see also here, here and here) and the geology of Ma Shi Chau. At the same time, it's undoubtedly the case that the two most famous of Hong Kong's rocks and/or rock formations are not on those islands but, rather, located in the hilly range that is seen as the divide between Kowloon and The New Territories.

Although I would like to some day, I have yet to hike up to the iconic Lion Rock. But last November, a friend and I went on a hike in Lion Rock Country Park that allowed me to get close to -- and actually touch! -- the legendary Amah Rock. And even though going there involved a detour along the official trail we were going along that day, it most definitely was worth it for the "I was there" factor alone but, also, the view from up there... :b 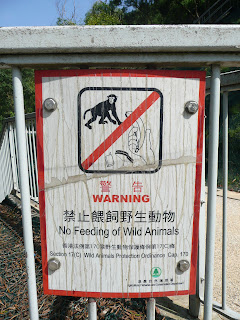 As a sign near the start of the hike warned,
we would be hiking through monkey territory 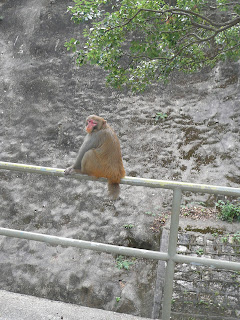 What -- you thought I was kidding?! 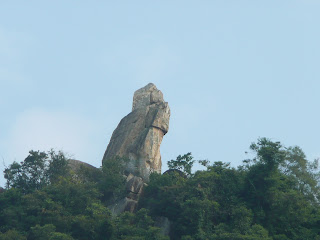 From this angle, Amah Rock looks less like a woman
carrying a child than an Easter Island type statue to me! 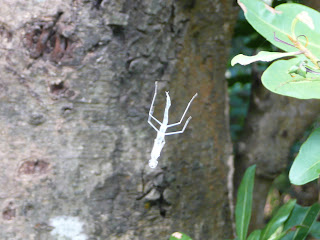 Speaking of mysterious objects -- doesn't it seem
like the photo above is of a ghostly insect?! 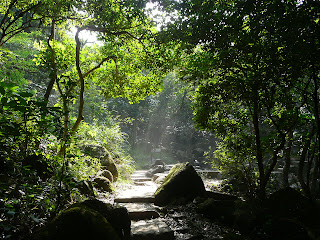 On the way up to Amah Rock, we passed through
this quiet and atmospheric area 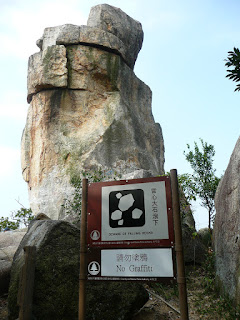 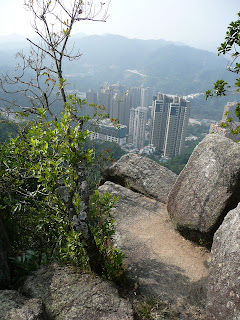 The view from up there 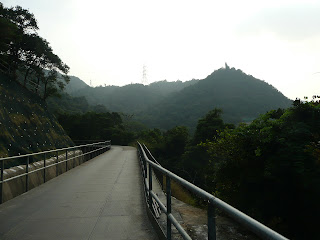 Amah Rock viewed from a distance
later on the same hike :b

I just read your Rocks article - very nice. I've actually been looking for a book, website or an indepth article documenting the various famous rocks around Hong Kong. Some pictures and locations would be also helpful.

Do you by chance know any?

At first glance I thought the Don't feed the monkeys sign meant Don't bring you monkey into the park. However it happened the monkey sitting on the rail looks like a well-fed simian.

The view is one of the most vertiginous I can recall from the many photos looking down on parts of Hong Kong during a hike. A real "don't look down" moment.

Thanks for the compliment re my Hong Kong Rocks article.

Re resources documenting famous rocks around Hong Kong: the one book I've read that is solely focused on Hong Kong rocks is one entitled Hong Kong Rock Stories (published in December 2007):-
http://www.hknature.net/eng/profiles/2008/book141.htm

To be honest, I wasn't too impressed by it as it had nice photos but not enough information about individual rocks.

There's another book called "101 Geological Landmarks" that came out last year. I haven't actually gone through it yet though, so can only let you know of its existence but don't have an opinion of it:-
http://www.geopark.gov.hk/en_education4a.html#14

Yeah, the monkeys I've seen in Hong Kong look well fed. Some people persist in feeding them despite the signs -- and the result is that they don't have much fear of people and are liable to come running if they hear plastic bags being rustled...

Re the view from Amah Rock: I agree that it's the kind that makes those with a fear of heights feel uneasy! ;b

YTSL,
Thanks for your personal input and blog we had a wonderful time in HK. We squeezed in 3 hikes, Maclehouse (stage 2), Lantau (7&8), Wison (1&2). We ate dim sum at Victoria City Seafood Rest, drank milk champagne at Tsu Wah, and had a great meal at Tung Po. We spent the night In Coloane in Macua and Lord Stow's pastries took us back to our days in Portugal.
I can't thank you enough for all the info that you have provided in your blog--a fabulous resource for anyone planning a trip to HK.
P.S. My husband is probably glad I didn't see this post before last week or I would have been on a quest to see a HK monkey. (I didn't realize there were any around).

I'm glad you had a great time in Hong Kong -- and did so by using my blog writings as a guide as to what to do and where to go (including to eat as well as hike). :)

Re Hong Kong monkeys: I really don't like them! Honestly, I much prefer Hong Kong's cows and water buffaloes. Did you see any on Maclehose Trail Stage 2 and/or Lantau Trail Stages 7 and 8? (In any case, good choice of trails to hike! :b)

YTSL,
We didn't see much wild life on the trail. We hiked early in the week when it was still hot, so not much was out. We did see 1 snake, and HK cows on the the road.

A snake!! I haven't seen one in months (thank goodness!). By any chance, did your snake spotting take place near Sai Wan on Maclehose Trail Stage 2? I literally skipped over a big one -- so big I thought it was a hose pipe! -- in that area while hiking there two summers ago... ;b

YTSL,
No it was on Lantau stage & it was a biggie! We would have probably missed it since it was in tall dried grass, but it moved. Since I don't know much about HK snakes we got out of there very quickly.

My general impression is that the majority of Hong Kong snakes are poisonous and/or dangerous... so tend to be wary of getting too close to them!