And so it goes... my documenting via photo-essays of my visit to Po Toi, that is!

And should anyone wonder: yes, I really do think that this island with a total area of just 3.69 square kilometers does merit so many photo-essays on this blog. Furthermore, I not only hope that after viewing my photos, you'll think so too but, also, that those of you who are not afraid of a bit of an uphill trek might be inspired to set foot on this southern Hong Kong island whose visitors are urged to -- as Martin Williams reports on his Hong Kong Outdoors website -- "remember to open your heart and let your imagination fly" in order to get the most out of their time there... ;b 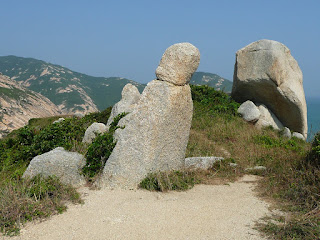 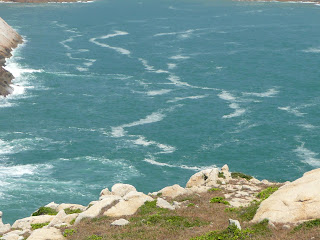 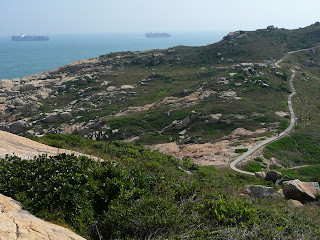 Large ships in the sea nearby act as a reminder
that, contrary to how it can feel,
one is not in the middle of nowhere! 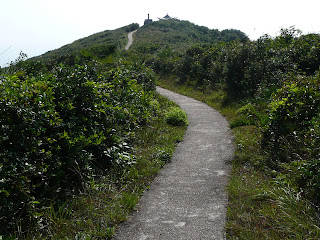 The summit of the 188 meter high hill that is
Po Toi's third highest peak (and no, there aren't
any trails up to the island's two higher peaks) 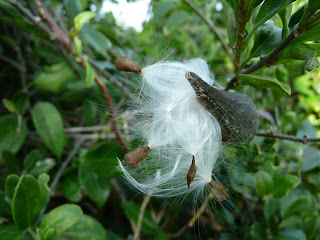 Are these wispy things found near the top of the hill
flowers? (And yes, I really would welcome answers
from botany-minded readers!) 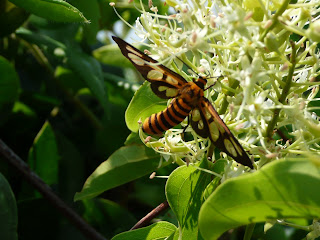 And what of this insect whose body
got me thinking of bees but whose wings
look like they should belong to a butterfly's?!
(Update: see comments thread for ID courtesy of dragonstar!) 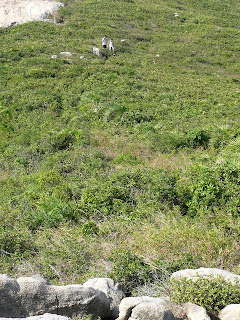 One thing's for sure though --
that which is known as the Rugged Trail
certainly is well named! 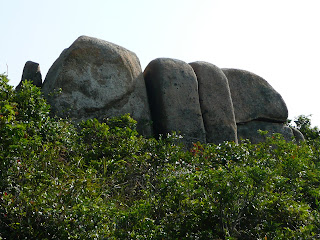 Ending this photo-essay with another shot
of an interesting rock formation --
this one looking like a cross between an elephant
and a loaf of bread to me!

And... er... hope this blog's readers aren't bored yet of Po Toi because I really am thinking there's enough for one more photo-essay from that day's excursion!! ;D

What a beautiful place!
I can't help with your questions, but I love the last photo - seems to have a smiling face!

Found the moth here! It's a Tiger-Striped Clearwing.

Thanks for visiting once more -- and IDing the moth! And have to smile at your comment about the last photo's rock formation looking to have a smiling face. :)

I like this series of posts, and I think it's a treasure of HK; Something not an average tourist, like me, know much about :)

I am not able to "see" the supine monk at least not as I understand the term supine--flat on one's back.

The pattern of the sea of Po Toi is striking. It could be the inspiration for a fabric design on lightweight silk or cotton. It is now on my desktop as wallpaper--very nice image.

Po Toi takes a bit of planning to get to but it's really not that far away from Hong Kong Island. Here's a link to the ferry schedule for your next visit to Hong Kong! ;b

I agree that the monk rock looks more like it's leaning back than actually flat on its back but Supine Monk is what it's been named!

And wow re my photo now being your choice of desktop wallpaper! Definitely count that as a compliment. :)

Are those steps through the Rugged Trail the hikers are on?

The last photo reminds me of a big friendly slug....

There definitely will be more Po Toi photos -- thanks for wanting more! :)

Those steps lead to the Rugged Trail -- parts of which are so rugged they're covered by the brush and you can't see it!!! :D