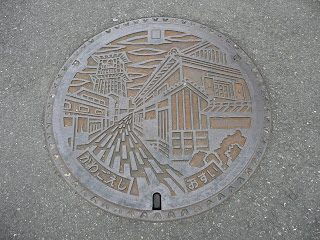 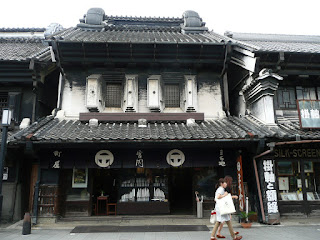 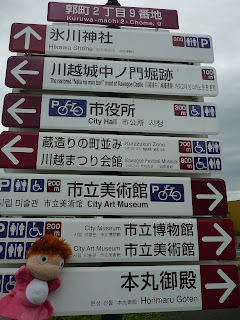 As many of those who know me well can confirm, I like to plan and follow plans -- at work but also in my leisure time. At the same time though, I can be flexible -- and if opportunities arise, take advantage of them by incorporating them into a new plan.

Such was the case on the final day of my most recent Japan vacation -- in that I originally planned to spend it in Tokyo, figuring that I wouldn't have enough time to go to some place else and then make it back in time to catch my airport limousine (a fancy word for a scheduled bus) and my evening flight out of the country. But this was before my Tokyo-based friend proposed that we make use of part of that day to go on a short excursion to Kawagoe, a town located around 40 kilometers away from central Tokyo but reachable by a direct train from Shinjuku Station (the major transport hub that happened to be the nearest train and subway station to my hotel).

In addition to its colorful Kawagoe Festival, this town is famous for its charcoal-blackened kurazukuri, fire-proofed buildings that traditionally housed warehouses and also were the homes of merchants. Although I arrived at the wrong time for the festival (though I was close enough that I was able to witness people preparing for the occasion in front of of one of the large floats put on public display for much of the year), I was able to view the distinctive karazukuri and more on what amounted to a whistle-stop tour of the town that gained prominence on account of it having been strategically located along the ancient highway to the Japanese capital.

Admittedly, if I had had more time to spare, I would have done such as spent more time at the Kitain Temple -- and checked out its Gohyaku Rakan (5oo (or so) statues of the disciples of Buddha. But this time around, the circumstances did not permit this Rather than be upset about this though, I was thankful that I managed a visit to Kawagoe at all.

In addition, I am among those who subscribe to the view that a visit to another country or place is considered a good one if one feels that there still are things left that one wants to see and do at the end of the visit. Put another way: this state of affairs means that one would like to return to that country or place. And goodness knows that I'm already thinking of my next proposed visit to Japan -- a country with many interesting sights, seemingly perennially great food, pretty good draft beer and many incredibly gracious people that I find myself appreciating and loving all the more with every visit to it. :)
Posted by YTSL at 9:34 PM

I love that manhole cover! It looks like a work of art.

Thanks for the comments on mine. I'm glad you liked the (unusual) colour post. I'm trying to catch up a bit. That lovely wool was a present from a new friend, and I'm currently attempting to turn it into my first shawl. Not that easy for a previously basic knitter!
About my black and white - there was no sign in the shop, and I hid furtively behind the stand to take the photo ;)

We share the same feelings about manhole cover. And thanks for responding to my comments over on your blog. :)

That is quite a manhole cover--an art deco rendering in metal, very Jazz Age. What is really amazing is the perspective the artist/craftsman achieved--real attention to detail in an industrial object.

Where did Ponyo decide to go? He seems spoiled for choice in the picture--a tough decision for a puppet.

You and Dragonstar make me glad that I took that photo of the manhole cover and put it up on my blog now! :)

Puppet Ponyo opted for the Honmaru Goten (Kawagoe Castle's only remaining building) and then Kitain Temple (where *she* popped out of the backpack to pose in another couple of photos). Then it was back to the train station and Tokyo! ;b