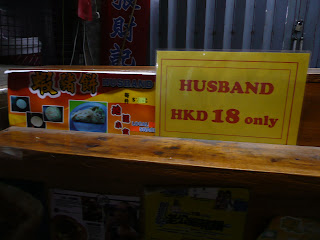 Tempting? Husbands for sale for only HK$18 each! 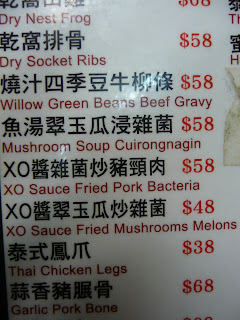 Not so enticing - a menu that includes
XO sauce fried pork bacteria and
mushroom soup cuirongnagin! :O
Earlier this week, two friends and I went to Sun Chui Wah, an eatery located on the same floor of Java Road Market as the more famous -- and larger and more crowded -- Tung Po. Since it's a claypot rice specialist, we ordered two claypot dishes to share among us along with soup and vegetable selections. All of the food we had for dinner that evening was delicious -- something I'd not be so sure of with regards to other options listed in English on the menu as XO sauce fried pork bacteria and mushroom cuirongnagin.

One of my friends -- both of whom are local Hong Kongers who can read the Chinese as well as English parts of the menu -- told me that what got translated into bacteria in English actually is a kind of edible fungus. However, neither of my dinner companions that evening were able to tell me what cuirongnagin is (supposed to be) -- and I can't find explanations or definitions of it via Google!

In any case, I don't think that I'll be in the mood any time soon to try either of those dishes on Sun Chui Wah's menu. Alternatively, if not for the fact that my two hiking companions and I had just completed a 15 kilometer long hike and wanted to have a sit down dinner (rather than a snack that we'd have to eat while standing out in or walking along the street), I would have to have bought myself a husband this evening at Tai O -- or, more precisely, a "husband" pastry/biscuit with prawn paste inside of it on sale at a stall being manned by what looks to be a husband and wife pair.

At just HK$18 for one, it'd seem that husbands are really available on the cheap in that fishing village in western Lantau! Joking aside, I'm wondering if there's any connection between the husband pastry on sale in Tai O and the more widely available in Hong Kong loh poh peng (a wintermelon pastry whose name gets translated to English as either wife or sweetheart cake that I do like to eat every once in a while)? If so, then if one were to judge by their fillings, it'd seem that the husband "cake" is the savory companion of the sweet wife/sweetheart cake -- and probably more of an acquired taste than the other in the bargain! :b
Posted by YTSL at 9:47 PM

Translation can really mess things up! Glad you sorted at least some of it out ;)

I love funny translated signs!
I've been going through your blog & taking lots of notes about food & drink. The next couple of days will be spent on planning out some hikes. A couple of quick Q's--should I wear gaiters? Do we need leech socks? We will be heading out Sat pm.

It looks like we should have some good days weather, how has it been heat wise?

Agreed that many things (and true meanings) can get lost in translation. Thank goodness I didn't have to rely on the translated text alone in both instances! :)

Ohhhh, you're visiting very soon! Glad to know that you've been going through my blog and it's got helpful info.

Re your specific questions: no need for gaiters (unless you're planning to specifically on trails that have sections that are known to flood -- something I wouldn't recommend in the days after rains) and -- touch wood -- but I've never encountered leeches in Hong Kong (only in Malaysia's Taman Negara).

Re weather: it's slowly but surely cooling down here... down to the high teens and low 20s (degrees Centrigrade/Celsius, NOT Fahrenheit).

A good website to know and regularly check (because the weather here changes so often):-
http://www.hko.gov.hk/contente.htm

YTSL, thanks for the reply. Just saw you have another hiking post--I am so excited.
We use gaiters in Australia for the snakes! Do you feel that all trails are safe to hike alone (the 2 of us)? Are there any dangers we need to be made aware of?

Aaah... snakes. Touch wood -- once it gets cool(er), one is less likely to see snakes. I'm hoping that the snakes have gone into hibernation. In any case, I haven't seen snakes for a few months now.

Re hiking safety in Hong Kong: bearing in mind that I'm a cautious hiker and I know that you're an experienced one... I think you and your husband will be fine if hiking by yourselves -- and especially on official/marked trails. Just remember to bring plenty of water -- and I also highly recommend that you bring along Hong Kong countryside maps and hiking books.

Check here for the maps:-
http://www.landsd.gov.hk/mapping/en/paper_map/cm.htm

(available at such as branches of Protrek in Wan Chai, Causeway Bay, Yau Ma Tei, etc.)

Re the books: there are more expensive English language ones but I am happiest with the bilingual (Chinese-English) ones that are available in the Chinese language section (i.e., basement floor) of Cosmos Bookstore, 30 Johnston Rad, Wan Chai and contain much of the info found on this website in book form:-
http://www.hkwalkers.net/eng/index.htm

One last thing: do bear in mind that not all of Hong Kong has phone reception -- and in significant chunks of hiking territory here, the service switches to that of (Mainland) China.