To and on Po Toi (photo-essay)

Last Sunday, I went on my 61st hike since moving to Hong Kong a little more than three years ago. To give you an idea of how far back I am in chronicling them on this blog, this photo-essay is of the early part of hike 45 on the list I've been compiling -- one undertaken on a beautiful day that had my regular hiking companion and I exulting over the fact that it was finally cool enough again (after a long, super hot summer) to attempt harder hikes. So, without further delay and ado... To get to Po Toi island, one has to take a kai-to ferry
from Stanley's Blake Pier (which stands near Murray House) 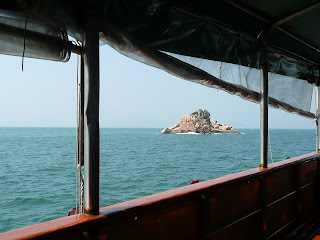 The ferry passes by small, uninhabited islands
before getting to Hong Kong's southernmost isle 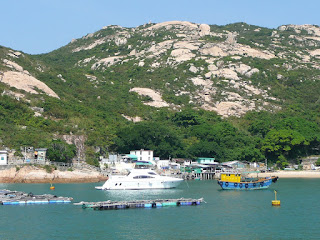 Land ho! And yes, your eyes do not deceive
-- Po Toi really is a very rocky island 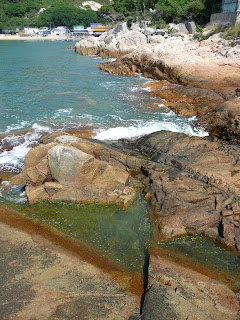 After landing on Po Toi, my hike companion and I
headed south-wards from the pier on Tai Wan
(Po Toi's main bay and township) -- initially along
a coastal trail that skirted the sea 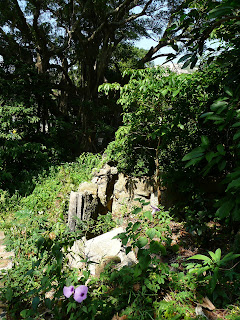 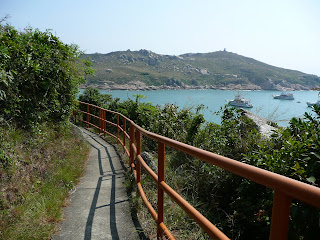 Yes, the railing police were here... 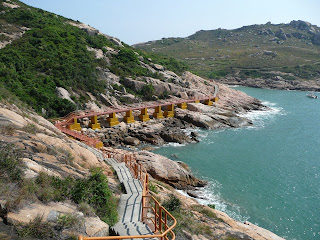 ... and further along the way as well 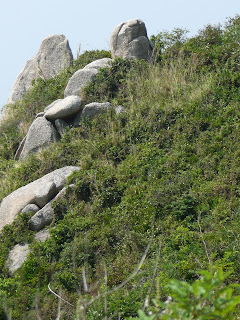 But from early on during our hike, my hiking companion
and I found our attention being caught more
by interesting rock formations -- does this one look like
a turtle or dinosaur-type creature to you? --
than anything created by humans...
And should you wonder: you ain't seen nothing yet with regards to the amazing natural rock formations to be found on this island. So do most definitely return to this blog at a later date to view the second installment of the Po Toi photo-essay series! ;b

LOL... those HK railing police sure do get around, don't they!

And yes, I see the turtle too. Hope to see more fantastic rock creatures in the next installment. :)

You've done a great job documenting all of your hiking. What a wonderful resource. I wish I'd done that when we were in Spain. I've gotten a little better writing about our hikes here in Australia, but I don't do all of them.
I see a turtle, but that maybe because you pointed it out.

The pastel colored buildings in Tai Wan township are lovely, particularly in the photo in which (I think) you are looking back at it across the bay after starting the hike.

Hong Kong seems to make very sure that its citizens are never too far from very stout, well anchored and not inexpensive looking railings when they venture into some of the parkland.

At the same time, I'm sure you remember during our Hong Kong Island hike when we were grateful for some railings, right? ;b

And oh just you wait to see what (other) rock creatures can be seen on Po Toi! :)))

Thanks -- I'm glad you're getting something out of my hiking photo-essays. I get inspired to take so many photos when I'm out hiking in Hong Kong and figured it'd be so wasteful if I didn't share... :)

Yes, Hong Kong can seem to have a thing for pastel with regards to building colors. And re the railings: trust me but there certainly are places without railings where I wish there would be!!! ;S

The color of the water looks so beautiful. And the walkway over the rocks in the next to last picture looks like it's made from a lego kit.