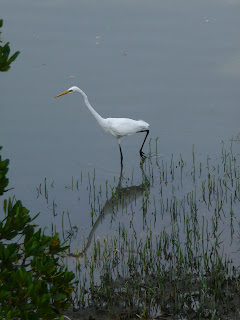 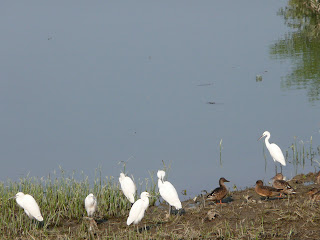 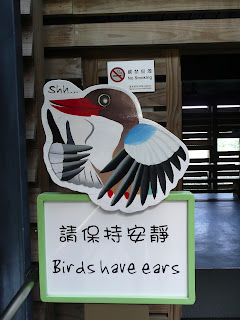 Yes, the chances of spotting birds are higher when
talking is kept to a minimum and the area is quiet!
At lunch today, I was talking to a colleague about why I enjoy hiking so very much in Hong Kong. One reason is that it helps me get away from the madding crowd. Another is that it is a good way to help me keep fit. A third is that it allows me to get outdoors and be among/in nature. One other reason is that it's one of those activities that forces me to be more sociable than I'm often inclined -- in that hiking really is something that is better (as in safer, etc.) done with others rather than on one's own.

Perhaps most of all though is that hiking helps me to find out and discover more about Hong Kong. One outcome is in terms of my hiking activities getting me to learn more about the territory's geography. I also find when encountering such as ruins of military installations (such as the Shing Mun Redoubt) and/or schools (e.g., at Lin Fa Shan) or abandoned villages (e.g., in the northeast New Territories) that this often motivates and/or inspires me to try to find out more about Hong Kong's history.

In addition, I have come to learn more about -- and, in the process, appreciate more -- Hong Kong's flora and fauna. And while it's true enough that I often fixate on colorful flowers and cool insects (in particular eye-catching butterflies), it's also true enough that I really enjoy many of the glimpses I get of many a bird in Hong Kong, be they soaring kites or smaller avian creatures perched on tree branches and such.

Often times, however, it's true enough that one is likely to hear birds more than see them when out on a hike. Indeed, it is the case on many a hike that one is far more likely to spot a number of birdwatchers -- the dedicated kind easily identified by their willingness to lug heavy as well as impressive cameras with super long lens on paths that sometimes are difficult enough already without carrying those extra pounds on them -- than large numbers of large avian life!

This is hardly to say that these Hong Kong birdwatchers are chasing a lost cause however. After all, around 500 species of birds have been spotted in the territory, including migratory birds that come from as far away as Siberia!

A particularly prime place to go for easy birdwatching is the oft maligned but actually not completely unattractive Hong Kong Wetland Park where over 235 bird species have been recorded as spotted -- and that actually is currently playing host to a Bird Watching Festival to coincide with prime birdwatching time in Hong Kong. And while there are times when loud children (and their often loud parents) abound, there also are times (particularly in the last hour or so before the park closes) and days when these disturbers of the peace are not about so much -- and on these occasions, bird sightings surely increase as does the enjoyment of the activity known as birdwatching itself! ;b

P.S. To my American visitors: Happy Turkey Day to you! :D

Elegant bird at the top there. Have not been here for a while but it's always worth a look.

Those are some beautiful egret photos.

Your post got me remembering that group of birdwatchers on the ferry ride we took. Remember how they appeared to be just riding back-and-forth to photograph the birds? I don't even remember what sort of birds, if I even saw them at all...

Am glad you're finding stuff to like whenever you visit! :)

Yeah, I remember those birdwatchers on the ferry too. They were taking photos like crazy... and so were you! ;b

Re the birds: I did a little Googling and think they're terns.

See here (scroll down and particularly check out the photo of the birds in flight):-
http://www.hkwildlife.net/viewthread.php?tid=30461&page=2

Well, those birds were small and moving very quickly! I think they only appear in my photos at specks -- alas! ;b