Before I went to Japan this last time, I mentioned to a friend my intention of paying another visit to Kiddy Land. Shortly before I left, she -- who is well acquainted with my Hello Kitty love -- sent me a text message with wishes that I'd enjoy my visit to Kitty Land.

In honesty, I actually had not originally planned on visiting Sanrio Puroland, the Hello Kitty-themed indoor amusement park in Tama Center, a city in its own right that also is a suburb of Tokyo (as opposed to Harmonyland, the Hello Kitty-themed outdoor amusement park in Oita, Kyushu). But after feeling a bit "shrine-and-templed out" at the end of the previous day (spent for the most part in shrine and temple-filled Kamakura), I thought that it'd be good to to visit a temple to kawaii-ness.

So off I went to "Hello Kitty's Town" via a train with images of Hello Kitty on everyone of its carriages (in particular, its stickers with messages against sticking one's hand in between the carriage doors!). And while I have to admit to initially feeling a bit overwhelmed by the commercialism as well as cute-siness of Sanrio Puroland, it's also true enough that the afternoon "Believe" parade got me all aquiver and a believer once more in the power of Kitty Chan and her ilk to make people smile and all happy inside... :) 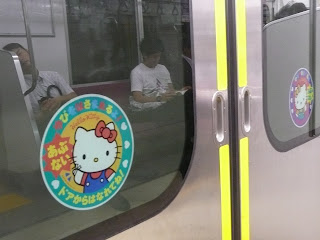 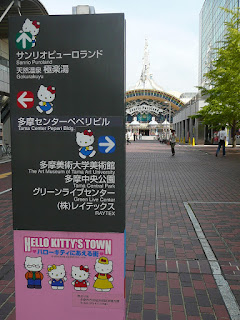 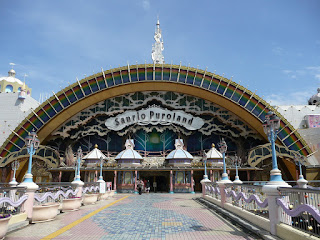 Imagine the excitement upon
getting this close to Sanrio Puroland... 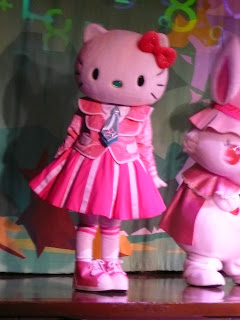 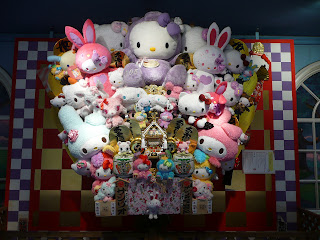 What may well be cuteness and plushie overload
for some others had me thinking "I want!!!" 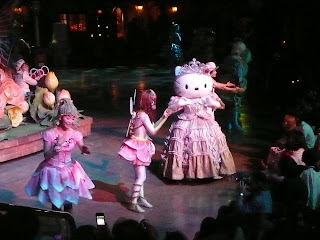 Hello Kitty in princess mode at the afternoon show 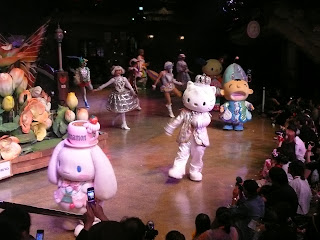 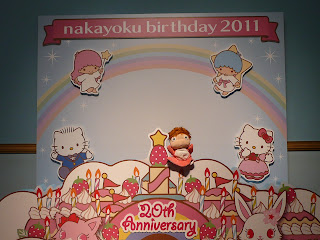 She may be a Studio Ghibli creation but Puppet Ponyo
-- seen posing here with Hello Kitty, Dear Daniel and co
-- could not be kept out of the fun at Sanrio Puroland :b
Posted by YTSL at 10:04 PM

Wow, wow, and more wow! Was Ponyo jealous of all the Hello Kitty kawaii-ness? Though in the photo she does look like she's enjoying herself.

I think Puppet Ponyo felt a bit overwhelmed by the Hello Kitty gang at Sanrio Puroland -- so much so she only got out of my backpack once that day! Can't blame her as that space really is so Hello Kitty filled. ;)

hehehe......I'm surprised she didn't asked to be dropped off at the Ghibli Museum for the day.

...especially since we actually passed through Mitaka one day! ;b

Sorry, never, as long as I live in Asia do I thnk ill ever understand the hello kitty thing. Especially with smart women like you...

Yes, I think it's definitely a cultural thang. I've read the critical theory and feminist readings of Hello Kitty but sorry, I just don't buy them. And if you're wondering, no way would I ever like something like Barbie. Hello Kitty on the other hand... yes, I really do find her adorable and often just very comforting to be around!

There really is something about Hello Kitty that appeals to many sophisticated and intelligent women (like YTSL) and not to others.

Among the women I know who have gotten Hello Kitty fever--perhaps from a cat bite?--are a university provost, a nuclear physicist and the concertmaster of a large symphony orchestra in the U.S.

I don't get it but then I don't need to.

Thank you for your supportive comments! And FWIW, I have a friend who's a vice president at a multinational company who also is fan of Hello Kitty. She tells me that seeing Hello Kitty makes her smile -- partly because seeing Hello Kitty (also) gets her thinking of one of her friends (i.e., moi!)! ;b

Hahahaha... I did miss this post... of course you would have visited Sanrio Puroland. :) I would like to go one day too and also to Disneyland Tokyo and Disney Sea Tokyo just to see what it's like. Maybe next year. The trip I just returned from was mostly centred around anime and with a slight emphasis on Mahou Shoujo Madoka. :p

Actually, it's not an "of course"... I've been to Tokyo before without visiting Sanrio Puroland after all. But this time around, I just felt that I might as well -- and do feel glad that I did visit. :)

Hi YTSL, how cool! If I had the opportunity I would totally want to visit Sanrio Puroland too.

A warning: one HAS to be a Hello Kitty fan to enjoy a visit Sanrio Puroland because it really is a super over the top Hello Kitty place! ;b