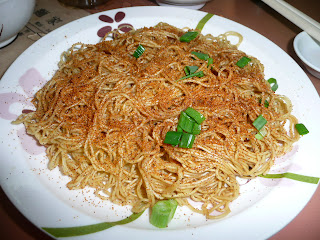 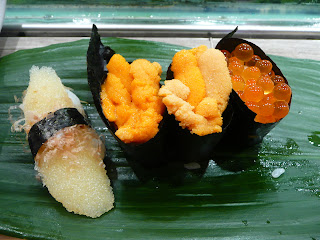 The culinary holy trinity of -- from left to right --
herring, sea urchin and salmon roe at Sushi Shin
(with the sea urchin sushi being so good I had to have two) 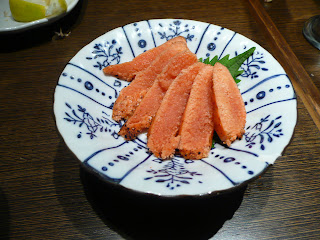 Uncooked mentaiko (spicy pollock roe) is great but
grilled mentaiko cooked right is downright heavenly! :b
Earlier this evening, my regular hiking companion and I dined at Ho To Tai Noodle Shop. A Yuen Long institution established in 1948 (pretty old by Hong Kong standards!), it's famed for its shrimp roe egg noodles and wonton soup. So, of course, that's what we had to have there!

Considering that it was awarded a Michelin star earlier this year, our total bill for two -- that also included a plate of cooked lettuce drenched with oyster sauce and a bottle of Coke -- of HK$126 (a little more than US$16) wasn't bad at all. And while I have to say that I've had better ha jie lo mien at Ping Kee in Tai Po, what we had at Ho To Tai Noodle Shop was pretty good too -- and was just the ticket after an over 10 kilometer hike that left us craving salty foods as well as liquids.

However, as I found myself reflecting on the long bus ride out of Yuen Long back to my neck of the Hong Kong "woods", the truth of the matter is that I love eating roe so much that it doesn't need a long hike to whet my appetite for it! Also, while shrimp roe noodles can be just the carbohydrate plus salty flavor ticket on evenings like this, my taste for roe actually encompasses a whole range of roe: including that to be found in Japanese and Korean as well as Chinese cuisine.

As an example, my favorite sushi is actually not toro (fatty tuna) but ikura (salmon roe) -- and the only reason why I don't consider uni (sea urchin) my absolute favorite is because it really has to be really fresh and of high quality to be seriously sublime tasting. Furthermore, I become a majorly happy camper when a sushi restaurant I go to also offers herring roe, tarako (salted pollock roe) and -- especially -- mentaiko sushi.

As befitting its Korean origins, I first encountered spicy pollock roe in a Korean restaurant (though, funnily enough, I can't actually remember whether that maiden encounter was in South Korea or a Korean restaurant in London -- on Poland Street, just off Oxford Street, near one of the Marks and Spencers branches there, to be more precise -- that I used to frequent back when I was a teenager!). And I felt like jumping for joy when I re-encountered that which known to Koreans as myeongran years later at a Korean grocery store in my Philadelphia neighborhood!

After returning to Asia, I re-encountered mentaiko on a visit to Kyushu, Japan's southern-most main island. A prized local delicacy there, it is sold in gift packets not just in food stores but also at railway stations and even the regional airport. And just imagine my delight upon discovering the daily buffet breakfast at my hotel included offerings of mentaiko as well as rice, miso soup, grilled fish, natto and more "international" (read "Western") offerings like cereal, breads and such!

Over here in Hong Kong, my "go to" place for mentaiko is Yi Pai Ya, an izakaya in Causeway Bay that specializes in ox tongue but actually has a lot of delicious offerings on its menu. At this dining establishment that I am equally comfortable going to alone or with friends, the mentaiko is served grilled by itself or as the filling for onigiri (rice balls). And although I do like onigiri, I cannot bear to have the mentaiko taste "diluted" by being mixed with rice and seaweed -- so it's mentaiko on its own every time for me! :b