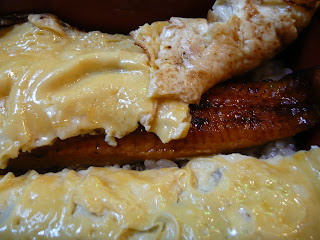 An unagi (freshwater eel), egg and rice dish
I had in Kawagoe that smelt and tasted heavenly! 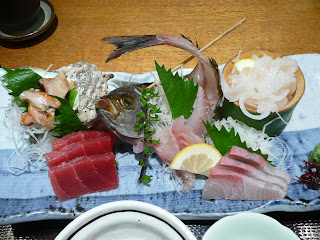 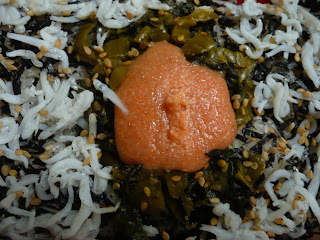 Surely it's not just me who thinks this dish that includes
a mentaiko center and tiny white fish on a bed of rice
resembles the Japanese flag? ;O
A couple of weeks ago (i.e., a couple of weeks into what has turned into my on-going Japan blogging marathon), a good friend of mine here in Hong Kong expressed her surprise that I had yet to blog all that much about the food I had eaten on my recent Japan trip.

To her and others who have been wondering: I definitely did eat a lot and well in the land of sushi, izakayas, yakitori, tempura, soba and so much more. I additionally ate a wide range of food -- in terms of culinary variety but also price (with the latter going all the way from onigiri breakfasts costing less than 150 yen a pop to a 6,300 yen (minus drinks) dinner at Nagatacho Kurosawa, a soba and shabu shabu specialty restaurant run by the family of Akira Kurosawa).

An American friend of mine told me that when he visited Japan, he only ate food from konbini. Although there was no way that I would entirely follow suit, I did go to konbini to get things like my onigiri breakfasts -- particularly if I had an early train to catch (like on the days that I went to Nikko and Kamakura).

Furthermore, there were times when I gave priority to sight-seeing over serious food hunting by doing such as eating my meals at train stations. But this being Japan, the food to be had at train stations can actually be pretty good -- and as it so happens, I ended up having what I actually reckon is the best tempura I have ever had in my life at a tempura-ya in Tokyo Station in the form of a less than 2,000 yen tempura moriawase lunch set that included seafood and various vegetables including an extremely strong tasting whole onion!

On other occasions, however, foodie me made it a point to eat the regional specialty of the place I was visiting. Thus it was that I had yuba soba in Nikko and unagi in Kawagoe. Re the former: I'm glad I tried yuba but it's not something I'd be making a beeline for again any time soon. Alternatively, the unagi meal I had in Kawagoe really was memorably delicious -- and the sweet smell of that basted unagi and sweet egg accompaniment really was great too!

In addition, I could not pass up making a return visit to Sushi Dai while on a trip which had me based in Tokyo. Although I could not experience the thrill of discovery this time around, I really still do reckon that this Tsukiji Fish Market sushi-ya is not only worth paying close to 4,000 yen for its omakase set but also waiting in line for one hour or more to get into for breakfast!

And while I decided to restrict myself to one meal at Sushi Dai per visit to Tokyo, my one meal there this time around served to remind me that sushi and sashimi really is so very good in Japan -- and also a bargain in terms of the price that one pays for quality (in that I'd estimate that prices in Japan are one third what one would pay for the equivalent quality in Hong Kong). Consequently, after getting reminded of this fact by way of that very good sushi breakfast, I could not resist eating one sushi and/or sashimi meal at least once a day for the rest of this trip!

In conclusion: even though I did do more than just eat while in Japan, the meals I had while in that country definitely were a factor in making me enjoy my vacation there as much as I did. And even though there was just one day when I'd go so far as to state that a particular meal was the absolute highlight of a single twenty-four hour cycle of my recent vacation (i.e., the final day of my vacation -- which saw me eating that unagi, egg and rice affair in Kawagoe), I also truly can see that Japan is one of those parts of the world where super foodies might want to go to just to eat! :b

Your food photography is fantastic. It's hard for me to capture food well. I think it's always fun to eat on vacation and particularly in other countries from where I live. Sounds like you had great experiences in Japan.

Thanks for your comments! I'll have to amend that bit in the Photo Hunt entry now about this entry being comment-less. :)

Re the food photography: It's easy if the food is good looking like Japanese food often is. (Malaysian food on the other hand is really tasty but just often looks not that great!)

I like that photo with the fish or fish back bone?

Were you on hols or work assignment?

That photo's got plenty of fish as well as fish bones. And I was in Japan on holiday. Don't think I'd be able to enjoy myself even a tenth as much if I had been there for work! ;b

That sushi display is so beautiful and unique!

That sushi display was indeed pretty -- so much so that I figured it'd be a shame to not snap a photo before I dismantled and ate it! ;b