Although there is indeed a Hong Kong Island, the territory of Hong Kong is far more than just one island. Instead, that which has been a Special Administrative Region of the People's Republic of China since 1997 geographically consists of a peninsula (Kowloon), the New Territories and 236 islands (including Hong Kong Island, Lantau, Cheung Chau -- and Po Toi).

That which is Hong Kong's southernmost island is by no means its least well known. In international literary circles, it has a place in the sun courtesy of a climactic section of John Le Carre's The Honourable Schoolboy being set there. But among Hong Kongers, Po Toi is probably best known for its interesting natural rock formations, some of which you'll see, as previously promised, in the photo-essay below:- 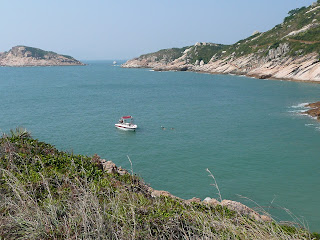 Before, we get to the rocks, here's a reminder that
Po Toi is an island where pretty scenery is abundant 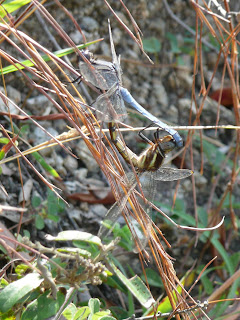 Also on the island, my hiking companion and I
spotted dragonflies behaving as... ahem... naturally
as certain butterflies and grasshoppers before them ;b 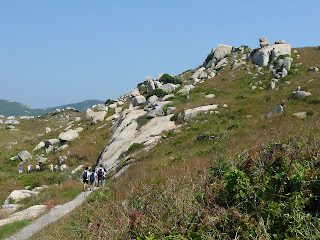 Still, on this rocky island, there really is little question
that it's geological wonders which most abound 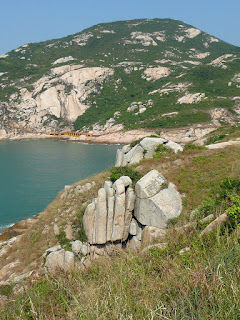 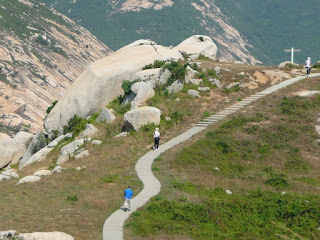 Still, there's no doubt that Tortoise Rock (aka Turtle Rock)
was the natural formation that most bowled me over 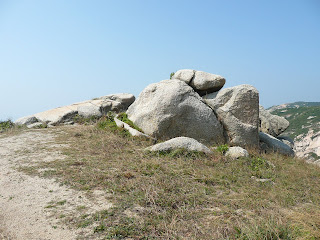 ...and this even more so upon seeing that this is
how the same rock formation -- no lie! -- looks
when viewed from another angle! 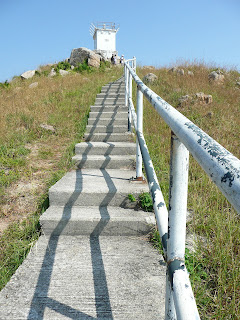 For the best views of Tortoise Rock, approach it
from the south along the path that goes up
to the lighthouse on Po Toi's south-eastern headland 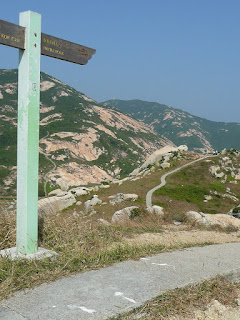 Ending this photo-essay with one last view of
Tortoise Rock along with hints of
what else was to come on our hike...

To be continued... for Po Toi may be small but really has oh so very much to see (and that captured this shutterbug's attention)! ;b
Posted by YTSL at 10:06 PM

Great rocks! And thanks too for that enlightening sex educational photo. Although perhaps it should have come with the warning: "Do not try this at home, unless you are a dragonfly"! ;p

The view of Tortoise Rock from the lighthouse is excellent but antother really impressive aspect of the last photo is the trail that one can see just to the right of the signpost that looks as if it goes up and up and up--or down and down and down, depending on where you start, of course.

I would think that a hiker must be pretty fit to get to the top of that trail and the coming down could also be taxing.

Is it featured in the reference post which asks us to guess how many steps to the top of a hill?

Isn't HK a wonderful place! Thanks for reminding us

Bwahahaha at your dragonfly related comments! (And yes, have to say that my regular hiking companion and I were amazed at the positioning of that pair!) :D

Yes, that trail (and its ascent) was indeed in that reference post. Have to say I really felt a sense of achievement upon going up that hill... and it gave me confidence to tackle more difficult ascents (which I duly went ahead and embarked upon in the months after). :)

Yes, Hong Kong really is indeed a wonderful place. BTW, hope you got to be outdoors today -- wasn't it so very beautiful this afternoon? :)

Tortoise Rock is definitely recommended as a sight to see (and site to visit) in person. Just be warned that good viewpoints for it does involve some hiking (walking) to get to. :)

Cool rock turtle. I see people swimming in the first photo and wonder if people swim from their boats a lot or is it dangerous?

Re the swimming from boats: I wouldn't do it myself but there do seem to be quite a few people who find it really enjoyable.

You wouldn't do it as you don't enjoy swimming or are there sharks, etc in the waters?

I don't generally enjoy swimming. Also, don't know if I told you before but I got very badly bitten by jellyfish as a child (and have scars still to prove it)... :S

Hmmmm... if you've genuinely got a question, please re-post on this thread minus the link to a commercial website. Thanks.