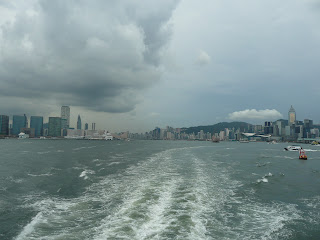 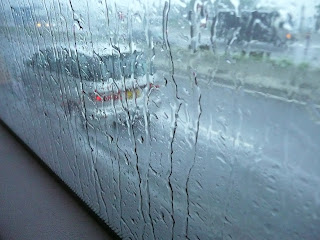 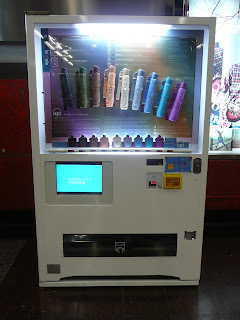 Hong Kong is a place where one regularly sees a lot of water about -- in harbours (such as iconic Victoria Harbour), surrounding islands (including Hong Kong Island and Lantau but also myriad smaller islands such as Cheung Chau and Po Toi), rivers and streams But as can be witnessed as recently as this week, it also is a lot of place where a lot of water regularly falls from the sky.

Put another way: it rains so much here that the Hong Kong authorities not only have rain warnings but three levels of them (coded in various colors) and special thunderstorm and -- we're getting serious here -- tropical cyclone (think typhoon) warning bulletins, tracking systems and dedicated pages on the Hong Kong Observatory's website.

Indeed, it rains so much in Hong Kong that there's money to be made in installing umbrella vending machines in heavily trafficked spaces such as MTR stations! In addition, I think it says something that my blog statistics show that my entry on things to do in Hong Kong when it rains is one of the most popular (so much so that I decided to follow up entry with more suggestions as to what to do in Hong Kong on rain days to help those looking for such ideas)!

Lest there be any doubt: yes, storms in the Fragrant Harbour can make for spectacular sights -- though the problem with trying to take photographs when it is raining is that it's hard to do so without getting thoroughly wet. (Also, there's the matter of trying to avoid being poked in the eye by the umbrella tips of people passing by -- something which is hard to avoid even when one isn't standing still in the crowd!).

From experience, however, I've found that buses are good dry vantage points from which to take rain day photos. And, as I think the top-most image on this Photo Hunt entry shows, cool pics can also be captured before the rain starts pouring but when the dark storm clouds already clearly are a-gathering! :b

Loved all of your rain photos.. never saw the umbrella vending machine before.. You asked if my rain on a sunny day lasted long.. No it was over almost as soon as it started. Thanks for coming by to see my wet/rain.

didn't realize it rains so much in hk.

Great take on the theme. We get a lot of rain here too but I've never seen an umbrella vendo machine. That gives me an idea. ;)

An umbrella vending machine?? never heard of that, how interesting! Great HK shots for the theme, happy weekend!

Great post for the theme. Very interesting information and perfect shots to illustrate wet/rain. I love the way you caught that wonderful cloud and rough water in the the first shot.

Thanks for your comments on this post and also in response to my comments over on your blog. :)

...so now you know and will be better prepared should you ever come and visit here. :b

A caveat: have never seen anyone actually using the umbrella vending machine... ;)

So now you've heard of AND seen an umbrella vending machine! ;b

Thanks as ever for looking but also reading. :)

Love the rain on the window in the car photo. Before I read your text I thought the umbrella vending machine photo was hehehe... super super large wet eye make up.

Wow I won't complain about the rain we get in London.. less than a third of what you get in Hong Kong! Great take on the theme!

Wow the clouds in the first photo look ominous! Great shots and always a fun informative read. I know so much more about Hong Kong, that I might never have learned otherwise because of you.. Thank you :)

Umbrella vending machines - how cool! All three are nice photos; that storm cloud in the first one is impressive.

About Venice - don't worry about acqua alta at all. Because it's a tidal event, it only lasts a few hours and parts of the city aren't impacted. I've experienced it a number of times and it was actually kind of interesting.

I suspect that Adelaide is as dry as Hong Kong is wet.

I can relate to the rain woes, as it is, rains make Manila's major roads a big parking lot because of traffic and flooding :(

Am glad you like the rain on the window -- that's actually taken from the bus I regularly take to work. And teehee re your initial thought re the umbrella vending machine -- I guess it was the colors that made you think that, right? ;b

One thing though about the rain in Hong Kong vs London: in Hong Kong, it often really pours, so I'm actually thinking that if you were to count the hours or days of rain that the two places have, it might work out to be about the same! ;b

You made my day with those comments. I'm glad that you get as much as you do out of visiting my blog. :)

That umbrella vending machine photo sure is attracting comments! And thanks for the aqua alta info -- Venice remains on my list of places to visit... some day! :)

I suspect you're right! ;b

Ya, the Philippines sounds like a place that is plenty rainy alright. It seems like this year has been particularly bad. I feel for you guys in Manila (and also the people living in Thailand).

Thanks for reading as well as looking -- and the umbrella vending machine photo sure seems popular among the Photo Hunting "crowd"! ;b