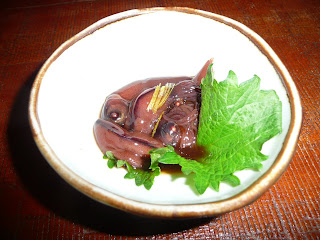 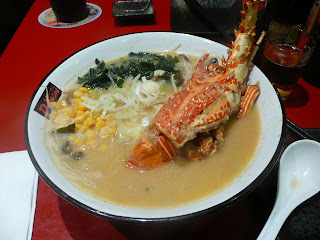 Not your usual bowl of ramen --
one with a surprisingly large lobster in it!
As regular readers of this blog know, I'm a big fan of Japanese food -- both in Japan and outside of it, including Hong Kong. So it was to be expected that the day after I viewed my last film of the 35th Hong Kong International Film Festival proper (officially part 1 but, really, part 2 is so small in comparison that it's more like an afterthought than a proper second part), I headed to a favorite Japanese restaurant for one of the first dinners in a week that I could eat leisurely and/or in a part of Hong Kong of my choice (rather than dictated by screening venue).

To my surprise, I found that the Taikoo Shing branch of Senryo that I go to so regularly that the waitstaff know me by sight (and the manager knows my name) was unusually bereft of customers -- so much so that I could walk right in and find an empty seat by the counter. Seeing my shocked expression, the manager came over to talk to me -- and told me the woeful tale of how patronage has dramatically plummeted since the news of radiation having come out of the stricken Fukushima Daichi nuclear plant started being reported in the media.

Although I'm no scientist, I think I know enough to be able to judge that the fears about radiation out of that northeastern Honshu nuclear plant is generally way overblown. In addition, I also happen to know that none of the sushi I regularly eat comes from the seas off northeastern Honshu. So I most definitely have no qualms about eating sushi now (as well as previously) -- and proceeded to demonstrate just that that evening.

Unfortunately, I seem to be in such a minority these days that the waitstaff are ever so grateful for my patronage to the extent that a couple besides the manager actually told me how happy they were to see me again and thank me for eating at their restaurant that evening. Even more embarrassingly, when I went to the same eatery again this week, they gave me a complimentary portion of seafood salad that normally is one of the pricier items on their menu!

Still, it was at another sushi restaurant yesterday evening that a foodie friend and I got our most dramatic taste yet of the crisis that Japanese, particularly sushi, restaurants are currently facing in Hong Kong. More specifically, at Sushi Shin, a high end sushi-ya that normally you have to book in advance to get into, we saw only four other customers in total in the two and half hours that we were there for dinner!

For the record: I've enjoyed the sushi I've eaten this past week or so as much as before, and have not felt sick from having eaten all those portions that I have. (And, oh yes, during the meals, I also partake of Japanese alcoholic drinks -- be it sake or beer -- and have been none the worse for wear from doing so too!) In addition, I'll come out and say that last night at Sushi Shin, I had the most delicious as well as biggest botan shrimp I've ever had in my life (as well as quite a few other tasty treats, including mackerel sashimi which was served with shiso (perilla) and sesame seeds, and uni (sea urchin) and flounder sushi)!!

So, to say the least, I don't see any reason to stop eating Japanese food any time soon. Indeed, I feel like I might want to go and eat Japanese food more often than I normally do in part because I want to show my support for Japan in this time of crisis (and with trade and patronage rather than "just" aid!) as well as -- more selfishly -- because I don't want many of my favorite Japanese restaurants to close down any time soon! And, yes, I would like to urge like-minded supporters of Japan and fans of Japanese food to do the same wherever you are in the world!!!
Posted by YTSL at 10:32 PM

Go girl! I bumped into a women yesterday who started interrogating me about my kids school (they were in uniform), the minute they could after the earthquake they jumped onto the next plane with a suitcase and their family and left Tokyo for HK and were now trying to find schools, housing etc. etc.

I can't say I was terribly welcoming towards her. I don't really appreciate people who just take what they can from a country and then leave when the going gets tough. I think the same when HK had SARS....

Thanks for the support!

Re the woman you bumped into: have a feeling she's one of those who didn't want to go stay in Japan in the first place and/or maybe hasn't been there that long. Re the former type: alas, there are so many of them around... Re the latter possibility: I'm trying to be charitable... ;S

I'm not a big fan of squid but its presentation is lovely simple and elegant.

It's sad that people are avoiding the Japanese restaurants but lucky for you to be served complimentary food.

The lobster in the ramen bowl looks delicious.

I love squid for its smooth skin texture, general chewiness and also the little bumps on its tentacles! There's a "stick food" place in Mongkok that has grilled squid served with a nice sweet sauce. Next time you're in Hong Kong, I'll bring you there to see whether you might change your mind about squid after sampling that particular squid concoction. ;b

The lobster in the ramen was really hard to eat. Served in its shell, it makes for a nice presentation but would have preferred to have it shelled for me! :D

I love the presentations of Japanese food, but not as much enjoying eating them, as I'm a vegetarian.

I've not been to Japan, but do have some Japanese friends in KL, and one of them owns a Japanese restaurant here too. I hope all of them back home in Japan is coping well and rebuild their lives soonest possible. I try to help by joining groups of friends in street donations :)

And not only that I've put this on the wrong post. lol

Can see how being a vegetarian can limit your choices with regards to Japanese food -- but there's still all those great pickles (and maki rolls out of those pickles), vegetable tempura and various types of tofu...

Not to worry... and yes, I know about your jaz alter ego. ;D

Wow--the staff and owners of the Japanese restaurants must be devastated, particularly since there isn't anything they can do to counter the fear of Japanese fish and produce. It seems to be such a hysterical reaction to say that anything from Japan might be lethal.

Squid--yum! Fresh calamari, lightly breaded and deep fried for about 120 seconds, served with lemon and lime slices. Spirited discussions can occur regarding the "best" way to prep and cook squid, with strongly held positions among Spanish, northern Italian, southern Italian and other Mediterranean cooks (and consumers). Hard to go wrong with it, though.

I think the staff and owners of many of the Japanese restaurants are beyond devastated and reaching the point of despair. A waitress at another Japanese restaurant I visited recently told me that patronage at her eatery had gone down by 50% since the radiation leaks at Fukushima Dai-ichi -- and, she added, that's not so bad as at specialist sushi and sashimi places.

I really, really hope that my favorite Japanese restaurants aren't forced to close -- and thus am definitely doing my part to give them business these days!