Two 2011 HKIFF offerings with just one word each in their title :) 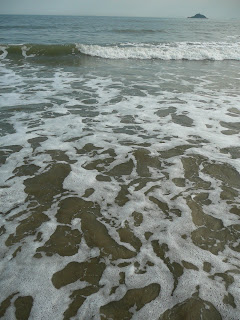 As one of the HKIFF offerings I recently took in
served to fully remind me, vast swathes
of planet Earth are covered by salt water
Part 1 of the 35th Hong Kong International Film Festival comes to an end today, April 5th. Since March 20th, I've taken in 21 of its offerings -- with 6 of those coming in the last 3 days alone. And yes, I've got tickets for Part 2 which begins this Friday, April 8th. But since there are far fewer films on offer in the far more modest second part of the fest, I won't be viewing films so regularly as I have these past two and a half weeks or so...

...which really is just as well as I have to admit to feeling a bit movie-ed out and now thinking that one function of my blogging about the films I've seen at the HKIFF is to get me recording down my thoughts of the works before they fade away or get meshed together with other films and experiences! So, without further ado, here's continuing with my reportage!!

As long term fans of Hong Kong cinema know full well, these are not good times for that which used to be the third largest film industry in the world not all that long ago. Thus it is that these days, one has to wait for years, even decades, before one can see a certain actor or actress's visage reappearing on the big screen.

Contrast these to the times when the likes of Andy Lau appeared in more than 10 movies in a single year. But even Mr Hardworking Lau's film numbers cannot compare with the stars of Family, the first box office hit that Union Film had; what with the likes of Ng Cho Fan having appeared in a whopping 318 movies in total and Cheung Ying having been in 402 movies!

Considering their numbers, I suppose that it is to be expected that Ng Cho Fan, Cheung Ying and others (including Tsi Lo Lin and Mui Yi) would be in both the Union Films I've seen at the HKIFF (and, actually, to date). Alternatively, I have to admit to being surprised at that versatility and ability -- in that, rather than essaying stock characters, their characters in Family generally have vastly different personalities from those that they played in In the Face of Demolition, another Union Film released in 1953.

For example, while Ng Cho Fan's In the Face of Demolition character had an admirable "can do" spirit, the man he plays in Family is one of the most passive movie person I've ever encountered -- especially given his position as the eldest grandson of a respected patriarch of a wealthy feudalistic family. And while Cheung Ying and Tsi Lo Lin's characters are romantically paired in Family like they were in In the Face of Demolition, this time around, their love is fated to not be due to his character's status as another of the patriarch's grandsons whereas she is a lowly maid in the family household.

In addition, if In the Face of Demolition's main characters embodied the "All for One and All for One" ethos espoused by the Union Film company, that of Family shows how a nominally unified group actually is full of people with opposing goals, dreams, wants and needs -- with different generations of unbiologically related folks appearing to have more in common than their family members of another generation.

A film adaptation of Ba Jin's novel showing how a Chinese feudalistic family came to destroy itself, this Ng Wui-helmed and -scripted work is rich in detail and in the 146 minutes that one views it, one feels like one has been immersed into this other world -- one that, alas, is not at all pleasant to be in. More specifically, the world of Family is full of such passivity and suppression that it caused a strong sense of frustration to well up in this viewer. At the same time, I do value the experience -- not least for giving me a good idea as to why some people would have so welcomed the Communist-led Chinese revolution and also the Cultural Revolution that we now know caused untold damage on Chinese culture and society and also the Chinese psyche.

Decades ago in Malaysia, I spent a number of years having to wake up at 6.30am to go to school (which began at 7.30am). Perhaps in reaction to those days, I am one of these people who most emphatically is not an early riser. Consequently, I eschewed attended those HKIFF screenings that began at 10.30am in favor of the later ones -- with one exception: that of the ecological documentary about oceans and the life in it that Jacques Perrin, Jacques Clauzard and Co took 4 years to make.

Seeing that Oceans was accorded a screening in the prime venue that is the Hong Kong Cultural Centre's 1,734-seat Grand Theatre, one knew that it was a movie with a large anticipated audience -- and so it was. But after viewing it, I also like to think that the France-Spain-Switzerland co-production's awesome visual beauty also played a part in the fest organisers' decision to have it play on the largest screen of the HKIFF's venues.

As those of us who love nature and being the great outdoors know, the earth has many incredible natural wonders and is full of sublime natural beauty -- and suffice to say that this documentary's team of cinematographers have successfully captured on film whole segments and scenes that give great visual testimony of this. In addition, they also have done a great job in showing the world -- and its oceans in particular -- to contain a far larger and wider variety of biological life than many of us can imagine, never mind realize.

Credit also to the film's makers for not shying away from showing us the uglier sides of nature -- including the destructive animals that human beings can be and, in fact, too often are. (In particular, the sight of a bloodied, de-finned shark fighting a losing struggle to survive after being thrown back into the ocean threatened to make me cry and despair.)

Kudos and thanks, meanwhile, go to the HKIFF's programmers for opting for the original French language version of the documentary rather than the Disney-fied version that sports a much criticized English voice-over by Pierce Brosnan. And on the aural front: here's also letting it be known that Oceans' sound mixers also did a superb job with the natural (and natural-sounding) sounds. (On the other hand, the music selection was not as inspiring as it could have been and, in fact, could be said to be pretty unmemorable.)

About the only misstep that the makers made -- and this is something that is particularly noticeable in light of the tsunamis that recently hit Japan -- was in a particular sequencing whereby after the narrator talks about how the oceans need to be protected, viewers get shown scenes of powerful waves doing such as splashing against weather-beaten rock faces and rising high to momentarily top a lighthouse seemingly precariously installed atop a lonely rock. But in the grand scheme of things, this surely is but a very small criticism of this largely amazing work indeed.

Hi YTSL! Sorry for being so silent during your HKIFF reportage (which I greatly appreciate). Work and my Putonghua class have been keeping me busy.

I've long wanted to see Family. It's available on DVD, but alas without subtitles. Are you going to see Spring and Autumn, the other films in the trilogy? Or perhaps that would be too much like actually being trapped in such an unhappy family! ;p

Good to get a comment again from you (hint, hint! ;b) Seriously though, am glad to learn -- even if belatedly -- that you have indeed been reading my 2011 HKIFF reportage. :)

Re "Family": your suspicions are correct -- think I'm going to give "Spring" and "Autumn" a miss! ;b

I should have skipped your review of "Oceans"--just reading about the dying shark made we wince so I can imagine how potentially upsetting it would have been in the theater.

We have just about given up watching nature documentaries because neither my wife nor I think that the inevitable dying animal that doesn't want to die and struggles to live scenes overshadow the other 98% of the film.

Yikes, my review of "Oceans" is not meant to put you off the film! In all honesty though, I don't think nature documentaries can *not* contain scenes of death -- as it is as much a part of nature and the cycle of life as the act of living, after all.

Also, I have to say that I appreciated the inclusion of humans into "Oceans"' picture because, among other things, humans are animals too -- albeit ones with disproportionate powers to harm but also protect.