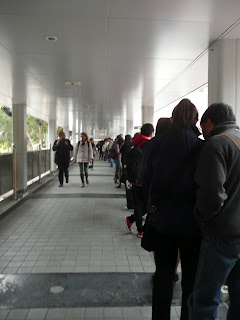 A familiar HKIFF sight: a waiting queue of film fans
at venues such as the HK Science Museum
As I write this, the 2011 Hong Kong Film Awards are taking place (and The Golden Rock, for one, is live blogging about them). But although my mind is on films this evening, it's not Hong Kong films from the last year or so but, instead, a couple of over 50 year old Japanese films that I viewed for the first time just this week at what is officially Part 2 of the 35th Hong Kong International Film Festival but can feel more like a mere addendum on account of such as its offerings being far smaller in number than Part 1.

Still, to judge from the two films I viewed this past Friday and Saturday, the portends are good that the quality will be good even if the quantity is lacking. Alternatively put, I liked both of these works so much I felt like I had to do my bit to spread the word about them so that should this blog's readers get their own chance to check them, they will want to go ahead and do just that! :b

Although one of his films (Modern People) screened at the Cannes Film Festival back in 1953, I think it's safe to say that Minoru Shibuya (or Shibuya Minoru -- if you opt for the traditional surname first, personal name second order that would make it so that Akira Kurosawa is Kurosawa Akira) is not one of the better known Japanese filmmakers outside of his home country. (And, yes, I do reckon that it's pretty telling that his Wikipedia entry is one of the paltriest I have ever seen for a respected director, particularly one with over 40 films to his credit.)

For my part, I don't think I had even heard of Minoru Shibuya prior to checking out the 35th HKIFF's program booklet and finding an eight film retrospective programme dedicated to the Shochiku filmmaker who lived between the years 1907 and 1980, and was particularly active professionally 1937 and 1965. So I did feel like I was taking a chance when I decided to get tickets to two screenings of his movies on the face of their description in that booklet.

Doctor's Day Off had been billed as a "tragicomic melodrama... considered a highpoint in Shibuya Minoru's ouevre". But although this offering revolving around a hard-working and caring doctor who cannot turn patients away even on his day off -- and, in one instance, despite having had too much to drink -- does have its sad elements (including a rape victim and a war veteran made mad by his military experience), I came away from the viewing experience with a much lighter heart than I thought I would based on that mentioned description.

For one thing, the film's affable doctor main character regularly breaks out into the kind of laughter that isn't only infectious but makes those who hear it liable to feel that things really aren't that bad with the world. For another, the movie (whose events actually unfold over more than just one day) is filled with a number of good-hearted and good-natured people whose willingness to help others -- strangers in town as well as colleagues and close neighbors -- is really heartwarming as well as admirable; with the doctor's first patient at the hospital he opened 18 years ago coming very close to topping the physician's in term of colorfulness along with good-heartedness.

Made as it was less than a decade after the end of the Second World War, Doctor's Day Off comes across as an affirmation and testament that while Japan undoubtedly was (still) scarred from the war (its demands of the people throughout the war years as well as the final defeat itself), it was also slowly but surely healing through the efforts of good people like those who populate this movie. So even while the Japan depicted in the movie was a good deal more ramshackle and poorer looking than what we have come to be used to seeing (at least pre March 11 tsunami), there definitely was a sense that the future was something that one could see being bright and, also, that a more humane society already was being built in place of the more conservative and militaristic one that had been there before it.

After viewing the Doctor's Day Off, I was eager to check out more films by Minoru Shibuya and as luck would have it, another Minoru Shibuya film was indeed on the schedule the day after.
Made nine years after the first movie by the director that I had viewed, A Good Man, A Good Day benefits from technical improvements -- on the part of the filmmaker but probably the Japanese film industry as a whole -- in the time in between.

Furthermore, this work appears to have had a larger budget. And I definitely do feel that the movie benefited quite a bit from not only being shot in color (rather than Doctor's Day Off black and white) but, also, having location shots that set it squarely in Nara -- whose magnificent Todaiji Temple and deer-filled Nara Park (both of which I visited decades ago) prominently figure in the offering.

In many other ways, however, A Good Man, A Good Day and Doctor's Day Off have so much in common that it really would be hard for anyone who's viewed them both to not think that they were made by the same filmmaker. Indeed, the two films' main themes are so similar that... let's put it this way... the title of "A Good Man, A Good Day" would have worked for both -- rather than just one of -- them!

This time around, the good man in question is an eccentric genius of a math professor with a wife and daughter who love him dearly. Although highly respected and clearly very accomplished in his chosen field, he -- who gets invited to teach at Princeton University and becomes quite the celebrity after he is awarded a prestigious medal by the Emperor -- can act more like a willful child (albeit one who's addicted to caffeine and nicotine) than mature adult with familial responsibilities. At the same time though, he does show often enough in the movie that he actually is a caring man who is deeply grateful to his wife for all that she has done for him over the years and a sensitive father who wishes very much for his daughter to be happy.

When viewing this film, I found myself breaking into smiles very often. To be sure, there were many times when this was the case because something that happened on screen made me happy and glad. However, there also were times when I smiled very broadly -- and also broke out into laughter -- because the segment I had witnessed had amused or been downright funny. (Prize scenes and sequences include one involving the professor getting called an old fart by the young man his daughter wishes to marry and another in which his wife and a good friend openly talk with amusement about him.)

For even while, like with Doctor's Day Off, the film contains references to the second world war (and in a way that clearly shows the director considering jingoism to be an absurd way of viewing the world) and also the poverty that many Japanese people were saddled with in the post-war years, A Good Man, A Good Day is clearly a good-natured comedy -- full of good-hearted people whose admirable way of dealing with life's harder parts including doing so with a smile and/or seeing the funny side of it.

After watching these two of his films, I have to admit to thinking that Minoru Shibuya couldn't have been anything other than a good and warm-hearted man because both his Doctor's Day Off and A Good Man, A Good Day so consistently evince a gently as well as generously positive view of humanity -- one that leaves this viewer, at least, feeling as though bathed in a warm glow and convinced that seemingly little acts of humanity really can mean and count for so much.

Yay! I was hoping you'd review one of Shibuya Minoru's films. If I lived in HK, I would definitely have watched the whole series of his films. Just reading the descriptions, I could tell they'd be right up my alley.

After reading about how much you loved his good-natured comedies, I'm very curious now about his darker, satirical works like Modern People and The Days of Evil Women.

Anyway, this sounds exactly like the kind of series that would play at the Pacific Film Archive in Berkeley. I'll keep my fingers crossed that it travels to my neighborhood some day soon.

BTW, did you see any of the puppet films by Kawamoto Kihachiro? I seem to remember you reviewed one of his works several years and really liked it.

So you knew about Minoru Shibuya before this post? If so, which of his films -- of any -- have you seen?

As for te Kihachiro Kawamoto films: yeah, you're right in that I watched and reviewed "The Book of the Dead" some years back. Didn't catch any of his films this year, alas. There were tons of screening clashes -- in particular, there was one slot with about seven movies I wanted to see!!! ;(

Hi YTSL! I just knew about his films from the HKIFF schedule. Before that I'd never heard of him.

Seven want-see films for one time slot -- aiyaa! That sounds a little frustrating, but on a positive note, it's strong proof of what a great festival HKIFF is. ;)

Yeah, when I first glanced at the offerings for this year's HKIFF, I thought it wasn't a particularly special year. (No Brigitte movies, for example!) But I think that I ended up not doing too badly in terms of what I got to view! :)