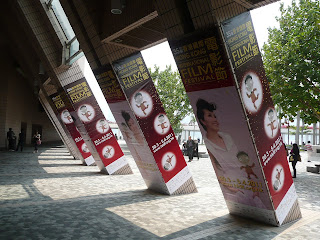 2011 HKIFF advertising -- featuring festival
ambassador Miriam Yeung and mascot Puppet-kid
With this blog entry, my coverage of the 35th Hong Kong International Film Festival comes to a close. Beginning with Carlos on the afternoon of March 20th, I viewed a grand total of 21 films at this year's film fest (all of which I will have reviewed in 12 blog posts over the past three weeks or so -- all (not including this one for now!) of which I'm happy to say have attracted a fair amount of comments -- thanks to those who gave me proof that people have been indeed reading these entries!).

And for the record: I really did pay for all the tickets to the screenings out of my own pocket -- and have no media or other official affiliation with this fest that I've come to not be a fan of in a professional capacity but still very much love in my leisure hours!

Three years ago, I viewed Jose Padilha's Elite Squad. The 2008 Brazilian winner of the Berlin Film Festival's Golden Bear as well as a multi-award winner at the Brazilian equivalent of the Oscars actually didn't impress me all that much at the time -- and in the records I keep of films I watch, I rather dismissively described it as a "[s]implistic, crude and violent action[er]" even while conceding that it "nonetheless is undeniably engrossing to watch".

In the years since, however, I have come to hold a more positive opinion about the crime drama which sees an elite police squad (known as "BOPE" for short after the initials of the Portuguese Portuguese equivalent of "Special Police Operations Battalion") wage a no-holds barred war against drug dealers and associated criminals in Rio de Janiero; not because I re-watched it again but, rather, due to certain memories of the film having lingered longer and more vividly than I thought anything from the effort would.

So I was very excited to see Jose Padilha's follow-up film getting its Asian premiere at this year's Hong Kong International Film Festival -- and, of course, made it a point to get a ticket to one of the film's two screenings at the fest. (More than incidentally, I really felt like I was in Movie Mecca when, at the screening I attended, I found myself sitting just two seats away from Teddy Robin Kwan... aaah, Hong Kong, where one doesn't only get to see cool movies but is liable to have these cool chance spottings of celebrities one admires and/or respects!)

Getting back to Elite Squad 2: the 2010 follow up film largely takes place 13 years after the events of the first Elite Squad. Some flashbacks help get the viewer up to speed with the latest events and developments -- one which sees BOPE's Lieutanant-Colonel Nascimento (Wagner Moura) now a government under-secretary, his former BOPE lieutanant (Andre Ramiro) disgraced and demoted, and their biggest enemy now being corrupt policemen who have become de facto militia kingpins who have whole communities under their thumb and at their mercy.

This time around, there is less brutal action on view but no less of an adrenaline rush when viewing this movie that doesn't lack for plot twists, complex plotting and intriguing characters -- and a pulsating soundtrack that keeps things feeling energized, even when the movie pauses to have characters offer up whole lines of expository dialogue -- be it on screen or via a reflexive narrative voice-over.

And whereas I found the first Elite Squad to espouse a simplistic, close to fascistic "the ends justify the means" point of view, Elite Squad 2 really does feel more admirably complex in terms of the opinions that are tendered in the film as well as in its story-telling. For one thing, the protagonist (who still is referred to as Colonel Nascimento even after he ceases to wear the uniform and skulled badge of BOPE) is now able to take a wider view of things, including one that reaches back several years in order for him to pinpoint where certain things starting going wrong and such.

For another, even while Wagner Moura owns the screen whenever he's on it, the film has some other interesting characters -- notably liberal activist turned legislator Diogo Frava (Irandhir Santos)... who just happens to have married Nascimento's ex-wife and now is co-raising Nascimento's son along with his spouse! And while this kind of twist can seem soap operatic, it actually does help the film -- and, of course, increase tensions -- that Nascimento doesn't just take his work personally but actually ends up having personal reasons to go after the bad guys.

A friend and I were talking earlier today about our respective 2011 HKIFF experiences. Interestingly, we had not seen a single film in common -- despite her having viewed 16 movies and I 21; a state of affairs that got me recalling David Bordwell's observations about an earlier HKIFF and how it can feel as though "you [and your friend have] both been in the same town, and probably hit the same venues, but you've been to different festivals".

This friend also shared that the last work she had viewed at the 2011 HKIFF had not been great -- and how disappointed she felt that her personal HKIFF-ing had not ended on a high note. To which I replied that I can relate... for even while the final film I saw of this year's Hong Kong International Film Festival -- or, at least, its mega part 1 -- was actually okay, the fact of the matter is that it sadly lacked the adrenaline rush and high of Elite Squad 2.

Instead, A Crying Man is a generally languid work about a middle-aged African man trying to do generally mundane things like hold on to a job he loves while living in increasingly desperate times. Modest in scope and feel, its protagonist is a former Central African swimming champion who has worked for decades now as a pool attendant at a plush -- by African standards -- hotel now managed by a French-speaking Chinese woman. Taking no small amount of pride in being his country's first ever pool attendant, he has brought his son in to be his assistant.

As times get rough though, some workers get let off and the man popularly known as "Champ" (but whose first name, we also learn, is Adam) finds himself coming up against his son in a battle for the pool attendant job. What he proceeds to do -- or not do -- in the days after he learns about this development is something that will come to haunt him and cause him a significant amount of pain and remorse.

A study in understatement, A Screaming Man is one film in which screams tend to be silent but are perhaps even more heart-wrenching because they are not heard by others for the most part. On an associated note: quite a few significant developments largely happen off screen or internally -- though, and here I'll credit helmer Mahamat-Saleh Haroun, much does get realized and understood.

Stylistically, things are on the minimalist side as well. For example, the singer-girlfriend of Adam's son is never heard singing with a band or any instrument accompaniment, only a cappella. Additionally, the cinematography is so restrained that it's only after a shot lingers for several seconds on screen that the viewer is liable to realize that it is indeed beautiful or consumately composed.

In theory, all this is well and good. And I must say that I did come away from the screening with much respect for the film's maker. At the same time, I must admit to wishing for some (more) "oomph" and "pizazz" to the work -- so that I could come away not only respecting the restrained effort but possessing more emotional reactions to the sad and bitter story that unfolded within it.

Only 21 films? Come on. I thought you were a passionate film goer! Next year I think you need to aim for 30! Again thanks for bringing lots of films to our attention. I'll have to see if I can get a hold of the 2 Elite Squad films, the long version of Carlos and finally watch my dvd of Love Letters. The Union films I expect will not likley ever surface on dvd. Do you know any other Blogs that covered the HKIFF?

Sorry I am not into movies. Before I had children, I worked for a Kerridge Odeon company which owned hladf the cinemas in NZ. There were 10 in Auckland. We watched movies for free. After that, I said I watched enough movies to last a life time.

I didn't know about rambutans in Tanzania. Has a refugee student whi will be returning there for a holiday. i must show her my photo and ask her to look for it .

Did you go to Tanzania?

"Only" 21 films!!! Let's see how many films *you* view next year (especially since your total this year is a big fat goose egg)!!!

More seriously, am glad I managed to interest you in *some* films. As for other blogs that cover the HKIFF: there's David Bordwell's blog and also the Hong Kong Culture Vulture whose blog I've newly added to my blog roll...

To think you used to work for a cinema chain and yet are not into movies... alas! ;(

Re Tanzania: I lived there for two years. That's how I know about rambutans there (especially in the Zanzibar Islands) and durians -- wich they call duriani -- too. :)

Enjoyed the first one, though not too sure if the sequel would make it here due to the modest box office receipts.

I was intrigued by your review of Elite Squad 2 and comments about the first Elite Squad that I rented the latter. I didn't think it was a great movie but I did spend and enjoyable evening watching it. Thanks for your review.

Sounds like you'll want to watch "Elite Squad 2" at some point too then! :)