Yet another 2011 HKIFF Report (The dark edition) 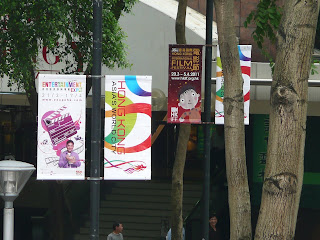 Some of the colorful banners that can be seen about
Asia's World City around this time of the year
I'm listening to music from a Leslie Cheung CD as I write this entry. And yes, this time of the year, it's hard to not be aware -- especially if you're a fan of Leslie and/or living in Hong Kong -- that April 1st (which fell yesterday this year) is his death anniversary. As it so happens, this year, among the memorial events the folks of Red Mission have organized are two screenings of Days of Being Wild. So it feels really ironic as well as sad to learn that the film's producer, Alan Tang, passed away earlier this week.

Even while their premature deaths are mourned, however, their work -- and the appreciation of them -- remain very much alive -- in large part via the magic of movies (as well as, in Leslie's case, through his music). And it's also true enough that events such as the Hong Kong International Film Festival provide ample proof that films really have the power to connect people and make them think and feel as well as "just" entertain...

The only offering from the U.S.A. on my 2011 HKIFF viewing list is an Oscar winner -- albeit in one of the Academy Awards' less glamorous category: that of feature-length documentary. And the last time I looked, there were close to two hundred reviews in the Charles Ferguson's film on the Internet Movie Data Base including by the likes of the Chicago Sun-Times' Roger Ebert, New York Times' A. O. Scott and Village Voice's J. Hoberman.

In all honesty, a very big part of me very much doubts that I'll be able to add all that much (especially quality wise) to their thoughts about this work whose viewing had been described in the HKIFF programme booklet as guaranteed to leave one angry and upset -- presumably with the people and companies that were supposed to be pillars of the establishment but turn out to have been disreputable gits who have ruined many innocent people's lives.

As it turns out though, I actually wasn't left boiling with rage by my viewing of Inside Job -- but, then, maybe it's because I've long not had much trust nor respect for those individuals out there who really do seem to believe Gordon Gekko's assertion that "Greed... is good. Greed is right. Greed works".

Alternatively, the documentary did leave me feeling really sad -- not least about the great economic disparity that exists in the world; one that the film well illustrated by showing one of the disgraced financial companies whose "work" helped trigger the 2008 world financial crisis having had several private planes (including a 767) at its disposal and quite a few of the senior executives having made several millions of (American) dollars despite losing their companies and their clients several hundred millions more (US) dollars... and then having a segment in which a Chinese migrant worker spoke about how she had moved to the city because there, she could find higher paying jobs -- jobs that paid her US$60 a month.

But while I felt that this work was excellent in its coverage and analysis of what had transpired, it is disappointingly short of solutions for remedying a situation that it clearly has shown should not go on. Put another way: what we seem to be left with are people to blame but few, if any, people who have been identified as being able to clean up the mess and lead the world to a better, healthier economic plain and/or set up -- least of all the man who campaigned on a "Yes we can" promise that is looking more and more to be mere slogan rather than something real and substantive.

What is it with Koreans and revenge movies? To be sure, I do know that South Korean cinema has excellent films in many other genres -- and I've seen a number of them (including Peppermint Candy, Joint Security Area and My Sassy Girl) -- but there's also no denying that some of the most high profile movies out of South Korea in recent years have been revenge movies... and that Kim Jee Won's masterful I Saw the Devil may actually have topped Park Chan Wook's Vengeance trilogy in terms of violence and villainy!

I Saw the Devil begins innocously with mellow music that one soon realizes is being played in a car being driven one snowy winter's evening by a woman celebrating her birthday that day. At some point in her journey though, her vehicle develops car trouble and she has to wait for a tow truck to help her out of what she envisages as but a temporary predicament. While waiting for help to arrive, she chats on a mobile phone with her husband (who the audience soon learns is a special agent heading a detail that guards a senior government official -- possibly the country's president).

While she's on the phone with her husband, another man approaches her car. He offers her help but she rejects him, saying she prefers to wait for the tow truck to arrive. Quickly, it is established that her inclination to be wary of him is the right instinct to have vis a vis him. Unfortunately, however, it still does not save her from a terrible fate -- one that both her retired policeman father as well as her husband discover along with hundreds of others by a river not long afterwards.

After his beloved wife's death, the secret agent determines to discover his wife's murderer and make him pay for his not having killed her but inflicted a horrendous amount of agony and pain on her along the way. The former he manages to do very quickly. With regards to the latter: That is something that is left in doubt for much of the movie -- that turns out to have a lot more plot twists (some more unpredictable than others) along with overall quality than your garden variety revenge film.

The way I see it, I Saw the Devil would have been better served if it had had one or two fewer twists. (And it does seem to be a recurring complaint on my part re South Korean films that they don't seem to know when it's time to end. In particular, they regularly appear to have unnecessary post scripts attached to the main story in the form of one needless final twist to the often already quite complex, if not convoluted, tale.)

At the same time, however, the added twists meant extra screen time for Lee Byung Hun and Choi Min Sik, the film's two stars who both turn in bravura performances that confirm their acting chops and powerful screen presence. Lee Byung Hun is particularly exceptional in a couple of scenes during which the sound is muted and his expressive face is the visual focus. And it's actually a great testimony of Choi Min Sik as a thespian that his performance in the film left me thoroughly chilled as well as horrified by his character's general lack of remorse along with his immorality and sheer despicability.

I found I saw the devil to be disappointing, not because of the films quality, its excellent in almost every respect except I just couldn't get past the implausibility of letting Choi Min Sik go each time.

Did you find it practically or emotionally implausible that the Choi Min Sik character so many times?

*Spoiler alert* Re the former: he had that tracking device put inside of him, so it wasn't really let go -- just allowed a longer than normal leash. As for the latter: I guess the thinking behind it was that it would prolong his agony and also strengthen his sense of being the hunted versus hunter. *end spoilers*

In any event, I just went as far as I could with the story flow -- only tiring and wishing it all would come to an end near the end. *Another spoiler alert* For me, actually, what was more implausible was that successful seizing of him in front of all those cops that he was intent on surrendering to! *end spoilers*

More emotionally really, knowing that letting him go he would inflict more pain on others, leaving them to suffer in the same way he already has.

I will give it another go when the blu ray is released as its such a beautiful looking film.

And yeah, it is a beautifully shot film. So am glad to have been able to see it on a super big screen at the Hong Kong Cultural Centre's Grand Theatre. :)

A flood of movie reviews from YTSL is a real treat whether she writes of movies I have seen, will only be able to watch on a bootleg disc or somewhere in between these extremes. That her recommendations are always right (for me) isn't the most important point since that might be just an accident of taste. The best things about her reviews is simply that YTSL is a very talented movie critic. While she writes well all of the time I feel some of her best work is triggered by film.

I enjoyed "Inside Job" although I was familiar with most of what Ferguson covered, having been employed for years in an industry that is ancillary to (and much less well paid than) financial services.

Ferguson must have been thrilled when he first realized how Larry Summers would look on film--he kept showing up, looking more and more jowly as time went on. Summers looks like a figure from Bosch, perhaps a devil using a pitchfork to shove some damned souls into Hell.

Nouriel Roubini came across brilliantly as he should have since he had been predicting the 2008 crash for a couple of years--his nickname was Dr. Doom. He is also one of the few if not the only academic economists who came across as intelligent and thoughtful. The rest of them are exactly as portrayed--unscrupulous and and unable to deal with any challenge to their authority as "experts".

It makes sense that Ferguson would be unimpressed by academics--he has a Ph.D. in political science from MIT, has had his ticket punched in a lot of top universities and was a Brookings Institute fellow.

He also did a decent job of explaining credit default swaps and collateralized debt obligations.

Woah and *blush* re the compliments in your first paragraph. Actually, I wish I could have it framed and use it for reference for film reviewer job applications! :D

Seriously though, thanks much and I'm glad that you find my reviews to be worth reading. Having a blog find an audience is a delight -- an appreciative one even more so. :)

Also thanks for sharing your thoughts re "Inside Job" -- and definitely agree with your view of Larry Summers (a man who particularly came to my notice when he became a most unpopular president at Harvard). Re many of the big earners one sees in the film: one really wonders how they got into the positions that they did -- their abilities and intelligence seem very much in doubt, after all... that is bar for the ability to look arrogant. I mean, heck, they can't even project an image of being trustworthy!