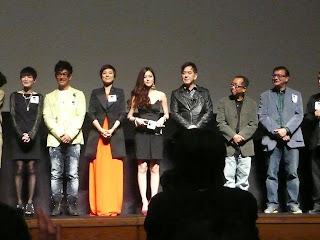 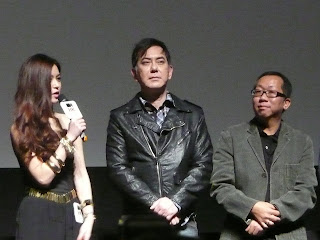 A more close-up shot of the trio of (from left to right)
Janice Man, Anthony Wong Chau San and Lo Wing Cheong
Although Part I (i.e., the main part) of the 35th Hong Kong International Film Festival concluded this past Tuesday, the HKIFF reportage continues on this blog! Before I commence writing about another two movies I viewed between March 20th and April 5th, however, here's letting interested readers know that Part II begins this Friday -- and that I've already got tickets to a few of this upcoming programme's screenings... ;b

When I lived in Dar es Salaam back in the mid 1990s, I used to go to an Italian restaurant there named La Dolce Vita. And here in Hong Kong, there's another Italian eatery with the same name. Although the phrase is a really nice one (seeing as it translates into English as either "the sweet life" or "the good life"), I can't help but think that one factor behind those dining establishments being named as such is because Federico Fellini's famous film made La Dolce Vita such a well known catchphrase.

So imagine my surprise to find -- upon my viewing this 1960 movie for the first time ever just a few days ago -- that it actually is not the cheerful, uplifting film that its title can make it seem to be. For even while its protagonist, a dashing gossip columnist named Marcello (played with no small degree of charm by the very watchable Marcello Mastroianni) leads a life that allows him to rub shoulders with the wealthy, famous and/or noble titled (and thus may seem glamorous and fun to outsiders), his actual lot is one that seems to lead a thinking man like him to frustration, if not outright or psychological ruin.

Granted that early on in this richly detailed work, especially in those segments where he's seen having an apparently fine old time with two attractive women in the form of a rich society beauty (portrayed by Anouk Aimee) and a sexy actress (essayed by Anita Ekberg), Marcello does indeed appear to have a pretty sweet and good life. Alternatively, the sections of La Dolce Vita in which the main character's jealous girlfriend, intellectual friend Steiner and father prominently figure do cast doubts and shadows over proceedings and the protagonist's life.

One problem is that even while Marcello battles hard against his girlfriend to not be stifled in the kind of domesticity she seeks but he reckons would be boring, he has allowed himself to venture along a professional path that is far from the intellectual world that he wishes he could permanently be a part of. At the same time, however, when the film's viewers are shown into that world, Fellini looked to have shown it to be ultimately as emotionally empty and unsatisfying as the other milieux that Marcello is obliged to venture into and spend time in over the course of his work.

Consequently, the further one goes into what can come across as a cautionary life tale, the more the protagonist's lot changes from one that seems to be the stuff of fantasy to one that could be described to be a hollow shell, and maybe even a living nightmare. If truth be told, I'd have preferred for a 167 minute work to have ended on a higher note than La Dolce Vita did. However, this is more a personal opinion than genuine criticism of this an undeniably enthralling masterwork of cinema -- one which is filled with lots of striking images and creatively conceived segments that will undoubtedly linger long in this viewer's memory.

My rating of this film: 9

First it was Carrie Ng and Pat Ha. This Monday evening, it was Anthony Wong Chau San and co. So I have to say that this year's Hong Kong International Film Festival has most definitely delivered in terms of celebrity appearances that please a Hong Kong film fangirl like myself!

Ironically, however, the 2011 HKIFF turns out to not have been that great for Hong Kong cinema as a whole. For one thing, this year's Hong Kong Panorama may have been its smallest ever -- with only six films in the programme. For another, none of the Hong Kong movies I have seen at this film fest have greatly enthralled -- and yes, alas, I include here this Milkyway Image production whose tale of vengeance sorely lacks the nihilistic intensity and emotional depth of, say, South Korea's I Saw the Devil.

Lest it be thought otherwise, this crime drama's star definitely doesn't deserve any blame for this -- and, in fact, Anthony Wong turns in an admirable performance as a man who is used to controlling circumstances and other people, so is liable to snap when situations spiral out of his control and/or people don't (re)act in the way he wants them to. Additionally, while he has his detractors, I thought that Richie Jen put in a good performance as the man that Anthony Wong's tycoon character turns to for help after his daughter is kidnapped and to do the dirty work demanded by the tycoon after his dealings with his daughter's kidnappers don't go as hoped and planned.

Where I will point a finger though is at the script, and its characterizations of two key individuals in the story. The first of these is the daughter (played as a young adult by Janice Man) who comes across as so devoid of virtues that it's hard to believe that even her father could actually still truly love her. The second of these is the chief kidnapper whose motive for wanting the woman he kidnapped dead comes across as just not strong enough to risk the expected wrath and furious repercussions that would follow from committing such an act.

Put another way: Since the script didn't give me enough reason to care for the kidnap victim and sufficient understanding of the main villain's thinking, I just didn't feel that emotionally invested in the movie's proceedings. Consequently, when I saw people being punished in the film, I generally did not feel much empathy for them and what they were going through.

The one exception came, however, in the movie's climactic scene -- and involved a character that had hitherto not appeared to be someone who was all that important to the story. All in all, I consider it to be Punished's redemptive as well as strongest section. And, looking on the bright side, at least it allowed the work to end on a high rather than low note!

Not a fan of Italian cinema in general and certainly not a fan of Marcello M. (whose talent is obvious but his looks do not have the same impact on me as they do on the majority of the women in the world) this film bored me after one hour. I'll give this confirmed master work of cinema another try though now that you also recommend it.

And I'm looking forward to Punished. I do love Anthony Wong and he looked so good in the photos :)

Thanks for the Anthony Wong update. I like him a lot. (I very much enjoyed his performance in the Heaven Sword and Dragon Saber TV series.)

I have a feeling that you'd like the later parts of "La Dolce Vita" more than the first hour or so of it -- which seems fluffy in comparison to what comes later. Also, it is one of those films that's magnificent on a big screen -- did you watch it on home video?

Re "Punished": I think you'll be okay with it -- seeing that Anthony Wong is its star and does a good job in it. :)

Anthony Wong Chau San most certainly does have his share of fans, doesn't he? And yeah, have to say that seeing him, Carrie Ng and Pat Ha in person -- and having Teddy Robin Kwan sit two seats away from me on another occasion -- made for some of this year's HKIFF highlights for me! :b

Hi YTSL, Really looking forward to Punished, despite your luke warm review, and I'm sure Anthony Wong will look that cool into his 80's!

Maybe I'll have lowered your expectations sufficiently that you'll be pleasantly surprised by "Punished"! And re Anthony Wong: have to say that the contrast between his cool leather-jacketed appearance and more Establishment look in the film is quite something! :D

"La Dolce Vita" is a marvelous film. And very good. Anita Ekberg and Anouk Aime are women who entrance and are atractive. Roma is the real star of the film.

I am looking forward to Punished! :D Hope it makes it here at least.

Don't Go Breaking My Heart is showing here with the original language track intact, yes that smattering of Cantonese and Mandarin, which in the past would have had to be dubbed into 100% Mandarin.

I am hopeful, one day, one day!

I dusted off my Italian/English dictionary and found my "501 Italian verbs" so what I wrote might well be the directions from the Spanish Steps to the Vatican Museum or perhaps a can't miss recipe for linguine with clam sauce.

The last sentence is (or might be) "I love Italian cinema--actually I love all cinema."

More to the point, I am often surprised when a real film aficionado hasn't seen a movie like "La Dolce Vita" but then I realize that I haven't seen, for example, "On the Waterfront", "Paths of Glory" or anything by Goddard other than "Breathless". Lots of movies still to see.

Keep your expectations low re "Punished" and then maybe you'll like to more than me!

Re the dubbing of Cantonese into Mandarin when shown in Singapore: find it really unfair... especially since Singapore (now) allows dialects in its own movies -- e.g., "When Hainan Meets Teochew"! :S

If you're counting, I've seen "On he Waterfront" and more movies by Goddard than just "Breathless"... ;b

But re classics: well, my thing is I often like to wait until I can see a movie on a big screen... and since I know that there's a better chance than most of this happening in Hong Kong... Already, since moving here, I've gotten to see a number of Eisensteins and Mizoguchis, tons of Edward Yangs, etc.

The other things is that some films considered by classics by others don't seem to stand the test of time for me -- with a number of Hollywood movies being that way for me (e.g., "The African Queen" and "The Country Girl"). So there are times when I think maybe I should let them go or just wait for opportunities to view them fall on my lap rather than hunt for them... :S

Yes there's something against Cantonese here, not sure why... but if it's any indication of a loosening up of these silly unwritten rules, the Malaysian film "Lelio Popo" had its predominantly Cantonese track left intact as well... so slowly but surely, I'd say :)

Hmmm... is it a bias against Cantonese or Hong Kong films, I wonder? It really is sad that Hong Kong films seem to be the only films that get required to be shown dubbed in Singapore! :(