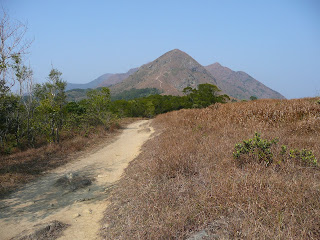 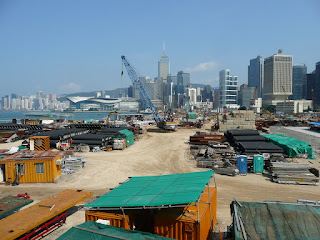 Talk about showing two different sides of Hong Kong in a single blog entry but this week's Photo Hunt theme has given me the opportunity to do precisely that! In that here's offering up two photos of Hong Kong featuring a dusty dirt trail in Ma On Shan Country Park and a dusty mega-construction site right in urban Hong Kong.

More re the first photo: Hong Kong gets a considerable amount of rainfall in a year (with its driest area getting 1,300 milimeters (approximately 51 inches) and its wettest area more than 3,000 milimeters (approximately 118 inches) of rain over a year) but what can be even more striking is that some 80% of the rain falls over just 5 months of a calendar year (between May and September). Consequently, fall and winter regularly offer up several optimal hiking weather days in terms of their being dry as well as cool. (I'm actually personally okay hiking on hot days with temperatures in the high 30s on the Celsius and Centigrade temperature scales but I draw the line at going hiking on rainy days.)

Re the second photo: One of the more striking things about the Big Lychee for visitors is how much construction is going on in the city at any one time. On a related note, very little of this construction is taking place on "pristine" sites. Rather, older buildings get torn down and newer buildings -- that are invariably bigger and taller -- get built in their place or, as is the case in the photo that actually dates back to 2009 (so the scene's quite different there now), land gets reclaimed from bodies of water such as Victoria Harbour and built on.

The result of all this construction, reclamation and destruction is that the physical landscape of Asia's World City is noticeably ever changing -- with quite a few places I counted as landmarks in previous years now being no more... including the more conveniently located Star Ferry Terminal in Central that I used on many visits to Hong Kong and Queen's Pier, both of which used to stand within the area covered by the above dusty construction site photo.

It looks interesting dusty road. Good choice for the theme...Mine is up.

homg kong, like mumbai, is a city of 'work in ptogress'!

Two sides of the dusty coin. I meant to take a photo of a constructions site not too far from us as well but forgot. So I have but one side.

It always bothers me to see cities encroaching more and more over their shorelines. I know that cities have long done this (London, England for example) but when we continue doing it it makes the cities more and more cramped (London, again, for example).

In the case of London, you have old buildings sitting beside modern skyscrapers and being built further and further out onto artificial shorelines. It is sad. I realize that some cities (Hong Kong, of course, being one) have little choice. But where you do, it should be just the opposite. Reclaim the river from the land, not the other way around.

There are many ongoing construction projects in Penang too but didn't manage to take any photos.

Gosh, I wonder what will a real sandstorm be like? There was definitely some sand blowing in Dubai but was probably mild compared to the violent ones that you've had experienced. I could even feel the tiny sand particles hitting my face and clothes. yikes, not a nice feeling at all.

I can almost taste the dust...

It's more a trail than a road -- i.e., the ways up are just too steep for cars and it's really only used by hikers. :)

Think you've got that right!

Wow, if you had done what you had meant to do, then we would have had mirror entries in Canada and Hong Kong! :b

To be honest, land reclamation from bodies of water don't upset me as much as seeing hills beng levelled in order to turn them into more build-able land. In any event, it sure does seem like we humans sure do like to physically change landscapes -- and often for worse rather than better. :S

There may be many construction projects in Penang but trust me when I say that their number is small compared to Hong Kong! Some parts of Penang seem like they haven't changed in decades whereas it's hard to say that about much of Hong Kong...

Fortunately, it's not that bad! Though after some hikes, I can definitely feel the dust mixed into my hair! :b

Love the dusty trail in the first photo.

thx for the drop in. I miss HK,esp Stanley Market. lol

which publication r u editing for?

FIlm buff eh? check out this short film I came across on my blog. DIARY. previous entry. u might like it.

Great contrast in the two shots this week. I would probably head for the area of the first shot were I in Hong Kong. I can identify with the construction as we have a lot of that here. Not so much tearing down old buildings but street corners that used to have a restful stand of trees, now have yet another building. Happy weekend.

Nice to look at... difficult to hike though! ;b

Stanley Market? Really??? (I like Stanley but the market is not exactly my favorite part of it!)

Er... don't want to spell out the name of the publication I edit for but you probably could make a good guess! ;b

FYI, the area in the first shot is known as the Ngong Ping Plateau (same name as a more famous plateau on Lantau but significantly more difficult to get to and also (consequently) more peaceful).

And hmmm re the street corners being built up on in your area... OTOH, it sounds like better economic times have come to you area than most others in the US. So it's not all bad, right?

Great post as usual. Perfect shots for the dusty theme. Thanks for coming by to see mine.

Hi YTSL, I'm a cool rather that warm weather outdoors person, but we are in total agreement about avoiding the wet stuff. :) What contrasting photos, one dusty road that leads to mountains, the other to skyscrapers. Very interesting read ...

Two very different types of scene, but both work so well for the dusty theme :)

Living in a city, ongoing construction projects are a headaches to residents. I have been inconvenienced by them for 8 years!! I'm going deaf.

Thanks for coming over and reading as well as looking. :)

Actually, I prefer hiking in cool weather too -- even while knowing I deal with hot weather better than many others. (Some people in Hong Kong stop hiking in summer -- I continue... so long as it's not raining on my designated hike days!) :)

Eight years? So has the amount of construction exponentially increased in Singapore over the past 8 years? :O

I forget that it counts as dust even when it's outside. And yeah, the differences in the shots is all the more interesting. Great take on the theme.

Yeah, it's dust all right even when outside -- have been on too many a dirt road in East Africa where I've had to cover my nose with a bandanna cowboy style to not forget that! ;b

Interesting contrast between these two dusty views. Hope you had a great weekend.

Thanks and yeah, I had a pretty good weekend... even with my favorite soccer team losing. Four movies and a great hike saw to that! :b