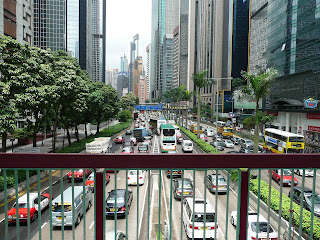 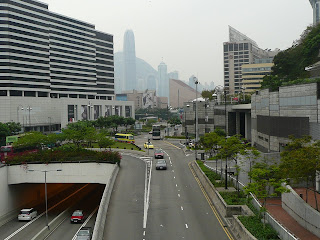 "Hong Kong's roads are among the most heavily used in the world." So goes the opening line on a page on the Hong Kong road network on the Highways Department's website. And when looking at the above photo of a jammed Gloucester Road, few would disagree with that statement.

With a limited amount of land and space to place the roads along with other human-made structures that are part and parcel of urban living, the planners and constructors of Hong Kong's roads have gone underground and overground in addition to staying at ground level. For instance, parts of Salisbury Road -- which many pedestrians dislike because of it being almost impossible to simply cross at ground level (and instead are forced into some of the many pedestrian underpasses and tunnels that crisscross Hong Kong to get from one side to another) -- run underground even while others are at ground level.

Incidentally, some people checking out this Photo Hunt entry might wonder how it is that roads in Hong Kong -- and in its equally Chinese sounding districts of Wan Chai and Tsim Sha Tsui -- might have such Anglophilic names. This is because even though British rule in Hong Kong came to an end on July 1st, 1997, Asia's World City has -- for better or worse -- not seen fit to go about wholesale wiping out traces of its British colonial past, Consequently, there not only remain parts of the Big Lychee that have retained their British names but, also, other parts of the cultural space that still feel distinctly British -- including such as its British pubs and the number one most popular spectator sport remaining association football (i.e., soccer to Americans).

Still, this is not to deny that Hong Kong is predominantly Chinese culturally. Also, the majority of non-Chinese in Hong Kong are actually other Asians as opposed to non-Asians -- and the largest non-Asian expatriate community is no longer British! In addition, the French also have a pretty significant cultural presence -- not least through its Le French May cultural extravaganza which, despite its name, now stretches from April through to June!! ;D
Posted by YTSL at 8:40 AM

Always interesting posts for Photo hunts as well as the great photos. Happy weekend to you YTSL

Nice one and cool. Happy weekend. Mine is up.

I would love to visit HK but would need to move out to one of those green areas you showed last week!
My 'Road' is here.

P.S. Gotta love Miyazaki! My kids adore his movies too and we learn wee Japanese from watching...have a lovely weekend!

Thanks for your regular visits and appreciation of my writings along with photos. :)

Am chuffed that you think so! :)

And here's a generic thanks directed at ya! ;b

Heheh... You might not realize it from my photos but I actually live in the city but try to make it a point to regularly hike and otherwise visit green parts of Hong Kong weekly! :D

Oh, there definitely are roads less travelled -- and even roads where cars are not allowed on them -- in Hong Kong. Check other parts of my blog if you don't believe me. And if you do, you'll also be likely to bump into familiar Miyazaki creatures... ;b

always an interesting read...i like the Anglophilic street names, they're easier to remember.:p

It sounds very very crowded. I like open spaces :)

I've heard how busy the roads are in hong kong . . . not a good spot for a break down. *smile*

The roads in Hong Kong are always full of vehicles. Its subway is as crowded but it is very convenient to move around in HK.

hi YTSL, your photos reminds me of Los Angeles.... These are great choices for this week's theme and I enjoyed reading your historical background. Have a great weekend.

Teehee at your comment -- and it really is all relative and dependent on what one is used to, isn't it? :)

After you get used to them, the Chinese road names often do become easy to remember too. Really! ;b

The nice thing about Hong Kong for someone like me who thinks variety is the spice of life is that one has easy access to both less crowded as well as crowded spaces. :)

Ya re the breakdowns: just think of the inconvenience that will be caused to your fellow vehicle drivers when this happens! ;O

Actually, I beg to differ... and, as a matter of fact, Salisbury Road in my photo surely doesn't look that crowded?! :O

One big difference between Hong Kong and Los Angeles is that Hong Kong is not really a car city -- instead, it's more a public transportation kind of place and I think if you look more closely at the photos, you'll see quite a few buses and taxis in them -- and then there's the MTR (underground trains) that can't be seen in the pictures...!

Hi YTSL, I remember on my first visit to HK in 1998, staying at the Park hotel on Chatham road south and walking along Salisbury road every morning, everytime I've been since the whole area has been seemingly never ending roadworks, have they finished yet?

i usually use the subway system to get around the city when i travel to HK. The frequency of MTR is superb, fast and punctual.

Cool perspective on both of these photos. Hope you have a great weekend.

Yes, the roadworks are finally finished! The construction I think you witnessed was that for the East TST MTR station and attendant underground tunnels (for the trains and pedestrians). The first few times I visited Hong Kong myself, one could walk across Salisbury Road. Alas, no longer! :(

The MTR does indeed have a lot to recommend itself. Still, ope you tried some above ground public transportation since it would give you views of the city that the people movers pass by. :)

Thanks and so far, so good re this weekend! :)

nice to see the road of HK. you found one portion that's not crowded.

Wow, those are some busy roads. Very interesting post.

Your posts are always so well written and informative. Your photographs give a good taste of the roads in your city.

Great pics! Really capture the bustling city roads :) I also think it might be a bit confusing too is all the road names were changed. So I don't blame them for keeping them.

My Photo Hunt entry for 'Road'

I often wondered about how much the Chinese would seek to wipe out the colonial history. Interesting that they haven't. Used to go to Gloucester Road in London often when I lived there and my dad lives just down the road from Gloucester. We have a pub called the Gloucester in Adelaide. Small world.

The general impression of Hong Kong does appear to be that it's completely choc-a-bloc full of people and vehicles. That's not true... at least not everywhere all the time. Really! :D

Does the photo of Salisbury Road look very busy to you? Some others seem to think so too -- but I don't. Guess it's all relative! :O

Thanks for taking the time to read as well as look -- as per usual for you. :)

True, true if all the road names got changed! In Malaysia, some road and place names have been changed from colonial times -- and have to say this often is not welcomed. Think the sense I get is that people prefer that the post-colonial government gives names to new roads but leave the old ones alone!

Woah... wouldn't have thought so at all from what I've heard of Manila! ;O

Well... think it goes to show that Hong Kongers *are* distinct from (other) Chinese... Re the existence of so many Gloucesters: don't think it's a sign of a small world -- rather, it's a sign of how vast the British Empire was! :D