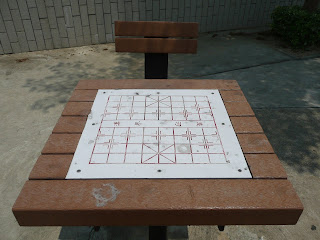 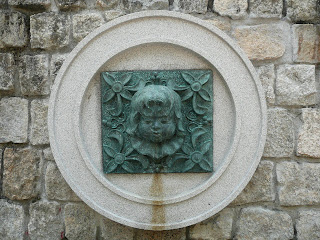 The upper photo shows the kind of square table with a permanent Chinese chess board (marked out in ways that divides the playing areas into what looks to be numerous squares) on its top surface that is frequently found in official "sitting out areas" in Hong Kong. (N.B. because Chinese chess is a two person game, there always are two chairs permanently attached close to the table -- it's just that I "cut" the second chair out when moving on for a close-up shot of the table! ;b)

The lower photo is of the Fountain of Luso taken in Macau's Lilau Square. A Portuguese residential quarter developed around that which historically where the main source of natural spring water in Macau was found and which now is situated deep within the UNESCO World Heritage-listed Historic Centre of Macao area.

A (once) popular Portuguese saying went to the effect that "Anyone who drinks from Lilau never forgets Macau". However, each time I've passed by the square, I've never seen anyone, Portuguese or otherwise, deigning to drink the water that still comes out there -- albeit as more than a trickle than healthy looking flow, and from out of the mouth of a metal cherub who may look cute enough but, frankly, not necessarily all that clean!

I've seen a table like that around here. Great shots.

Thanks for visiting my square. Have a fabulous weekend!

now that i'm bloghopping and seeing what other players are posting, i realized that there are a lot of possibilities. i was a bit stumped.

yes that was time's square in nyc taken 2 years ago. it might look different nowadays too.

the concept of chess boards on the sidewalk is so cool

Interesting version of the chess board. I've not seen one like that before!

Mine is an update on one I posted two weeks ago, which fits this week's theme but has an interesting addendum!

Nice shots YTSL, Lilau square is where the opening scenes of Johnnie To's Exiled were shot. I went there and that will be my next location post, I had a really good time there!

Never learned how to play chess but love seeing those chess boards out in the street!
square

So now you know what it's for, if you didn't already! :b

I left the US in July 2003 so was in Times Square longer ago than you. Used to go there for the half price theater tickets and consequently often when it was dark. So it figure that my memories of it differ from what I saw in your photos.

Was going to say that those chess boards aren't on the sidewalk except that some sitting out areas are indeed very close to the road! ;b

Something else you might like to know about those particular chess board: the pieces are placed on the lines rather than in the squares themselves -- unlike with Western chess. ;)

Yep, recognised Lilau Square when I saw "Exiled" (as my first visit to the square was years before I saw the movie). :)

BTW, have a few movie location posts of my own. Feel free to search this blog for them! ;b

I know how to play Western chess and Chinese (as well as Western) checkers... but don't know how to play Chinese chess, alas. But, yeah, it's fun to watch people playing -- they're so serious when doing so! ;)

Interesting as always. Have a lovely weekend. We are having an overcast, wet and cool one here.

I really like it when I see those outdoor chess tables - I can only imagine the tales those tables could tell if they were able to talk.

have a good weekend.

You found some great squares. I don't think I'd risk drinking the trickle of water from that either.

Hi YTSL, I knew you would think out of the box for this week's theme!
I am unsure about the plural of oasis but thin it may be oases, but it is seldom that we see more than one at a time in Oz!

Hi YTSL, great items for this week's theme of square.Thanks for your visit to my place today. Baba

Excellent! There are so many interesting takes on this week's theme.

Love the square fountain, but I don't think I'd want to drink out of it either. Both great examples for the theme :)

And yes Toronto's first courthouse is very near to my square pic :)

It's been largely overcast and wet here the past few days too -- but it's also been warming up and getting super humid -- ugh. I want it to stay pleasantly cool for a few more days, if not weeks, still! ;S

Tempted to play some Chinese chess on it? ;b

Can imagine many grand battles having been waged on those tables... ;b

I actually had to limit myself as I found pics of more than one Macau square! ;b

Thanks for your confidence -- and yes, I do try (to think out of the box for Photo Hunt)! :)

Ueah, over the course of this Photo Hunt, I too have definitely noticed quite the wide variety of interpretations of this theme. :)

Thanks for commenting re my entry and answering my query about yours. :)

Hi YTSL, two great choices and interesting backgrouds for each. I don't think I've seen a Chinese Checkers game board before. Perfect squares in them. And yes the little guy in the sqaure is cute enough, but I would also pass on a drink.:)

Chinese chess seems like an interesting game but i don't know how to play.

Those are great photos for this theme YTSL.

Have a happy weekend.

Correction: the board in the photo is for Chinese chess. Chinese checkers (which I can play) has a board that's got what looks like a star in the middle. :)

And hehe re that little guy in the square: don't think his dribbling looks all that attractive!

Chinese chess seems to be mainly played by older men from what I can see of the players who opt to use tables like the one in the photo!

More seriously though, thanks for visiting once again. :)

I love playing chess, but I have never seen such a board. I know that in Germany they have huge boards in parcs with big figurines like 3 year old children.

your 2 subjects have stood the test of time.. the hardest and most significant test there is :)

I've seen those large chess boards that you're talking about -- though not necessarily only in Germany. :)

Interesting thought but I wonder, though, how old that metal sculpture is! ;b

A square for fun and one for art. Well done!

Glad my entry meets with your approval. :b

If you click on the words in my entry, they'll send you to a page with more info re the game.