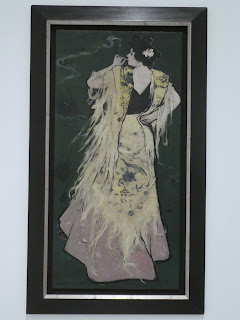 Artistic depiction of a smelly habit 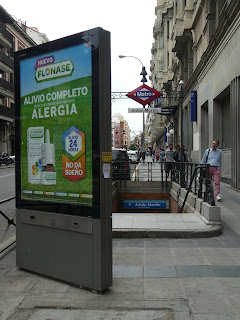 Allergens and allergy medication abounded
in Spain this spring! 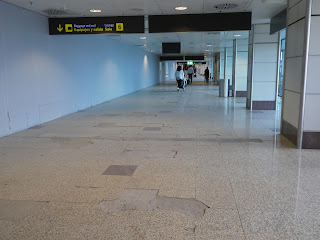 Earlier this month, a heatwave hit Spain that was so bad that it claimed the lives of several people.  Even before this news came along, I had known not to visit this country -- which attracted 82 million visitors last year, making it the second most-visited country in the world -- in the hot summer months.  If only I had known that springtime also is not an ideal time to visit the parts of Spain that I did; this because spring is prime hay fever season and Andalucia and the central areas of the country (where, say, Madrid is situated) regularly have high olive, plane tree and grass pollen counts!

As it was, my allergies kicked in pretty early on in my May Spain trip and my eyes were all watery, my nose all itchy and runny, and I was sneezing so badly that in the middle of my visit to the Museo Nacional Thyssen-Bornemisza, I developed a nosebleed which I feared that I would not be able to stem for a time!  With no fever having developed, I figured (correctly) that I had hay fever: for the first time in a decade and a half (because, ironically, I don't react as badly to the air pollution in Hong Kong!); and which was made worse by so many people -- women as well as men -- smoking like chimneys in the streets, while strolling about or when seated in the outdoor sitting areas of cafes and restaurants.

Things did not get better after my German friend and I left Madrid and headed over to Andalucia, with an antihistamine spray I got in the Spanish capital not helping much at all.  Fortunately, things vastly improved -- and pretty quickly too! -- after I got some 24-hour anti-allergy tables from a pharmacy in Sevilla a few blessed hours before our visit to the city's Real Alcazar.  Sadly, that was the same day that my German friend came down with a bacterial infection (whose symptoms included red eye and prolonged bouts of coughing) which I managed to stave off when I was in Spain but then was overcome with a couple of days after I got back to Hong Kong!

Partly because of our health problems, my German friend and I weren't able to enjoy our vacation and appreciate Spain as much as we would have liked to do so.  At the same time though, there were aspects of our trip and things about the country that I honestly think that, even if we were in the best of health throughout, we would not have been happy with.

Among them are the over-crowdedness of certain attractions and parts of the towns and cities we visited.  With regards to this: Cordoba was by far the worst; and so off-putting were my experiences there that I ended up opting not to go to the even more celebrated Toledo, which had actually been top on my list of places (along with Granada's Alhambra) to visit in Spain prior to my trip.  And things were not helped by many of the super crowded spaces -- including Madrid's Puerta del Sol -- often feeling like prime petty crime (specifically pickpocketing) territory.

A note on Spain and pickpocketing: before our trip, both my German friend and I had heard horror stories about and got warnings to watch out for it from various people.  And while walking on a street near the Museo Nacional Centro de Arte Reina Sofía on my final day in the country, after I felt pressure on my backpack and quickly spun around to see what was going on, I saw a woman with a large plastic bag walking quickly away from me -- and feel pretty certain that she had been planning to steal stuff from me!

Continuing with the tales of theft: on my plane out of Madrid later that day, the two women seated in my row (who, suspiciously, were the only other Asians on the aircraft!) told me about their backpacks having been slashed and stuff having been taken from them while they were walking along the Camino de Santiago!  And they too had heard stories of other fellow travellers having been victims of pickpockets and were inclined to conclude that tourists are specifically targeted by Spanish petty criminals.

Living as I currently do in a part of the world where one's personal safety and security tends to be assumed as a matter of course (so much so that I feel perfectly able to be out late at night), it can be quite unsettling as well as disheartening to feel obliged to be on one's guard against being taken advantage of by others.  Also rather upsetting was my seeing as many beggars on the streets in Spain, particularly Madrid, and also the buskers and itinerant street hawkers who seemed far more like panhandlers than bona fide entertainers or vendors.

I had read about the Spanish financial crisis but thought that the country was on the road to recovery.  In my short time in Spain, however, I saw plenty of signs that quite a few people and institutions remain financially strapped and economically troubled, and my general impression is that this is a country whose glory days are way past and is a shadow of what it used to be (and may still perceive itself to still be, especially vis a vis countries located in others of the world's continents).

For these reasons, among others (that I don't want to go into, at least not in this post), I actually came away from my Spain trip thinking that it will be my final as well as first visit to the country.  And this despite my having seen some really amazingly beautiful sights (created by Muslims and pagans as well as Christians who lived centuries before) in various cities and also my having tasted a variety of dishes that got me thinking that Spanish food may well have become my favorite European cuisine. :S
Posted by YTSL at 11:59 PM

Oh wow. Allergies, crowds and pickpockets. Are you sure you don't want to give Spain one more chance and indulge in more jamon ibericos bellota, perhaps in the fall at some of the less touristy towns? I agree that Madrid (and Barcelona is probably worse) is pickpocket mecca, but outside of the largest cities we never detected any signs of riff raff even at long distance bus and train stations. Of course I haven't visited the south yet, and would really like to combine Andalusia with Portugal.

I'd be interested in what you make of Andalucia if/when you go there. Madrid definitely felt the least safe of the cities I was in as far as pickpockets go but Granada had its dodgy feeling sections too while I felt safest in Segovia and El Escorial.

At this point in time, I'm far more willing to visit a number of other countries (again) then Spain. E.g., I just booked my next set of flights this morning -- for Japan once more!

This is a somewhat downbeat coda compared to your previous Spain entries, but you do shed a truthful light on the hassles of over-crowded tourist sights and - especially, on the health issues that often befall the traveler when visiting a foreign country. (This is strictly a personal comment, but travel to Spain never really interested me, at least partly because of the past explorers who sailed from this country to the New World and slaughtered so many indigenous people in the name of their Savior).

I guess you and Ponyo will have to detox your respiratory systems in a more refined and safer environment somewhere in Japan, free from the prying hands of street thieves.

After I got back from Spain, a number of people asked me what I thought of it. I told them that I was in two minds about the country as I had experienced both good and bad in my fortnight there. And I trust that those who read my blog posts can see and know what I mean by that.

Also, yes, Puppet Ponyo and I are indeed looking forward to our next Japan visit. More surprising might be the fact that the air in Hong Kong -- which often is not looked upon as not optimal at all -- actually seems to agree with more than that of Spain's but it is true too that my nose seems to react better to high than low humidity!

Hard to go anywhere these days of special interest where you don't feel you are a speck on a beach of tourists. Global tourism has just increased so much over the past 15 years with nations like China and Russia jumping into the fray. I hate crowded spaces but really want to see Spain.

Within Spain, Segovia was surprisingly uncrowded. I also appreciate that the Alhambra limits visitor numbers. Even within my favorite country to visit: I now would have serious reservations about going to Kyoto but there are many parts of it which are remarkably uncrowded, including UNESCO World Heritage list-ed sites.